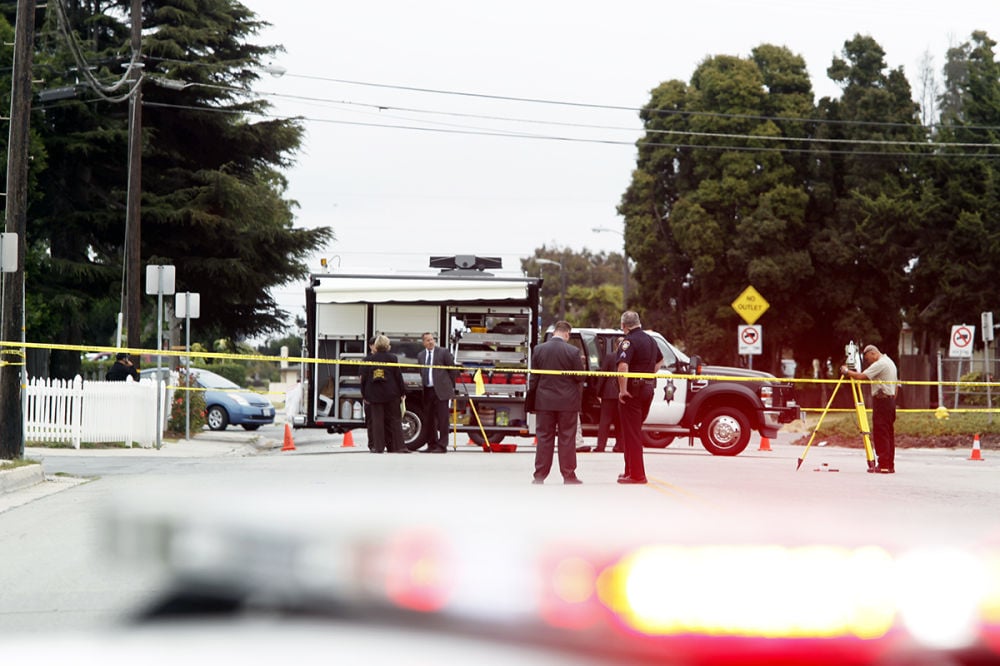 Police officers and investigators from the Monterey County District Attorney's office walk around Fairview Avenue in Salinas on Thursday morning. 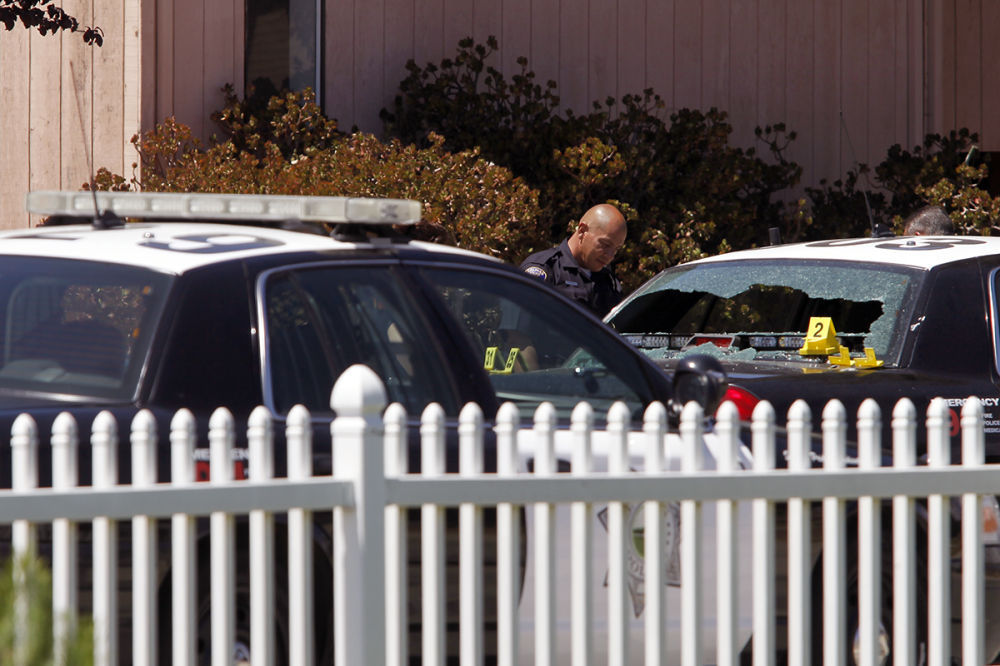 A broken, rear window of a Salinas police patrol car is marked with evidence tags on Beverly Avenue in Salinas. 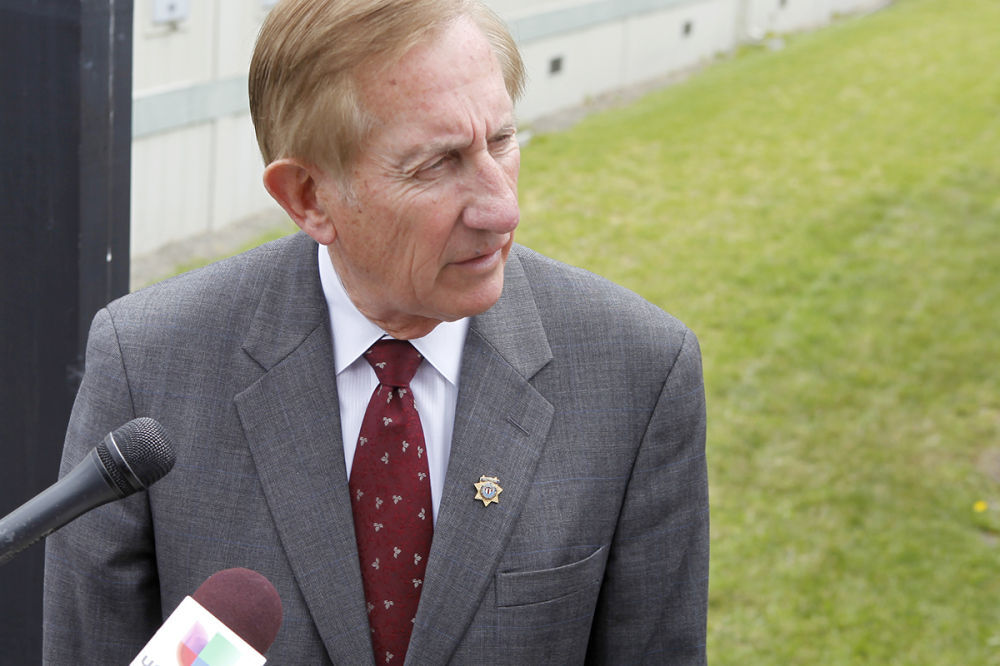 Monterey County District Attorney Dean Flippo talks to members of the media during a press conference on Thursday morning. 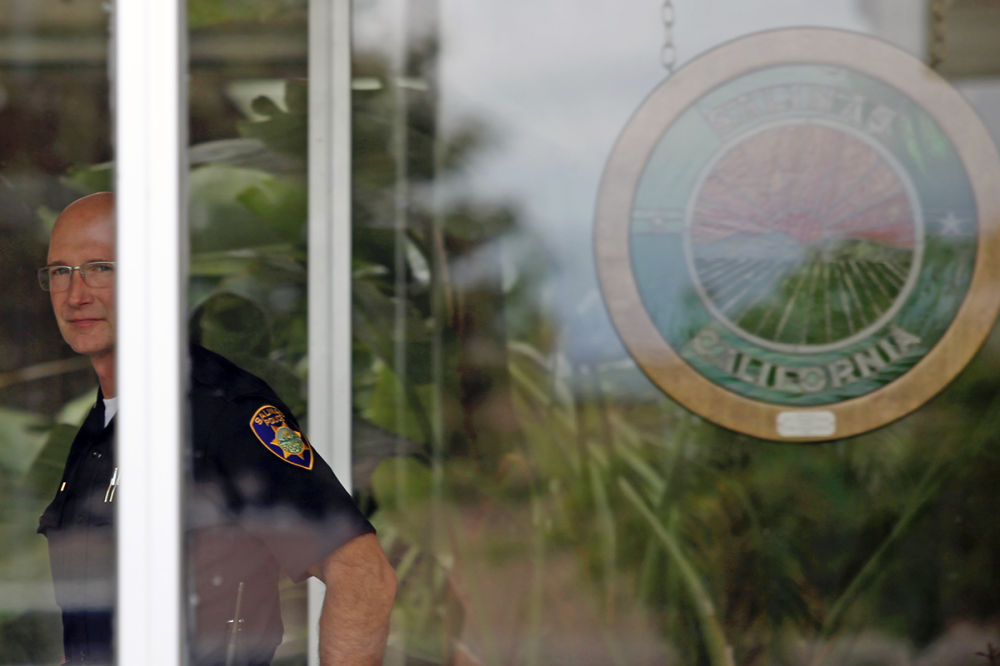 Salinas Police Chief Kelly McMillin looks out from Salinas City Hall before he hosted a press conference on Thursday morning.

Frank Alvarado sits in his grandfather's home on McGowan Drive in Salinas in May 2014.

Police officers and investigators from the Monterey County District Attorney's office walk around Fairview Avenue in Salinas on Thursday morning.

A broken, rear window of a Salinas police patrol car is marked with evidence tags on Beverly Avenue in Salinas.

Monterey County District Attorney Dean Flippo talks to members of the media during a press conference on Thursday morning.

Salinas Police Chief Kelly McMillin looks out from Salinas City Hall before he hosted a press conference on Thursday morning.

After Frank Alvarado was released from prison in July 2013, he said he searched on Facebook for the man he had tried to kill. He found him and apologized.

"I'm sorry for being that person that I was before," Alvarado said he told him.

Alvarado served 10 years in prison for attempted murder, stemming from an incident in which he pulled a gun and opened fire on his sister-in-law's husband. The man, Alvarado said, had tried to run over Alvarado's own wife with a car.

In an interview with the Monterey County Weekly in late May, Alvarado spoke about his ongoing struggles with anger and his plans for the future. The decade in prison, he said, combined with numerous therapy and self-help groups he busied himself with while incarcerated, left him changed.

"You can either build yourself a harness and pull yourself out of a hole, or you can hang yourself," he told the Weekly, when asked about his post-prison struggles. "My mom's asked, 'What's it going to take for you to change?' I said, 'I need to leave this place.'"

Alvarado said he planned to ask his parole officer for permission to leave the state and seek work at an ethanol plant in either North Dakota or Nebraska, where he could earn higher wages than his odd jobs locally paid, painting and removing asbestos.

He was shot and killed about 5am today by Salinas Police officers who had responded to an as-yet unexplained call for assistance by a citizen. The shooting took place on Beverly Street near the corner of Fairview Avenue, outside the First Assembly of God church. It was just a few blocks from where Alvarado had been living, in his grandfather's house.

It's the fourth fatal officer-involved shooting in Salinas this year. In separate incidents, Angel Ruiz, Carlos Mejia and Osman Hernandez were also killed by police. Family members of Mejia and Hernandez have filed civil claims for wrongful death against the city.

The unidentified officers involved in this morning's shooting were placed on routine administrative leave. Salinas Police Chief Kelly McMillin, at an 11am press conference at Salinas City Hall, said he requested that the Monterey County District Attorney's Office take over the investigation.

McMillin was unwilling to offer any details on the incident, including whether Alvarado was armed or why officers had been called in the first place. He also declined to say if Alvarado was dead; that was confirmed by the Monterey County Coroner's Office.

District Attorney Dean Flippo said he received word of the shooting from his supervising investigator, Ryan McGurk, at about 6am. By 7am, he had dispatched eight DA investigators to the scene to take over from the Salinas PD, based on McMillin's request.

"It is the prerogative of the chief, or it could be the sheriff, to either do the investigation or contact the District Attorney's office," Flippo said at an 11:45 press conference. "Our people are still out there, they are still working."

Flippo, too, was unable to say if Alvarado was armed or give any information about the call to police that led to the fatal shooting. He also couldn't say how many officers were involved, or how many shots were fired.

Neighbors near the church reported hearing up to a dozen shots.

"We are still gathering information. I don't want to put out any information that may be incorrect or may mislead people into thinking something," Flippo said.

Investigators told Flippo that Alvarado was taken by ambulance to a hospital, but he wasn't sure if Alvarado died en route or was declared dead at the hospital.

Alvarado's girlfriend confirmed he was the same Frank Alvarado who spoke to the Weekly for the May 29 story on parolee reintegration into society. But she and his family, she said, were too distraught to speak further at this time.

Issue October 15, 2020 - Shelter-in-place means tending to our homes, indoors and out.