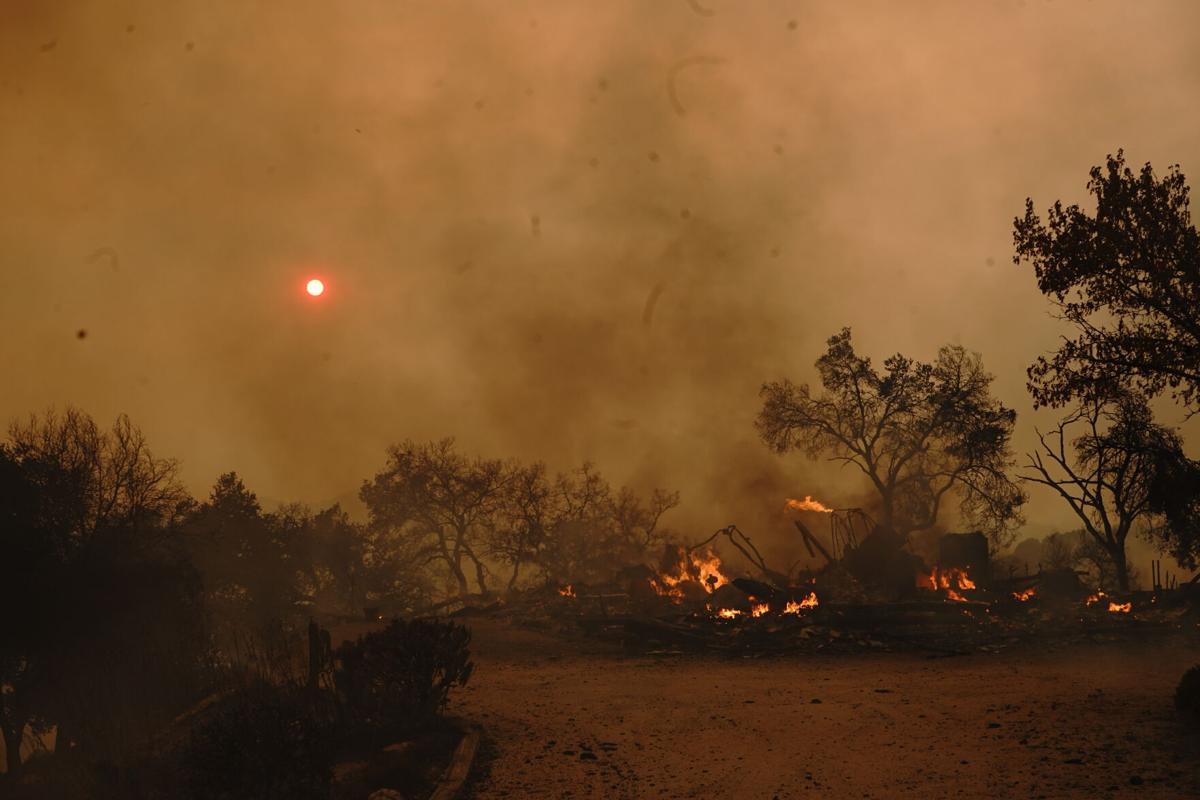 Within hours of igniting, the Carmel Fire has burned multiple structures. 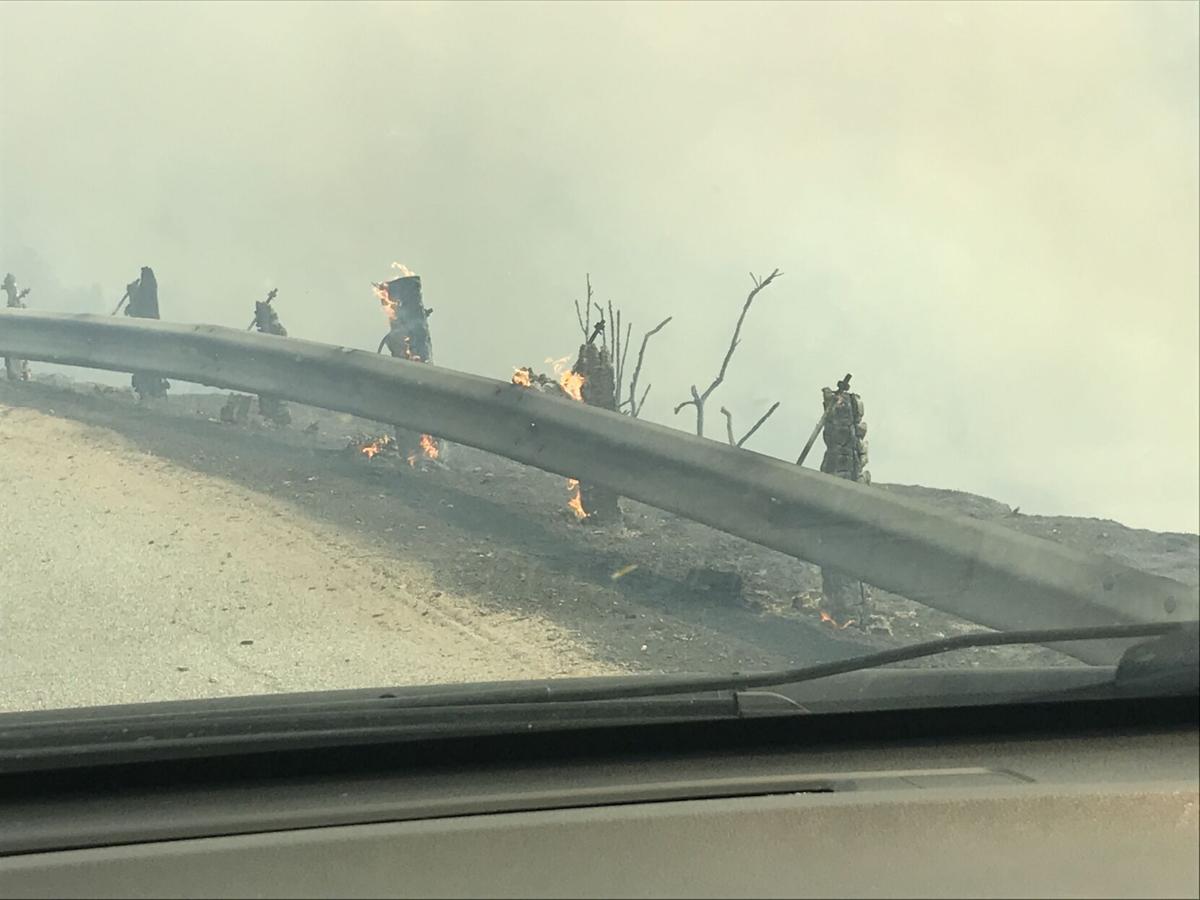 The smoky view from Cachagua Road near Sky Ranch. 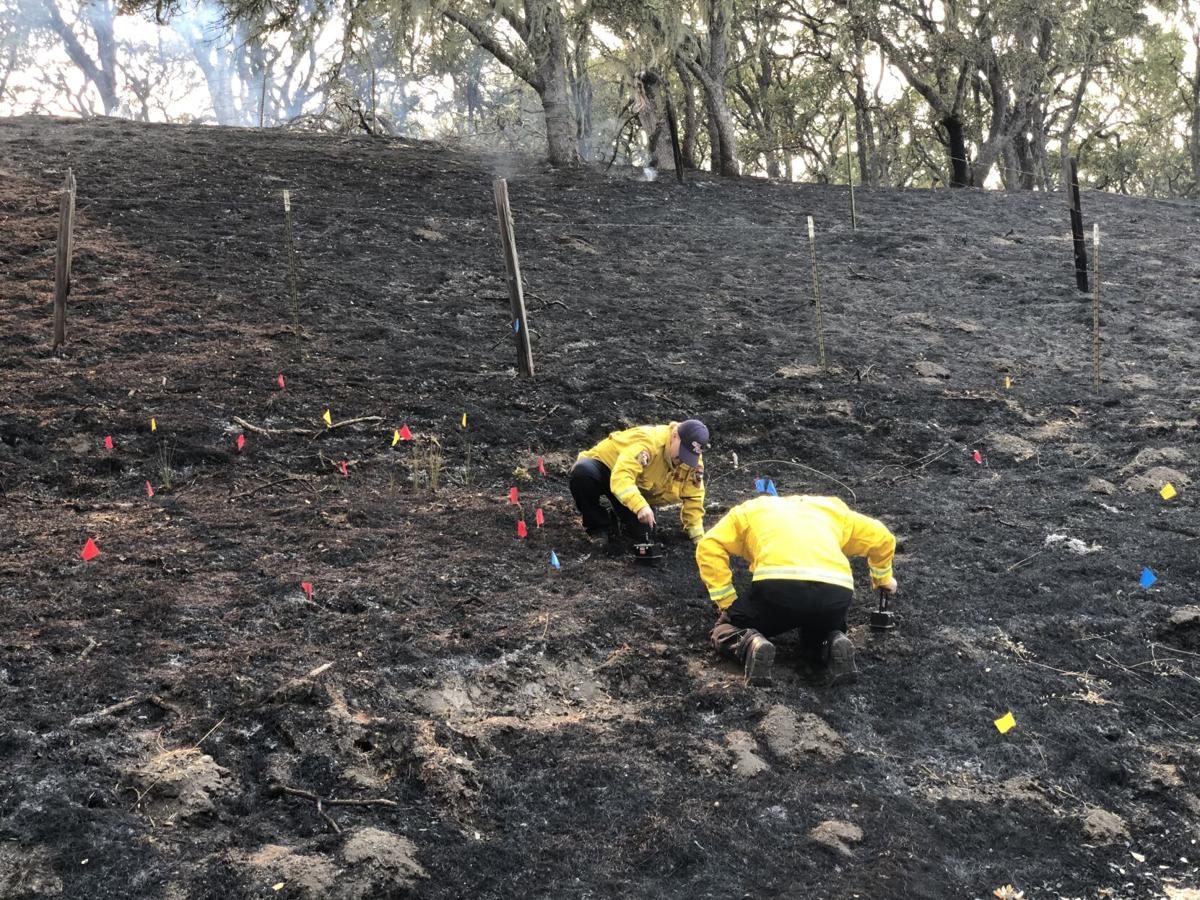 Investigators look at the area just off Cachagua Road where the fire is believed to have started as they seek to determine the cause of the fire. 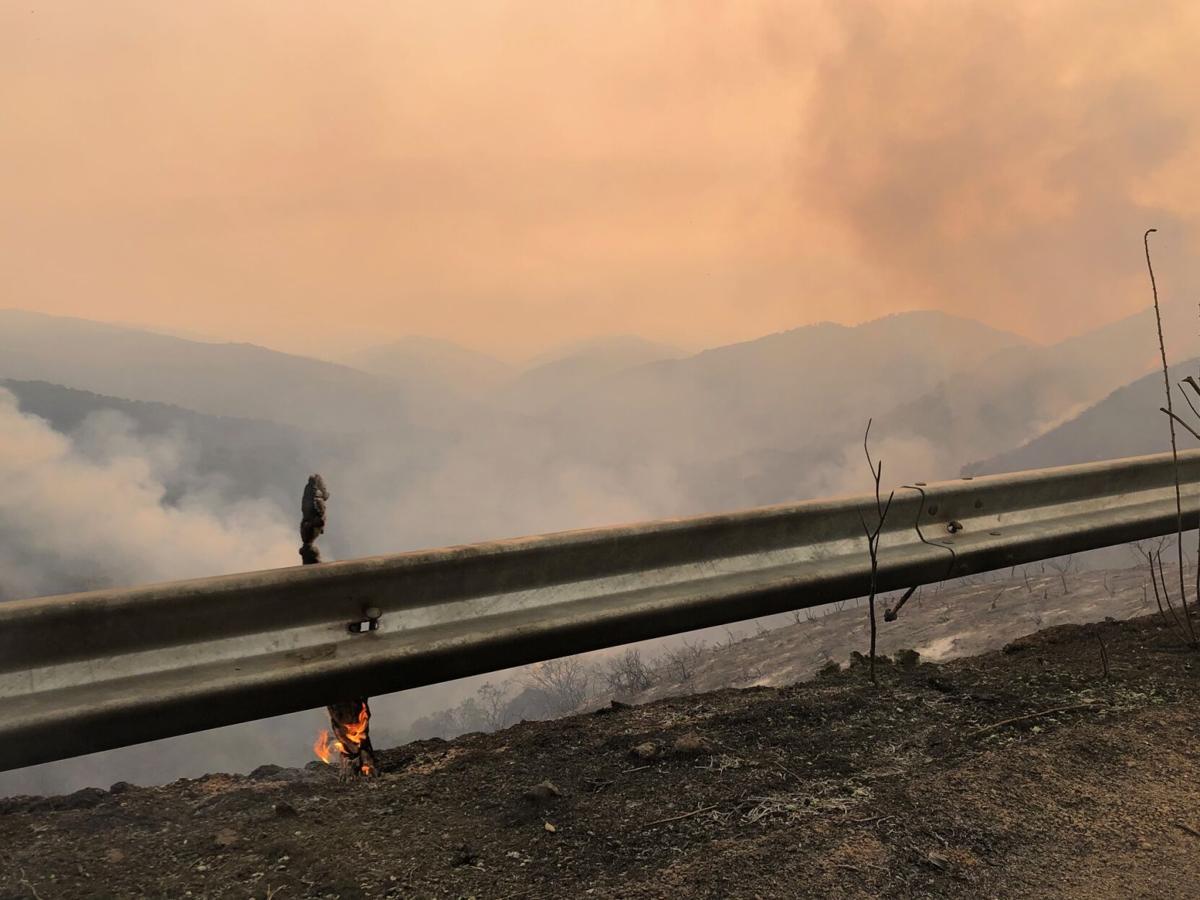 The view from Cachagua Road around 5:45pm on Aug. 18, about five hours after the Carmel Fire started and grew to roughly 500 acres. 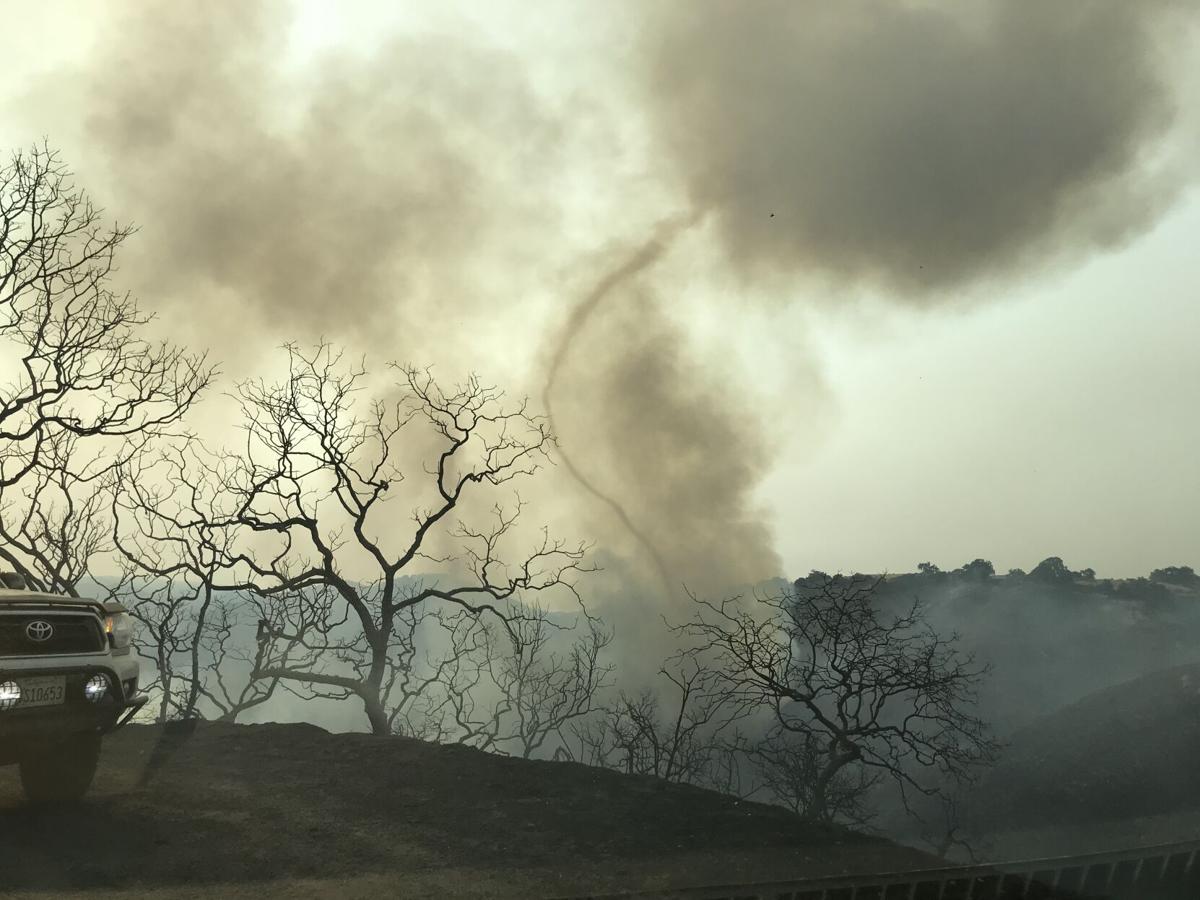 Smoke from the Carmel Fire on Aug. 18.

Within hours of igniting, the Carmel Fire has burned multiple structures.

The smoky view from Cachagua Road near Sky Ranch.

Investigators look at the area just off Cachagua Road where the fire is believed to have started as they seek to determine the cause of the fire.

The view from Cachagua Road around 5:45pm on Aug. 18, about five hours after the Carmel Fire started and grew to roughly 500 acres.

Smoke from the Carmel Fire on Aug. 18.

While hundreds of firefighters attempted to tame the River Fire burning near Salinas on Tuesday afternoon, another fire, this one faster-moving and more aggressive, began around 1pm just off of Cachagua Road roughly one-and-a-half miles south of Carmel Valley Road.

Within an hour, the Carmel Fire had grown to 40 acres; by 5pm, to roughly 500 acres, though Incident Commander Roger Rinehart says it is difficult to determine an accurate size due to the smoke from the River Fire. The fire is zero-percent contained.

By 4pm, the sign for the Sky Ranch community up Cachagua Road was totally scorched and unreadable; at the entrance to the development was the body of a house cat that had been burned alive.

At least a half-dozen homes were actively burning, with skeletal remains of scorched trees around them.

Evacuations were ordered within an hour of the fire igniting for all residents above the fire line, who were instructed to leave via Tassajara Road, which intersects with Cachagua Road to the east; the lower portion of Cachagua Road to Carmel Valley Road is fully closed. At least a dozen horse trailers left via Tassajara Road, some relocating animals to Cypress Stables in Carmel.

Investigators laid flags around the area where the fire started and are actively investigating the cause of the fire.

Firefighters are preparing for a challenging firefight ahead as the fire burns on the south side of Cachagua Road, moving southeast toward Tassajara Road.

"The terrain up here is extremely challenging," Cal Fire spokesperson Tony McHale says. "This is the supreme challenge of firefighters, especially with the weather, very hot and very dry."

They note the flammability of fuel—firefighter-speak for the vegetation that can burn—with particular attention to especially flammable lichen, commonly known as Spanish moss.

With fires burning all over the state, Cal Fire is working to share resources across fires. They share personnel, and equipment, including airplanes and helicopters to drop water and retardant; there's an emphasis on fighting the Carmel Fire from the air due to the steep and inaccessible terrain in the area.

And there's an emphasis on putting it out fast, before it gets out of hand and burns adjacent wilderness areas.

Sara Rubin contributed to this report.

Editor's note: The Weekly has updated the lead photo with this story to reflect the damage to property without identifying a specific home.

Founding Editor & CEO of the Weekly, September 1988. Bradley serves as the Free Speech Chair on the board of the national Association of Alternative Newsmedia.

Did you get permission from the owner of this home before trespassing on his property to use this photo of his entire life burnt to the ground?!