Fairy tales are a version of the classic hero’s journey, a quest where adversity is overcome, a pretext for a voyage of self-discovery. Kaye Coleman has been on such a journey as part of a Pacific Grove fairy tale, serving in 1993 as queen of the town’s annual beloved tradition, Feast of Lanterns. Coleman’s journey winds its way to joining the board of directors in 2012, later becoming president.

During her time at the helm that ended in January, she worked to move the board toward changing elements of the feast, which had increasingly faced criticism that some aspects, especially the closing pageant called the “Legend of the Blue Willow” set in ancient China, misappropriated Chinese culture.

Coleman came to her own conclusion that the pageant had to be changed after receiving numerous negative public comments and her conversations with Chinese Americans who expressed to her how hurtful to them some traditions contained within the pageant were. Coleman formed a friendship with one woman in particular, Gerry Low-Sabado, a descendant of residents of P.G.’s Chinese fishing village that was destroyed by a fire in 1906, on the site of what is now Hopkins Marine Station.

Low-Sabado had asked the Feast of Lanterns board in 2008 to remove some parts of the play she found most objectionable, like one in which a character is booed by the audience.

“I want to know why the villain must be Chinese, especially in the town where the Chinese fishing village burned down,” Low-Sabado told the Weekly last year.

The board made no changes at that time in response to Low-Sabado’s request. In 2016, Coleman, then president of the board, began meeting with Low-Sabado. Coleman says their conversations influenced her to at first make small changes in the pageant’s script. Audiences didn’t seem to notice.

After more discussions, the board voted in 2018 to rewrite the pageant story and earlier this year, approved a draft script of a completely new story set in Pacific Grove over a century ago. Plans were in full swing to present it at this year’s Feast of Lanterns on July 25. Then Covid-19 scuttled all large gatherings.

That has not stopped the drama, however. After years of board discussions, all agree changes need to be made. Now the disagreement is over publicly stating why.

Recently Coleman and the board, now led by co-presidents Sherry Sands and Christine Gruber, ran into disagreement after Coleman submitted an article called “The Anatomy of Conscious Change,” detailing the history of the feast and her realization about it. She says it came out of a lot of self work and research, including attending a workshop on restorative justice.

“I had to face the facts that lay before me and begin to reconcile my white privilege and how it blinded me from seeing that the event could be interpreted by others in the community in a hurtful way,” she wrote. She hoped the board would publish her piece in the annual program and on the website. 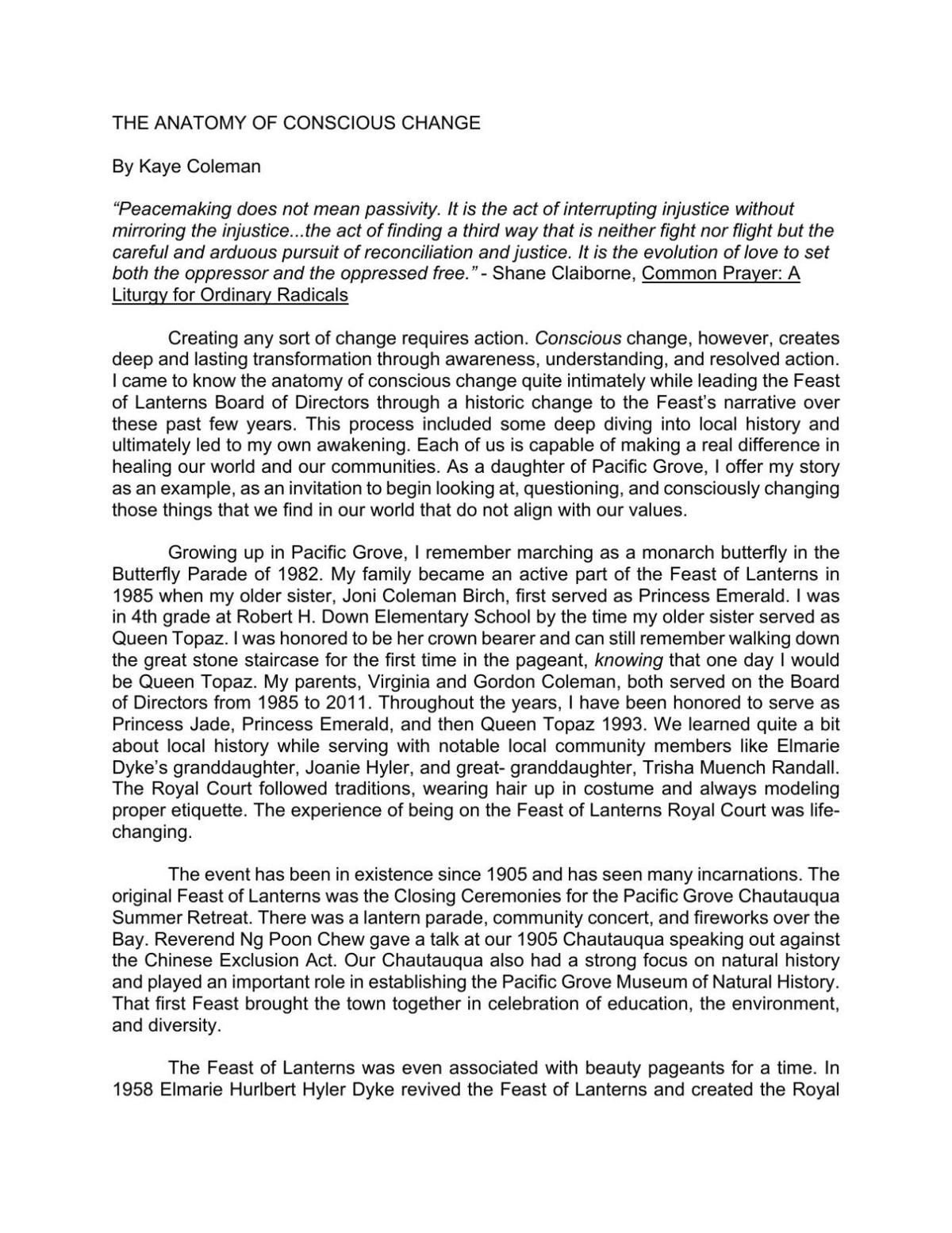 Sands and Gruber say they don’t disagree with the premise, but do not plan to publish it. It’s her personal story that does not reflect the views of the board.

“We both fully agree that a change needed to be made out of respect for Chinese descendent communities,” they write by email. “We needed to do what was right and remove elements from the story.”

Sands also suggested that Coleman’s statement was too political. “My personal feeling is that the Feast of Lanterns is not to be a political statement. Period,” she says. (Ironically, they are willing to wade into a long-time political issue concerning LGBTQ+ issues by welcoming any students of any sex or gender to wear a prince or princess costume, assuming whichever role they prefer.)

Coleman left the board recently to pursue graduate school but wants to stay connected, teaching history of both the feast and Pacific Grove to students who serve as the feast’s Royal Court, as well as helping them with public speaking skills, considered an important part of the program. Students who are chosen for the court perform community service during their terms and make multiple public appearances at schools and events. During SIP, those appearances have been limited to Zoom calls to classrooms and reading stories on the Feast of Lanterns’ Facebook page.

The new story takes some elements of the old to become a fantastical tale featuring princesses (or princes) and mystical characters. Like the old story, there are still a pair of young lovers in peril who overcome adversity. Events unfold during the Chautauqua Summer Retreat, a real P.G. event from the early 20th century celebrating education, the arts and natural history.

Before the shelter-in-place order, the board chose its princesses for 2020 and outfitted them with new costumes that resemble the Medieval-type gowns worn by Western European-type Disney princesses, replacing the old costumes resembling Chinese dresses.

Sands and Gruber expect blowback from some P.G. traditionalists who wanted the feast to remain unchanged, but hope that by the time the event returns, strong feelings will have subsided.

“Maybe it’s good that it’s delayed a year,” Sands says. “I just want everyone to come and judge it on its own merits.”

Thanks for doing this article, our family has never participated because of the racial deafness it displays. Years ago watching a clip on the news my children asked why no actual Chinese people were in the actual play, good question kids! We all joke it’s a P.G. Thing, but in all seriousness, for 30 years (since I was a child) I have always wondered why our community didn’t celebrate our rich Native American culture , since we are all living on what was their land. I and I’m sure many others would not mind if the Caucasian version of what they think is a Chinese festival, would go away all together, my Asian partner , would definitely agree!

Issue July 30, 2020 - The pandemic created an urgent need for aid. New grassroots groups alongside legacy nonprofits have stepped up to fill it.