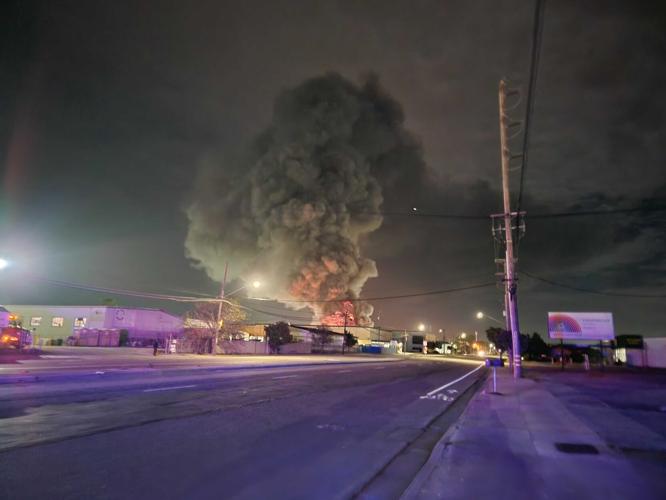 A view of the Taylor Farms fire on Wednesday night, April 13, from Sanborn/Blanco Roads and Abbot Street in Salinas. 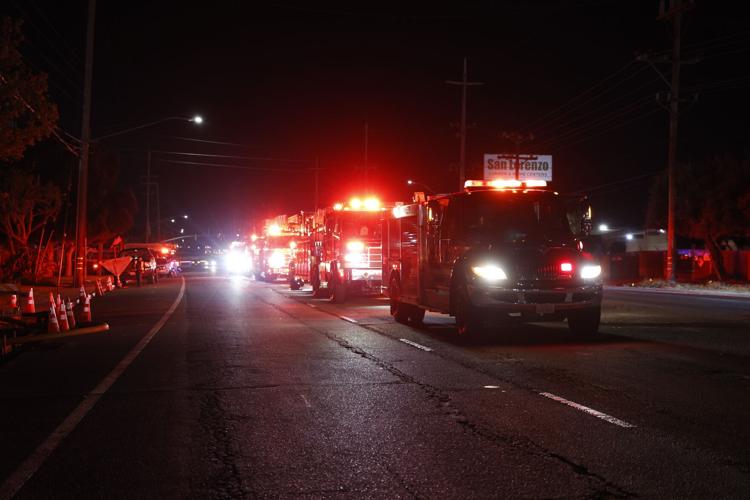 Fire agencies from all over Monterey County responded to the four-alarm fire, which went beyond Salinas Fire Department resources. 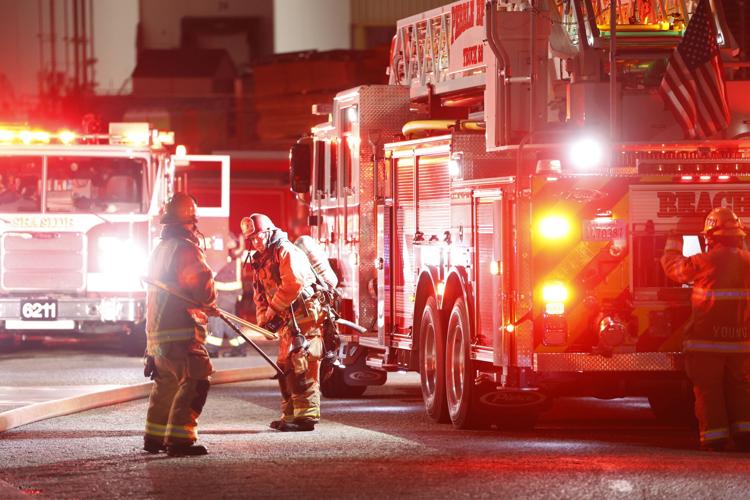 A view of the Taylor Farms fire on Wednesday night, April 13, from Sanborn/Blanco Roads and Abbot Street in Salinas.

Fire agencies from all over Monterey County responded to the four-alarm fire, which went beyond Salinas Fire Department resources.

On Wednesday night a large trail of smoke could be seen from Salinas. The Taylor Farms processing facility—a 225,00-square-foot building located at 1207 Abbott St.—was ablaze.

Over 22 fire units from Monterey County responded to a four-alarm fire that was “beyond the scope of Salinas’ resources available at any given time,” said Sam Klemek, deputy chief with the Salinas Fire Department and incident commander.

Crews took a defensive approach, making sure to contain the fire within the building. The fire was tackled from the outside with ladder trucks and firehoses. Around 11pm all firefighters retreated from the scene for safety reasons.

“The fire progressed to the point that it poses a significant risk for a potential explosion of ammonia that is located in the plant. For that reason, we pulled back our units to a safe area and have begun evacuation notices for the immediate area around the plant,” Klemek said.

After midnight, an evacuation was ordered for the neighboring buildings and areas in South Salinas between South Main Street, East Alisal, Alisal Road and Harris Road. The railroad tracks were closed as well, and first responders moved unsheltered people out of the area.

As of 4 am, 75-percent of the roof structure had collapsed and fire officials were considering closing Highway 101 from Chualar to John Street.

The Monterey County Office of Emergency Services posted an interactive map showing the different affected areas. The map shows a three-tiered system: Red for the 1-mile radius evacuation area, purple for shelter-in-place area and blue for advisory. Residents in this final area should monitor the incident and be ready in case of shelter-in-place or possible evacuation. People sheltering in place should close their windows and turn off their ventilation systems. As of 10:15am, April 14 shelter-in-place and evacuation orders remain the same.

According to MCOES, the threatened areas are South and East Salinas. About 2,700 residents—548 addresses—have been evacuated and around 35,000 people (7,000 addresses) are under shelter-in-place. The roads are closed on Abbott Street between Spreckles Sanborn Road/E. Blanco Road and Airport and Tervin.

Salinas Union High School School District closed all its schools today, April 14, as half of the students they serve are in the shelter-in-place area. Salinas City Elementary School District is on spring break.

“It’s a pretty significant fire for our city,” Salinas Mayor Kimbley Craig said last night. The cause of the fire is believed to be due to maintenance work. Klemek said the cause isn’t suspicious at this time.

In a press release, Taylor Farms announced that the facility had been closed for the winter season, but that they had planned to move operations from Yuma, Arizona, to Salinas, as happens every season. For now, the company will continue to operate in Yuma and said they will continue supplying goods. “We will work to reassign and support our Salinas foodservice production team this season as we rebuild the facility,” the press release states.

Taylor Farms’ CEO was at the scene briefly watching the building being consumed by flames. “His main priority is making sure that the employees are cared for and then they get operational in the safest way possible,” Craig says.

As of 6am this morning, the fire is contained. However, firefighters expect it will continue to flare for the next few days, and are concerned about potential ammonia leakage.

“The fire progressed to the point that it poses a significant risk for a potential explosion for ammonia that is located in the plant,” Klemek said.

The facility is a cooling and packing facility, which is why there is ammonia throughout the building. Klemek said the fire was moving towards the main ammonia tank storage. “Tanks are isolated by some thick concrete walls to some parts of the system overhead that has a potential to collapse,” he said.  Fire officials said they are hoping the fire stays contained within the building.

Hazmat teams, specialists who trained to handle hazardous or dangerous materials, are at the location to assess the situation and respond to a possible ammonia cloud.

Klemek added they will have a meteorologist on the scene to monitor weather conditions and air changes in the area. “We're dealing with ammonia, and it works like a cloud and it travels with the wind direction,” Klemek said.

So far there have been no injuries reported by Taylor Farms workers nor fire personnel.

This is a developing story.

Issue May 19, 2022 - Moved by poetry, artist Enrique Martínez Celaya presents his own take on Robinson Jeffers and the art of exile.