On April 6, a group calling itself Committee for Sound Water and Land Development on Fort Ord filed suit against Seaside, the city council and KB Bakewell Seaside Venture II (aka, developer Danny Bakewell), asking a judge to set aside the environmental impact report prepared for Bakewell’s years-in-the-making Campus Town project. The lawsuit also asks a judge to revoke the construction approvals, premised on the idea that Seaside failed to properly address the environmental impacts of the massive development.

At the time, Campus Town supporters wanted to know: Who’s really responsible for the suit? Steve Herum, the Stockton-based attorney representing the plaintiff, says keeping his client’s identity confidential is their First Amendment right, and he pointed to the case of NAACP v. Alabama, in which Gov. George Wallace tried to force the NAACP to reveal its membership rolls before issuing them a permit to march, as proof.

But in May, in communication sent to Seaside City Attorney Sheri Damon, someone on Herum’s staff accidentally included the client’s name, both in the subject line and in the body of an email. Herum described it as “human error,” and stated in a court filing that a secretary named an entity other than the Committee for Sound Water and Land Development, but that she immediately recalled the email and thought she had succeeded.

The case landed in Monterey County Superior Court for a hearing on July 7, after Damon told Herum she no longer believed the identity should remain secret following that accidental disclosure. Judge Thomas Wills declined to rule on whether to keep the name confidential.

“It’s an interesting issue,” Wills said, “but I don’t think it’s properly before the court at this stage. We can’t render advisory opinions.”

Damon told Wills that in response to a California Public Records Act request, she intended to disclose the name. And as a result of that PRA request, filed by the Weekly, Seaside released the email showing who Herum’s client is. It’s Paul Petrovich, a developer working on another massive development in Seaside.

Petrovich currently has an exclusive negotiating agreement with Seaside for the Main Gate development project. In an April interview, Petrovich told the Weekly the lawsuit wasn’t his. Going against Campus Town, he said, “would be political suicide” because his retail-centric project depended on Campus Town housing being built.

“If you can’t see a house anywhere you want to build retail, it will never be developed as retail,” Petrovich said. “I need homes to be built near my project and I want the Campus Town homes to get built. What kind of political suicide would suing be?”

Petrovich was reached via text message on the afternoon of July 7 after the court hearing and Seaside’s release of the document to the Weekly. “Am I happy about Herum’s mistake and the pall it’s put on me and the four years and millions of dollars I have spent trying to bring the best mixed-use project Seaside will ever see? No I am not,” he writes.

Damon says the email disclosed today and the lawsuit could speak for themselves.

Petrovich further states via text that he is not a member of the committee who sued Seaside over Campus Town. “I did not lie and please stop with that line of thinking and accusing me of such things. It’s irresponsible and can further damage me, my relationship with the city and my sincere and extraordinary efforts to develop Main Gate.”

In an email response to a request for comment, Herum writes: “A secretary of our office working remotely at home in pajamas committed a human error. She immediately recalled the email with the error and sent a corrected email. The…document is clearly a document prepared for and by the Committee. The city waited a week before disclosing it got the first and erroneous email. People commit mistakes and errors, look no further than the first chapter of Genesis. The Committee is my client. As my opposition papers explain the verification is signed by a committee member who is also a Seaside resident. The judge took this important fact into consideration.”

Bakewell, whose plans for Campus Town include 1,485 housing units, hotels, 150,000 square feet of retail, restaurants and entertainment as well as light industrial space on 122 acres on the former Fort Ord, says he wouldn’t have expected such a move from Petrovich. Campus Town received its approval from the city council on March 5.

“It’s sad. I would not have expected that of him and I think he denied it to the city,” Bakewell says. “It’s sad for someone who is trying to do something positive for the city of Seaside. I’m interested in moving on and getting our project done.

“We don’t feel we have to dim someone else’s light for our light to shine.”

At that March 5 council meeting, Bakewell rallied the troops, bringing out dozens of Seaside activists, wearing “We Love Campus Town” T-shirts, to advocate for the project on the premise that it was finally time for Seaside to benefit from its Fort Ord land holdings.

Ronald Britt, a pastor and head of the Seaside Fairness Coalition, says Campus Town has the support of the coalition and the citizens of Seaside.

“The Bakewells have a long history of positive development and civic action in our city. We condemn the actions of Mr. Petrovich as they were not made in the best interest of the city and were conducted in a decidedly clandestine and underhanded way,” Britt writes. “To not identify himself as the source of the legal action was misleading and dishonest. As Chair of the Coalition, I would hope that Mr. Petrovich steps away from impeding the progress of Seaside and that City Officials consider other ventures and plans for the Main Gate property.”

Why affiliate with a suit over a rival project? Some observers think Petrovich wants more water for his own project.

Herum, in an email, writes that the committee’s original petition “reveals a major concern centers on the failure to adequately address and evaluate whether a real water supply exists for this project and the regional consequences of this project demanding such a significant amount of the limited remaining unclaimed water supply.

“This is an issue raised by other individuals and groups during the hearings.

“There is also a major concern that unlike other master plans there is not a linkage between building commercial and building houses,” the email continues. “Under the approvals the developer could build out the housing and walk before any commercial was constructed. A major ask by the committee in settling this matter is that a mechanism be added to assure that the commercial will be built out as the residential is built out.” 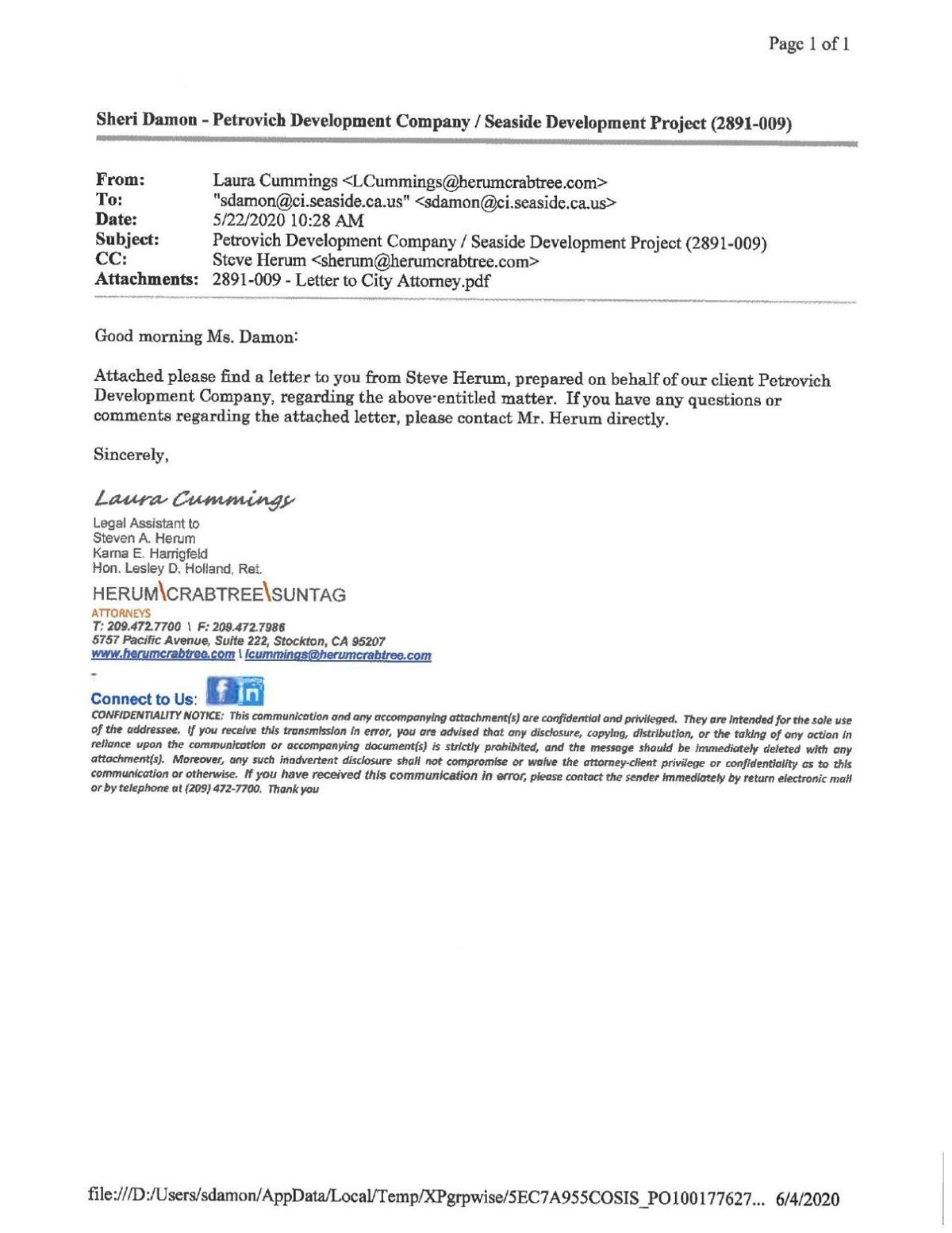 A case management conference has been set for Oct. 6.

What does the clothing of the secretary have to do this? Such an odd response.

Issue February 25, 2021 - Shopping local is one thing. Can you keep your cash – and your investments – circulating in the community?