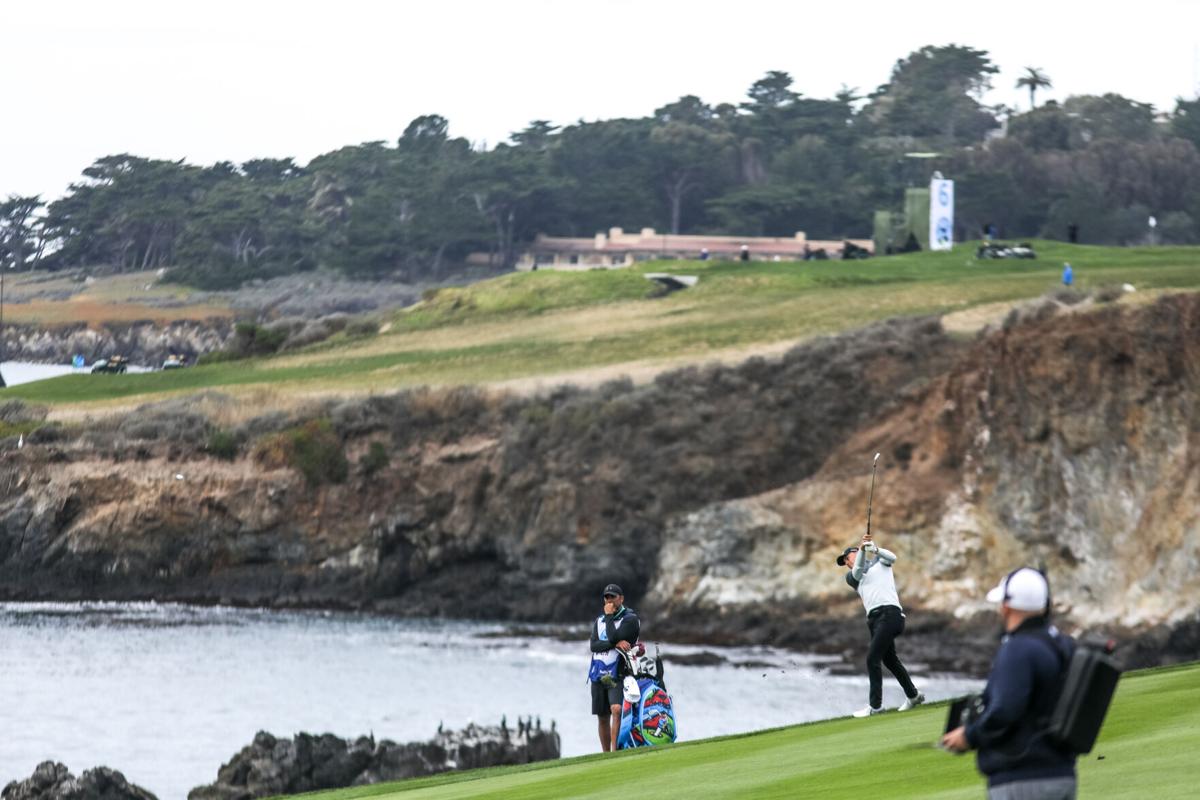 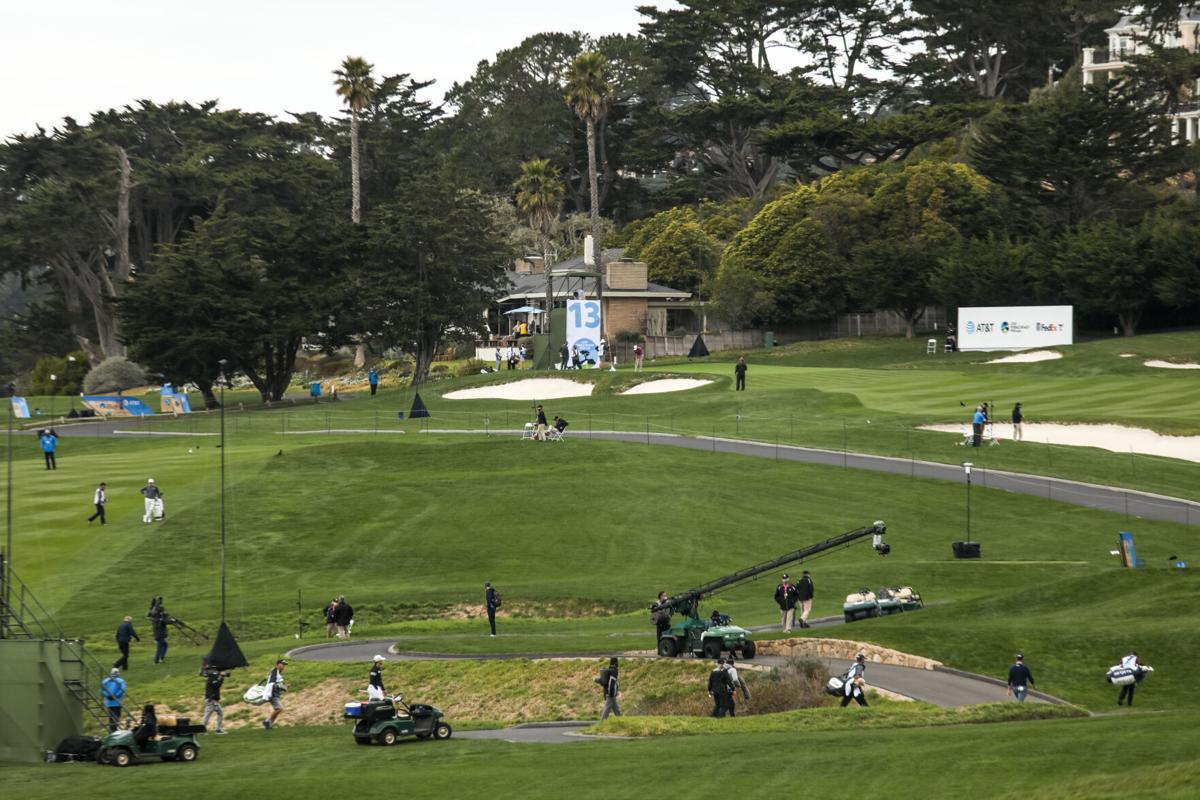 A view of the Pebble Beach Golf Links course during the AT&T Pebble Beach Pro-Am. The 2021 course is more challenging and designed specifically for pros, since the traditional amateur pairings were called off due to the pandemic. 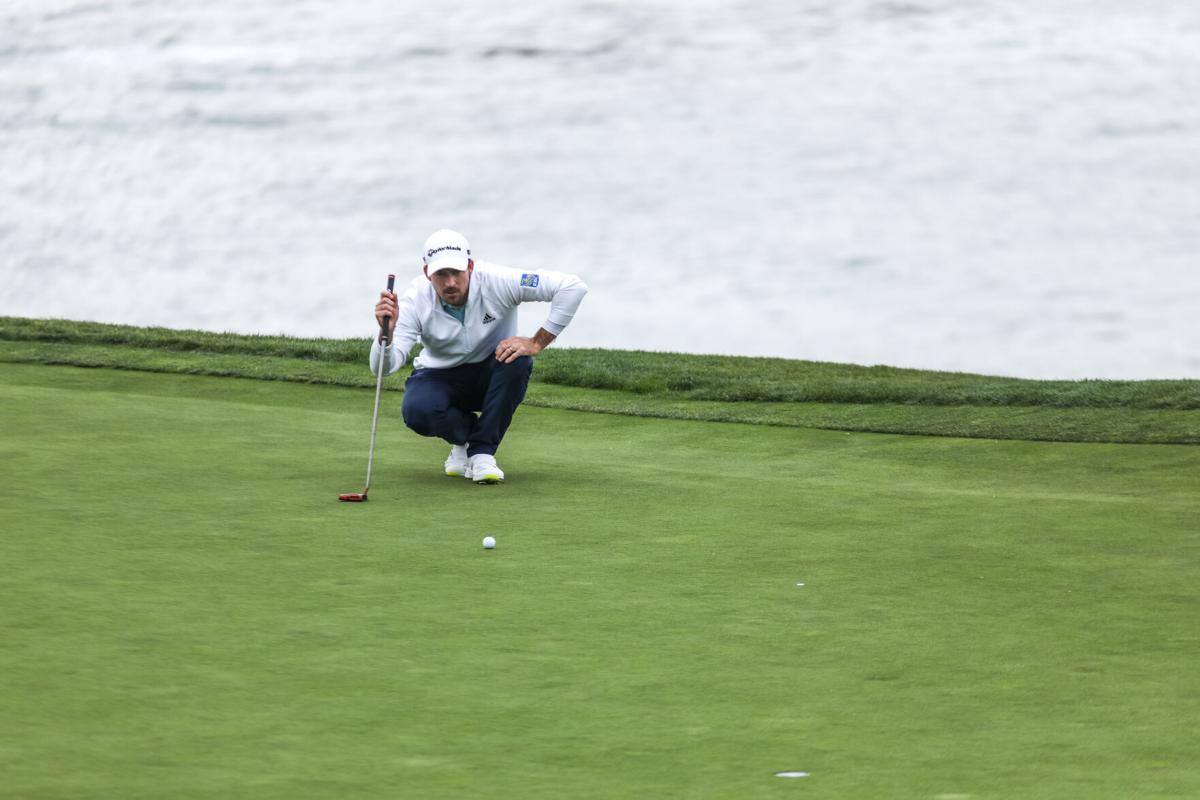 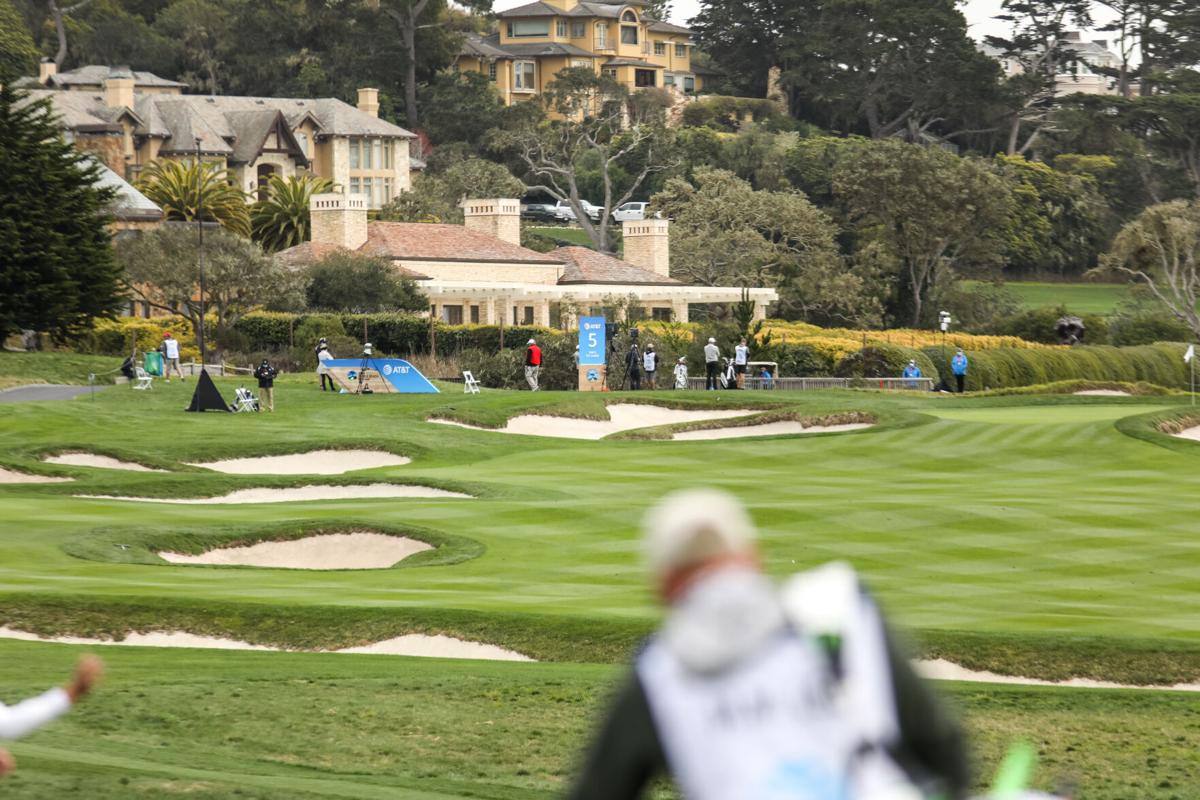 A view of the Pebble Beach Golf Links course during the 2021 AT&T Pro-Am, where the usual thousands of spectators were absent, due to Covid-19 restrictions. 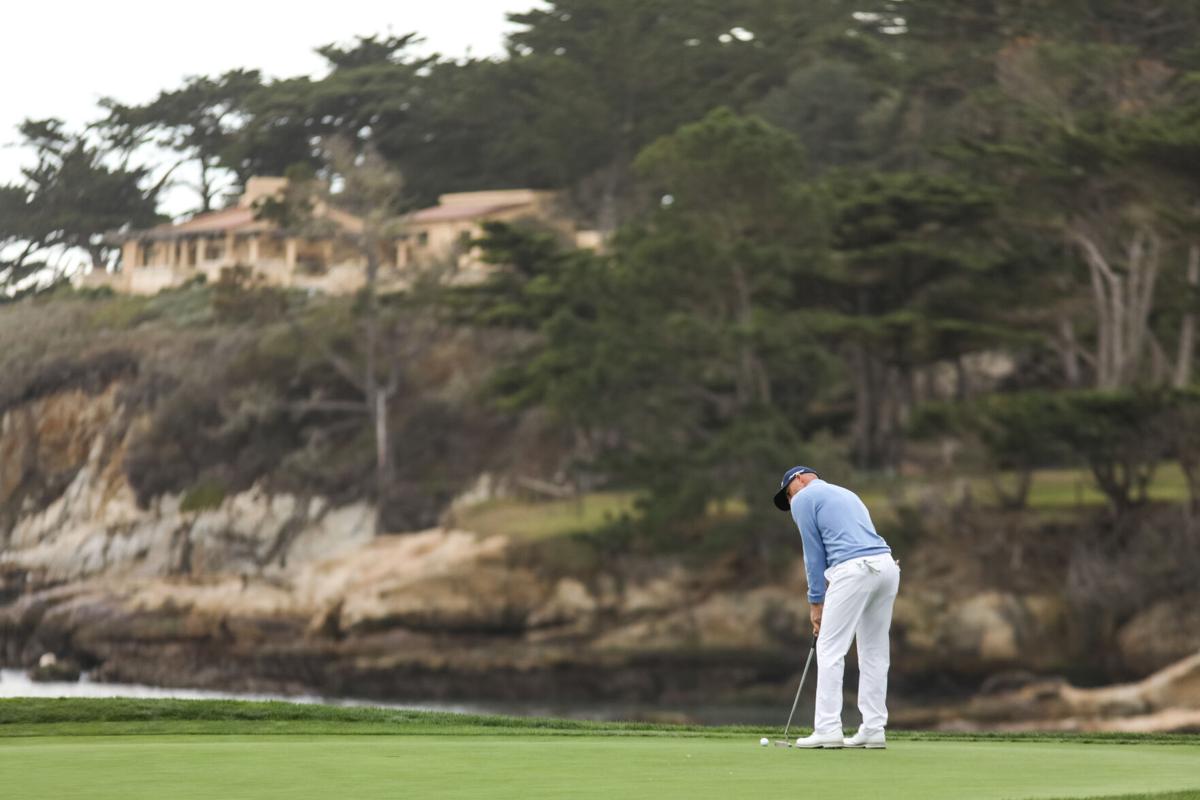 Jonathan Byrd prepares to swing his golf club during the AT&T Pebble Beach Pro-Am on Feb. 11. 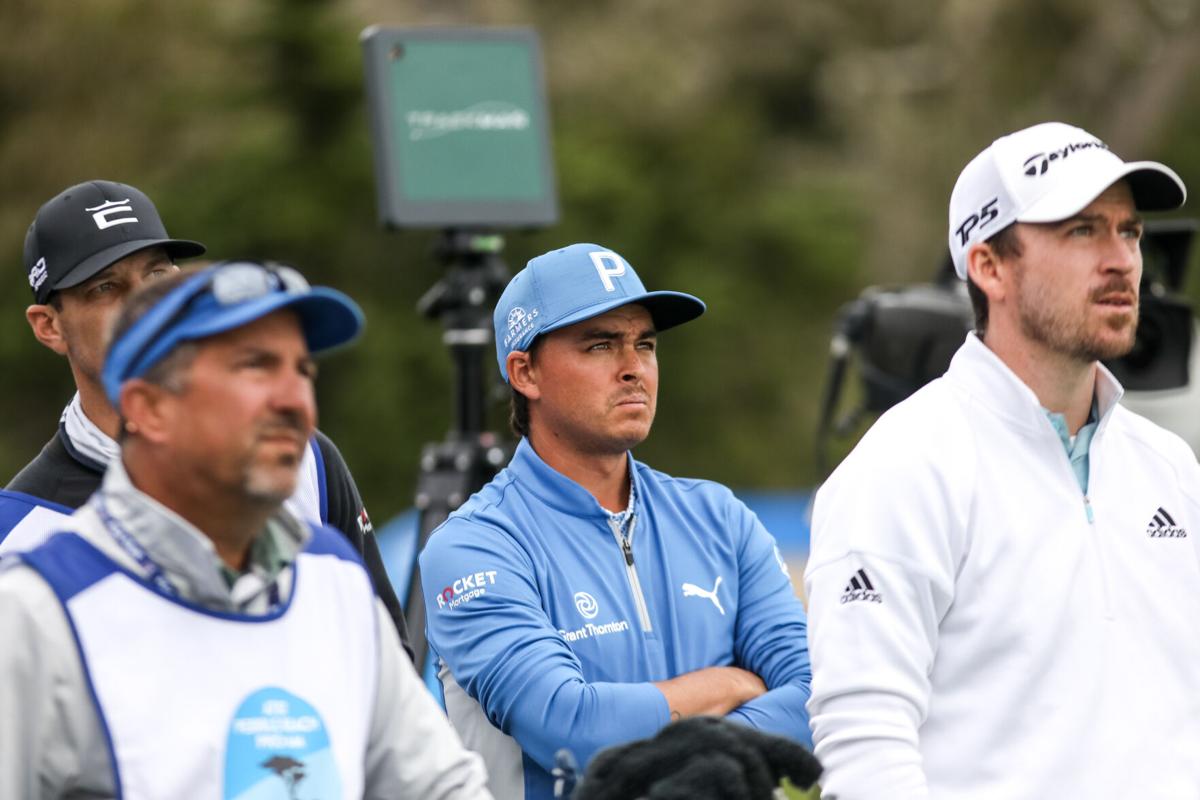 Rickie Fowler, second from right, watches Jordan Spieth’s golfball as it flies mid-air after being hit during the AT&T Pebble Beach Pro-Amon Feb. 11

A view of the Pebble Beach Golf Links course during the AT&T Pebble Beach Pro-Am. The 2021 course is more challenging and designed specifically for pros, since the traditional amateur pairings were called off due to the pandemic.

A view of the Pebble Beach Golf Links course during the 2021 AT&T Pro-Am, where the usual thousands of spectators were absent, due to Covid-19 restrictions.

Jonathan Byrd prepares to swing his golf club during the AT&T Pebble Beach Pro-Am on Feb. 11.

Rickie Fowler, second from right, watches Jordan Spieth’s golfball as it flies mid-air after being hit during the AT&T Pebble Beach Pro-Amon Feb. 11

The 2021 AT&T Pebble Beach Pro-Am began on Wednesday with clear skies and beautiful weather. The six chosen celebrity amateurs took to the course to play a five hole scramble tournament, “The AT&T Every Shot Counts Challenge,” for $1.6 million in prize money from challenges along the way.

One of those celebrities, Macklemore, rolled up to the first tee of the course on an electric scooter; he wore all green and carried his clubs on the back of the scooter. (That scooter is now up for auction.) Macklemore’s partner, actor Alfonso Ribiero (famous for playing Carlton on Fresh Prince of Bel Air) was the star of the day. Ribiero carried their team to a win and over $500,000 donated to a Monterey Peninsula charity of their choice. Ribiero also did his famous Carlton dance move on the final green after winning.

Legendary sports broadcaster Jim Nantz drove around behind the players in a golf cart, while Steve Young (along with everyone else) followed on foot. Young spent a considerable amount of time coaching Macklemore, whose skill paled in comparison to his partner, Ribiero.

Bill Murray and football player Larry Fitzgerald played a solid game despite coming in third. Actress Kathryn Newton and 2015 Miss America Kira Dixon came in second, putting on a clinic on several holes. Had it not been for Ribiero carrying Macklemore, Newton and Dixon would have stolen the day.

When the PGA Tour professionals took to the course on Thursday morning, the sun was peeking out and the winds were light. The greens on the Pebble Beach Golf Links were nice and fast.

Patrick Cantlay started out the tournament on fire, ending the day in first, 10 below par and tying the course record. “I think we got Pebble Beach in ideal conditions today,” Cantlay said during a press conference afterwards, “this course can be a bear when the winds come up.”

Jordan Spieth finished the day well, like most golfers who started on the Pebble Beach course. Spieth finished 7 under par on day one, and managed one of the shots of the day for his second eagle. “Pebble Beach requires a lot of precision,” Spieth said, “and you really have to trust what you are doing.”

Those who started on the Spyglass Hill Golf Course did not fare quite as well. The legendary Phil Mickelson, who was one of those unlucky golfers, finished the day 2 over par.

Day two unfolded with 14-20 mph winds, but otherwise beautiful conditions. The greens were still nice and fast, but with gray skies on the horizon it was clear that there is weather on the way. Jordan Spieth got off to another great start, as Cantlay struggled to keep his lead as both played the Spyglass Hill Golf Course today, Friday, Feb. 12. Spieth managed to capitalize on his momentum from the day before, nailing a 40-foot putt and moving up into the lead by the end of the day at -12 par.

“I’m in a great position at the midway point,” Spieth said. “I’m keeping the ball in front of me and I’m striking it really nicely.”

Daniel Berger finished second on the day at -11 par after having briefly taken the lead. “It’s hard to have a bad day at Pebble Beach,” Berger said. “It’s one of those courses where you just walk it and enjoy it.” Henrik Norlander finished in third on Friday, shooting a -10 par.

Changing courses today didn’t make a difference for Mickelson, who finished well behind the field to find himself eliminated on Friday. It also hurt a little bit to watch Mickelson hit two balls into the water on the 18th hole to finish his round. Mickelson finished +10 par.

John Daly, who is still playing at 54, found himself eliminated as well finishing +13 par. The cut today was at -1 par, meaning that if they scored any higher than that they are eliminated from weekend play.

With rain in the forecast for Saturday, things could get a little dicey for those who made the cut. But Sunday, the final day of the tournament, shows some signs of the sun returning.

Looking ahead to the weekend, this is when the course is set to look a little different. The tee boxes at the fourth and 17th holes will be moved back. The pins will be set differently as well, to make things a bit more challenging.

Issue February 25, 2021 - Shopping local is one thing. Can you keep your cash – and your investments – circulating in the community?