"The allegations that MILPA has been taken over by any organization are unsubstantiated and untrue," Gomez said. "As executive director, I would never allow that to happen, ever."

The fiscal sponsor for MILPA is the Action Council of Monterey County, which receives funds and then transfers them to a number of small organizations. (MILPA—which stands for Motivating Individual Leadership for Public Advancement—has been approved by the IRS to operate as a standalone nonprofit organization, but has not yet transitioned.)

Villa has come under scrutiny since last week, when the Salinas Police Department released a recording of a video call made by Tai Cruz, an inmate at Monterey County Jail, in which Villa is seen pointing to the “M” on his Miami Marlins hat, which represents the Salinas East Market faction of the Norteños. He then puts his hand over his mouth and then quickly draws a finger across his neck—a gesture, sources say, meant to silence Cruz from sharing the location of a murder victim's body.

As the Monterey County Weekly, Voices of Monterey Bay and KSBW have explored the efforts by Norteño members to gain positions of control in MILPA, a number of affiliated organizations have issued statements of strong support. (Those statements are included below—this story continues after the complete statements.) 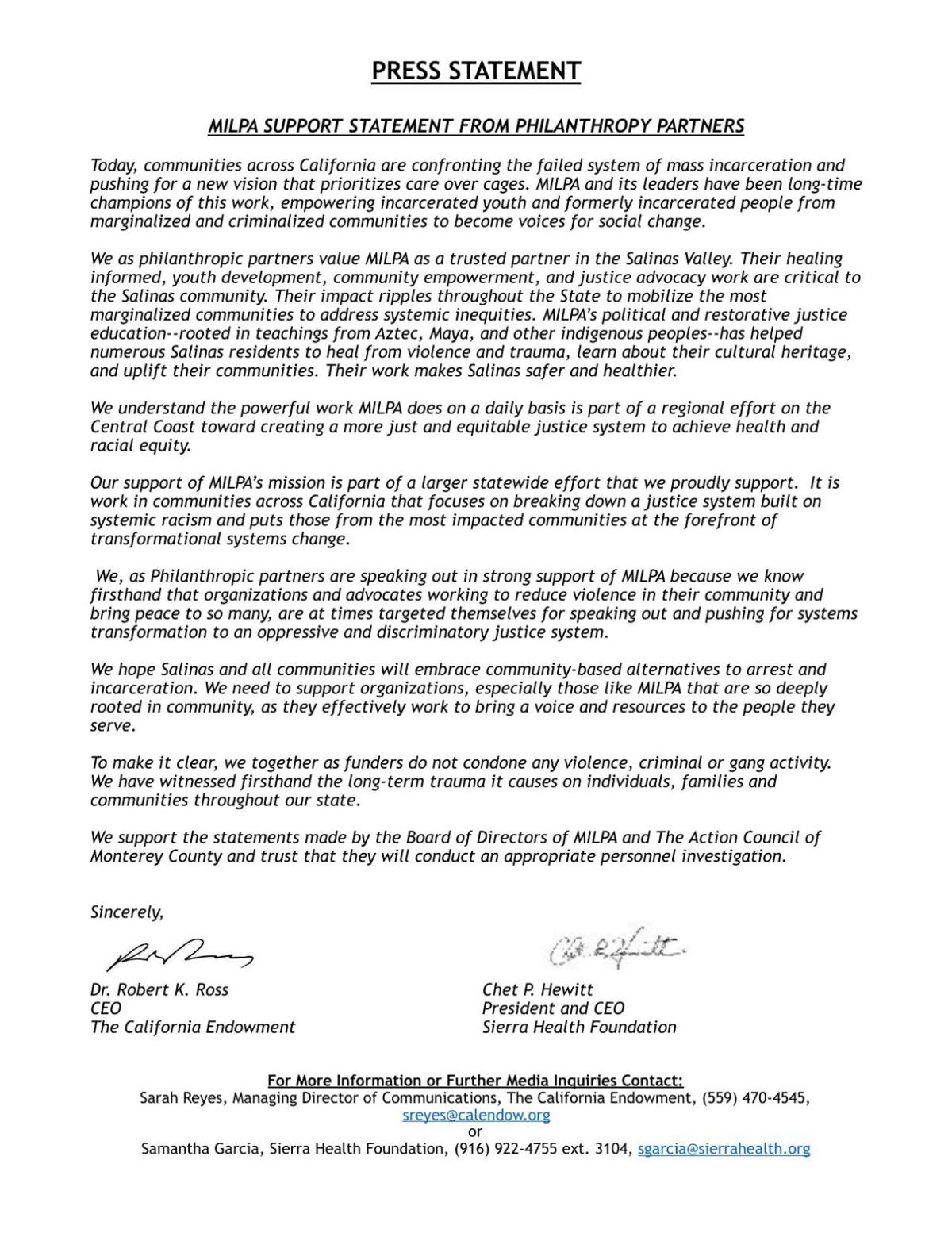 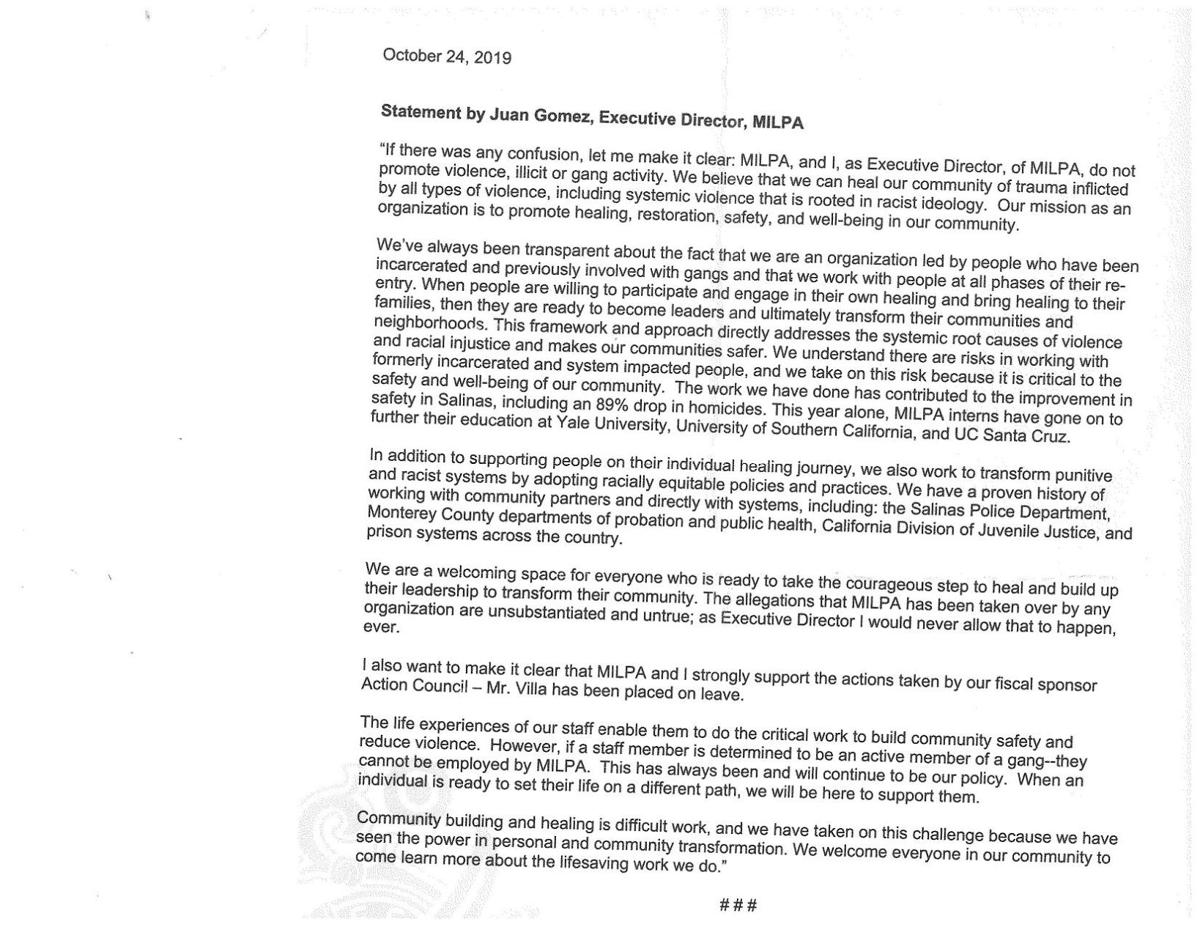 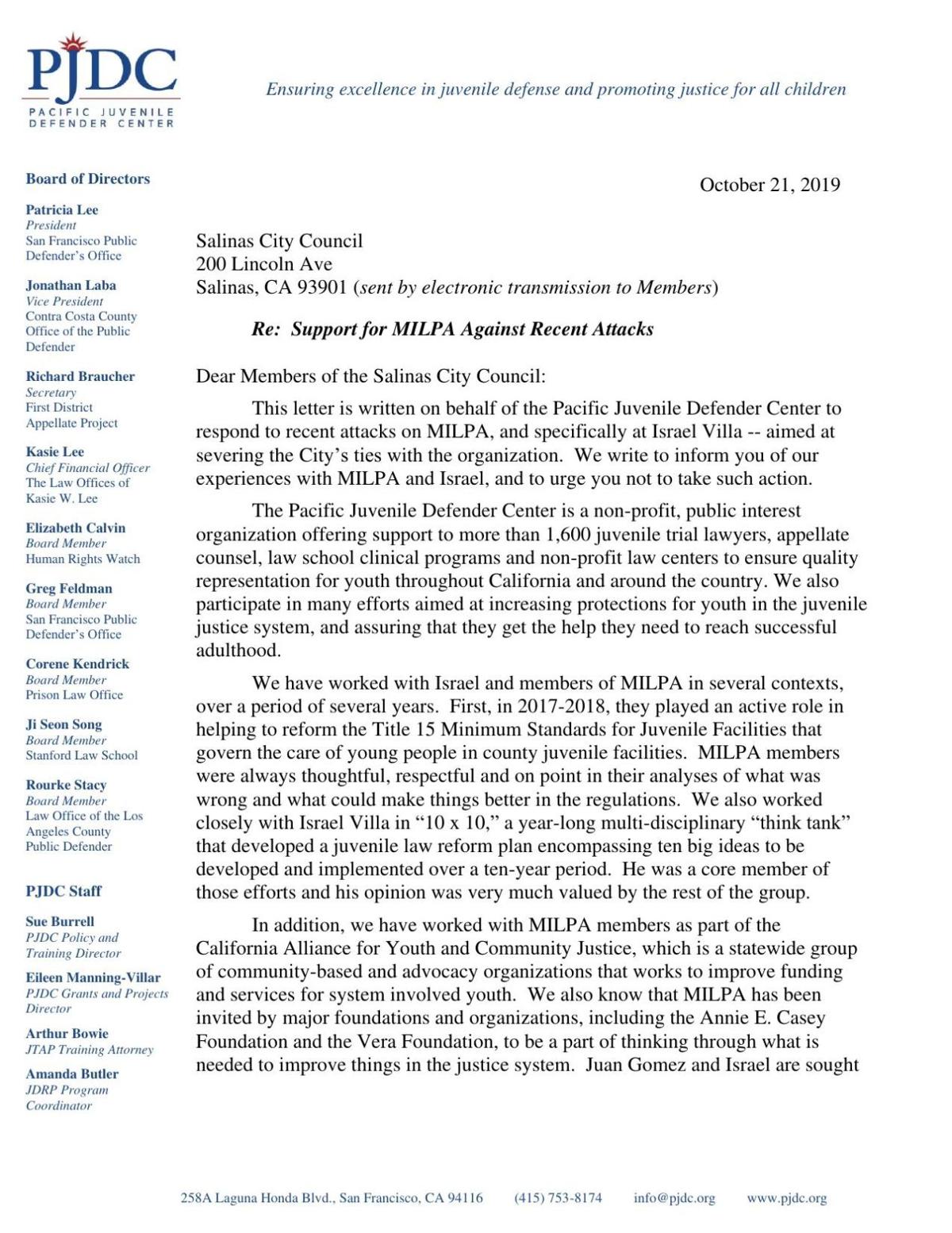 In his statement to media on Thursday, Gomez said, "We've always been transparent about the fact that we are an organization led by people who have been incarcerated and previously invovled with gangs and that we work with people at all phases of their re-entry."

Gomez did not take questions from members of the media.

The Action Council issued a statement on behalf of itself and Building Healthy Communities, an Action Council-sponsored organization that helped incubate MILPA and other projects.

"In the past week we have seen a video circulating that calls into question the reputation of one of our fiscally sponsored projects. Action Council and Building Healthy Communities (BHC) stand by the good work that MILPA has been doing for the youth of Salinas and Monterey County," according to the statement.
"Action Council and BHC do not condone gang activity, and take allegations that individuals associated with one of our fiscally sponsored projects may be engaging in such conduct very seriously. We are currently looking into this matter and cannot comment further at this time. Action Council continues to support the mission of MILPA and its important work. For the past eight years we  have witnessed MILPA’s numerous accomplishments in helping to end the school-to-prison pipeline, and in offering services that help people to heal from violence and trauma.
"Salinas and Monterey County needs a group like MILPA that can take a strong approach against the criminalization of youth and works to end the systemic racism that continues to push youth of color into the incarceration system.

In an Oct. 21 letter to members of Salinas City Council, Sue Burrell, policy and training director at the Pacific Juvenile Defender Center, wrote:

"It is not surprising that tensions arise when a relatively young organization challenges longstanding practices—that is to be expected. But to us, the proper response is not to dredge up character attacks designed to discredit the work of the organization. In terms of MILPA specifically, they are exactly the kind of group law enforcement should want to build relationships with."

In a statement released last week, the Salinas Police Officers Association issued a statement calling upon the city of Salinas to officially sever ties with MILPA, in light of the video showing Villa throwing gang signs, as well as former MILPA community liaison Louis Gutierrez being sentenced to two years in prison for stopping bystanders from intervening in a physical fight.

"Salinas has worked hard to break away from the violent gang culture that has held too many neighborhoods, too many families and too many young people hostage over the last few decades," SPOA President Jim Knowlton said in the statement. "The fact that MILPA leaders have repeatedly and openly promoted these gangs is shameful. Worse, MILPA has refused to speak out against such behavior or apologize for the damage its employees and leaders have inflicted upon our community.

"We are calling on the Mayor, and every member of the City Council to publicly condemn these actions and to formally sever all ties, both formal and informal, with an organization that will not take responsibility for the harm it promotes in our community. We are also asking MILPA funders and strategic partners to do the same.”

While several members of council have spoken out with concern, partners and funders—including The California Endowment, the Action Council of Monterey County and Building Healthy Communities—have issued statements of support.