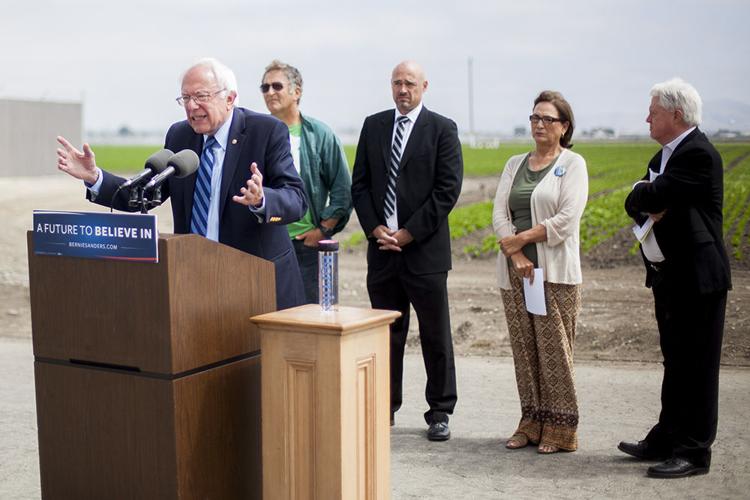 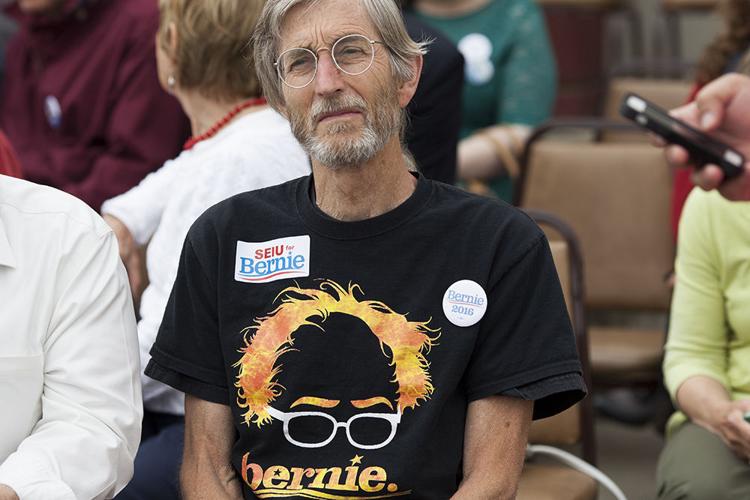 A Sanders supporter listen to his speech outside the Veteran's Memorial Hall. 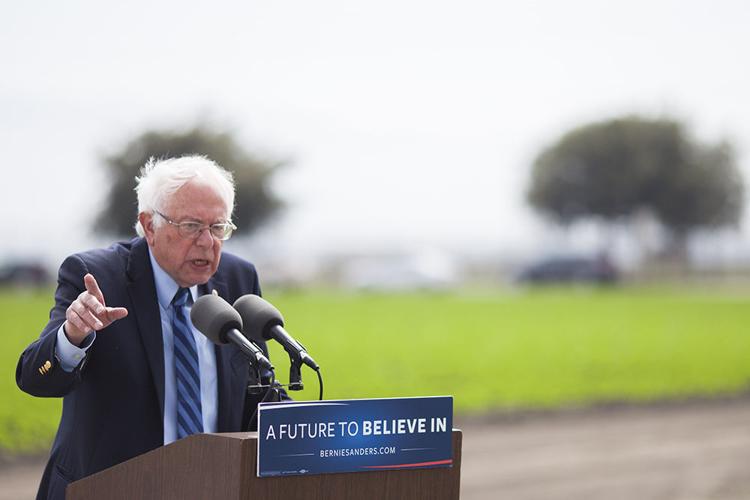 Sanders answers questions from the national press about his campaign.

A Sanders supporter listen to his speech outside the Veteran's Memorial Hall.

Sanders answers questions from the national press about his campaign.

With a field of romaine lettuce just steps behind him, presidential hopeful Bernie Sanders swooped into Spreckels this morning to give a press conference about his views on fracking, and to voice his support for Protect Monterey County, the group of local activists who are seeking to ban fracking within county lines.

The free, invite-only event was attended by about 50 anti-fracking activists as well as local and national press.

When Bernie arrived, just after 10am, he wasted no time in stepping in front of the podium.

A group of four speakers stood behind Sanders, and he introduced each of them before they made a brief speech, and before Sanders would conclude the event with a speech of his own.

First up was David Braun, co-founder of Americans Against Fracking, who lauded New York for banning fracking in the state last year, which came in part of based on the recommendation of Howard Zucker, the state's health commissioner, who said he would not let his child play outside near a fracking operation.

"We need real leadership, this is our health," Braun said. "We can no longer afford to have the public policy of our energy purchased by corporate interests."

Andrew Hsia-Coron, co-founder of San Benito Rising, the group which successfully brought an initiative to ban fracking in San Benito County in 2014, and who's also co-founder of Protect Monterey County, came next.

"Right here in Monterey County, every single day, 100,000 barrels of contaminated wastewater are being pumped back into protected aquifers in violation of the Safe Drinking Water Act," Hsia-Coron said.

Margaret Rebecchi, Latino outreach coordinator for Protect Monterey County, followed Hsia-Coron, and focused on the effect fracking has had on the state's Latino and low-income communities.

"The fracking industry is pushing hard into our communities, and the effects are devastating," she said.

Rebecchi spoke of visiting Kern County, a fracking hot-spot in the state, and its effects on the local population.

"I visited majority-Latino schools near oil fields where the fracking and other extreme extraction have taken place. The students suffer from nosebleeds, asthma, headaches and unusual forms of cancer.

"Over 90 percent of California's toxic fracking wells are in Latino and low-income communities," she added, her voice rising. "I don’t know what else to call that but environmental racism!"

The last speaker before Sanders was Gary Patton, an attorney and former Santa Cruz County Supervisor who crafted an ordinance to ban fracking in that county, one that was adopted unanimously by the county's supervisors in May 2014, making it the first county in the state to do so.

"There is a growing movement against fracking that is beginning to spread all across our country," Sanders said.

"I hope very much that Monterey County will continue the momentum that makes it clear that fracking is not safe, not what we need for our kids," Sanders said.

"And most importantly, let me make it as clear as I can be, that if elected president, we will not need state by state, county by county action, because we are going to ban fracking in 50 states of this country."

Shouts of "Yes!" rang out from the crowd.

"Fracking is a danger to our water supply, our most precious resource," he said, adding that it made no sense to him that, amid a five-year drought, California residents are being asked on the one hand to conserve, but that gas companies are given a "green light" to use thousands of gallons per day for fracking.

Sanders then went on to express concern about fracking's impact on human health, and its propensity to cause earthquakes, even months and years after the fracking has occurred.

He also drew the line between his views on fracking compared to Hillary Clinton, the other Democratic presidential hopeful, who has said in the past she thinks fracking should be regulated.

"I think it is too late for regulating," he said.

Sanders saved his biggest concern for last—climate change, which he said "is already doing devastating harm, in our country, in California and all over this planet.

"If we do not get our act together in the very short term, and transform our energy system away from fossil fuel, to energy efficiency and sustainable energy, the bad situation, the dangerous situation we are seeing today will only become much, much worse.

"Our goal going forward is not more fracking, not more dependency on fossil fuel, it is to transform our energy system to sustainable energy and energy efficiency."

After a lengthy discussion by the Monterey County Board of Supervisors this afternoon, the board voted 4-1 (Phillips) to send an initiative to the ballot this November that would ban fracking, wastewater injection and all new oil development in the county.

The vote came after almost two hours of public comment, much of it from members of Protect Monterey County, the local anti-fracking group that brought the initiative by collecting over 16,000 signatures, more than double the 7,391 required to get a measure on the ballot.

PMC submitted the signatures to the county elections department in early May, and today the initiative came before the supervisors.

The board chose the latter, after several Protect Monterey County members expressed concern that the only qualified bidder for the fiscal impact report—in that the firm was able to complete the report in 30 days or less—was Applied Development Economics, a firm that in 2014 produced a similar report in San Benito County on behalf of the San Benito County Farm Bureau, which opposed the fracking ban that the voters ultimately approved.

The PMC members that spoke, most of whom—if not all—attended the Bernie Sanders anti-fracking event in Spreckels this morning, questioned the impartiality of the firm. PMC co-founder Andrew Hsia-Coron was among those who were highly suspicious, and he told the supervisors, "I can't prove it, but where there's smoke, there's often fire."

While Donald Trump has largely stolen the national stage in the 2016 presidential election, there are dozens of races closer to home that will…