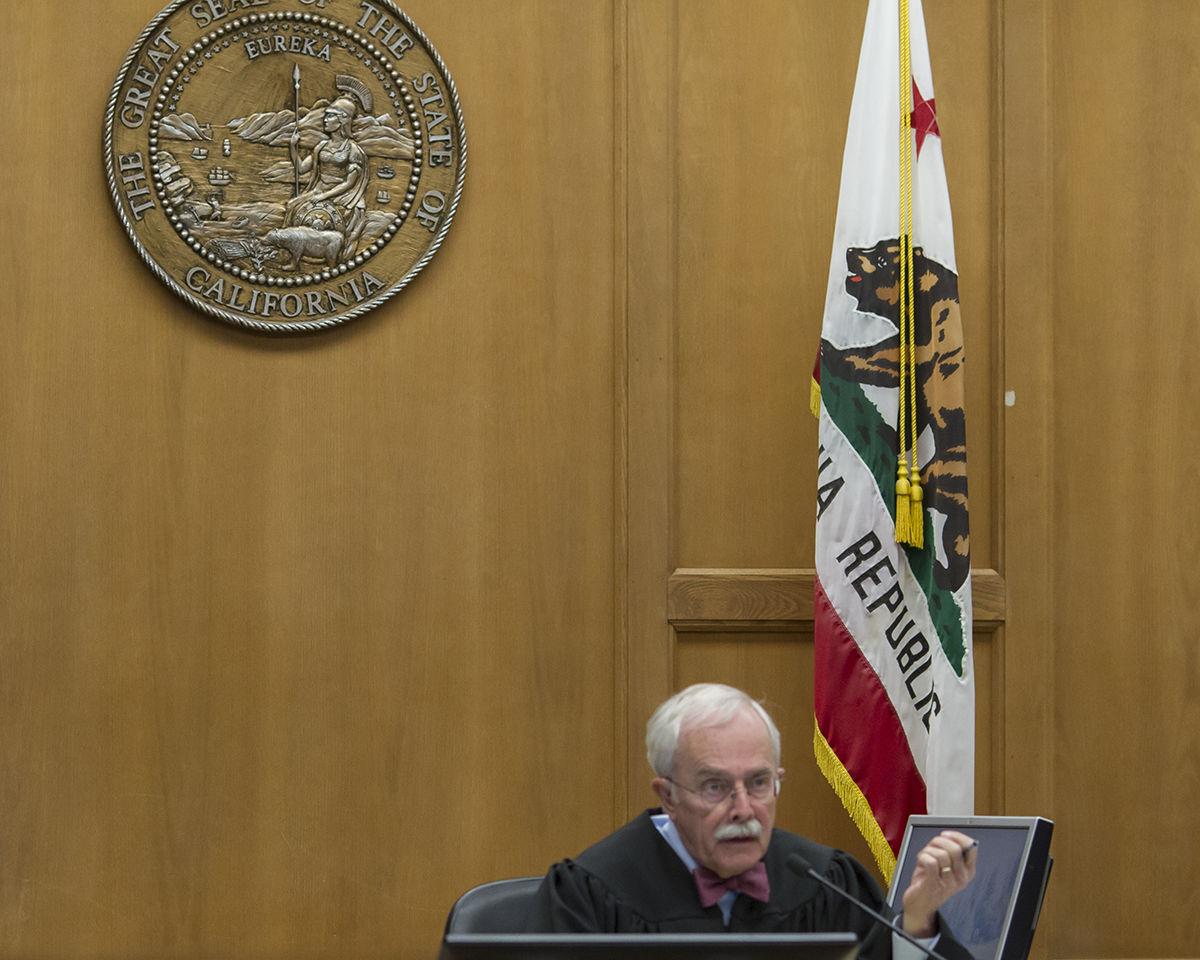 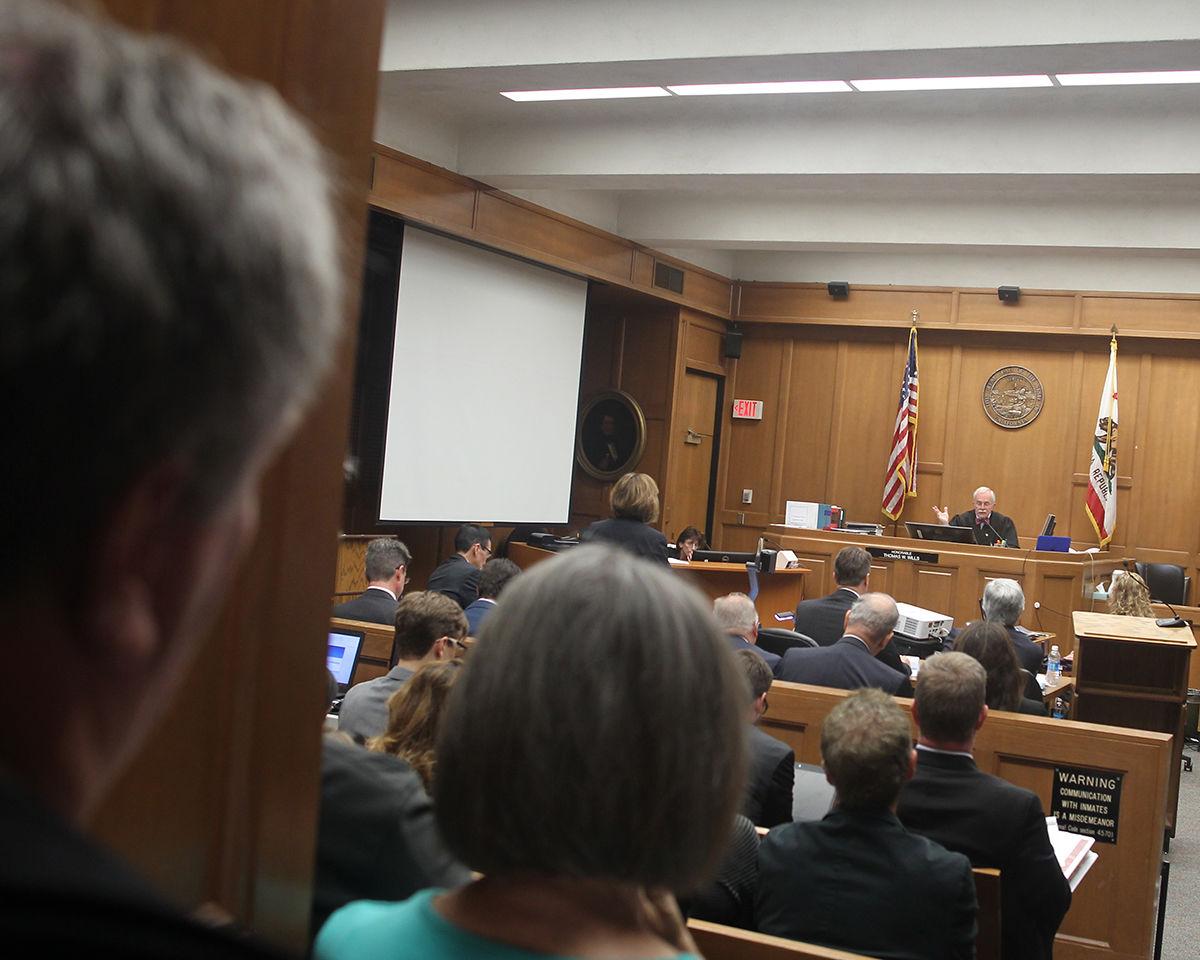 A packed room of attorneys and members of the public during the first day of the trial. 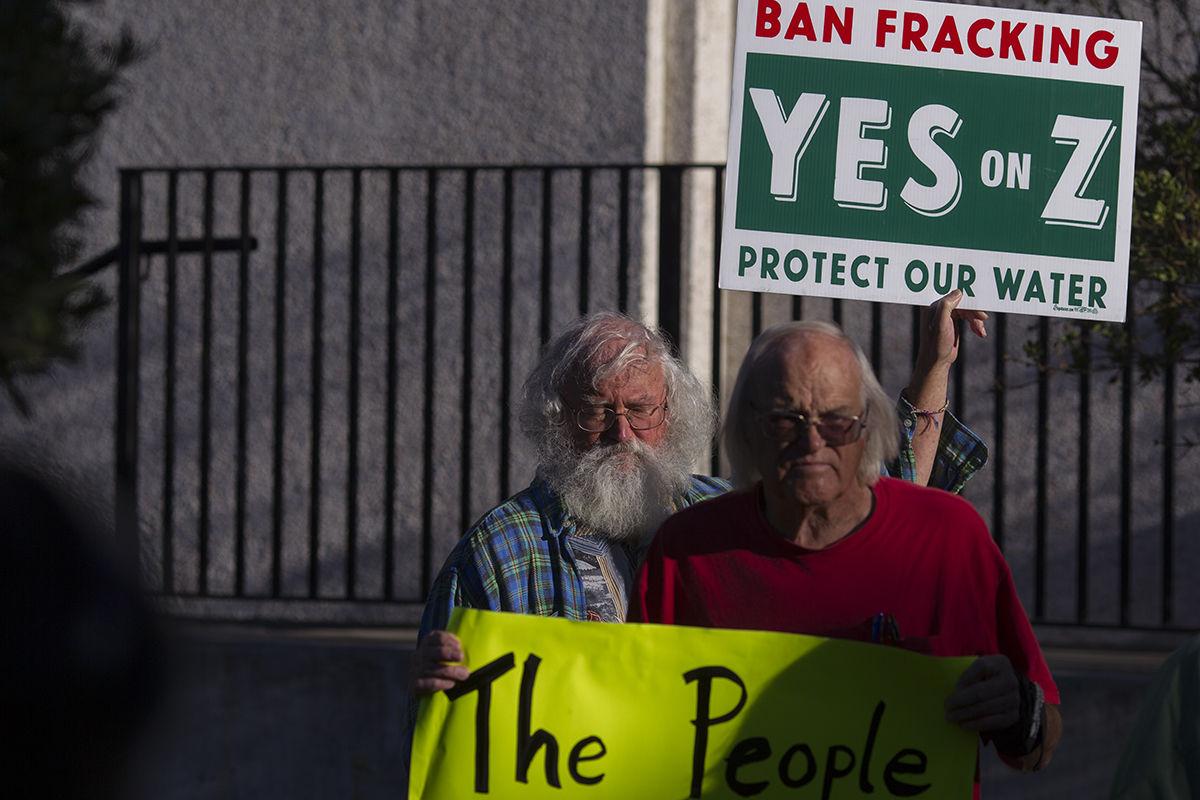 Anti-fracking protestors hold signs outside of Monterey County Superior Court during the first day of trial on Nov. 13, 2017.

The measure, a ballot initiative Monterey County voters approved in the November 2016 election, would have banned fracking, wastewater injection and new oil wells in the county effective Dec. 16, 2016.

But before it took effect, Chevron, Aera Energy LLC (the two biggest oil operators in the county) and other parties sued the county Dec. 14, 2016. They aimed to stop implementation, arguing Measure Z was preempted by state and federal law and amounted to an unconstitutional taking of property value.

The litigation was widely anticipated—the dollar value of oil reserves in South County is estimated to be in the hundreds of millions of dollars—and the trial over whether some or part of the measure would stand was held in Monterey County Superior Court in November.

Judge Thomas Wills presided over the four-day trial, which concluded Nov. 16, and issued a 53-page intended ruling on Dec. 28.

But Wills decisively struck down the measure's bans on wastewater injection and new wells, agreeing with oil operators that state and federal law preempts county law with respect to oil and gas activities.

That means, unless an appellate ruling overturns the decision, current oil operations in Monterey County can continue unabated.

The oil operators in the San Ardo oil field use the practice of wastewater injection because they pump oily water out of ancient aquifers that are comprised of approximately 95-percent water and 5-percent oil.

After the oil is separated from the water on the surface, some of the water is injected back into an even deeper ancient underground formation to be disposed of, while some is heated to become steam and is injected into the oil-producing formations to loosen up the deposits—which are otherwise viscous, and like sludge—so that they can be pumped to the surface.

(Chevron also cleans some of the water and lets it seep into the local groundwater through a percolation pond; it is currently the only operator that does so.)

Wills' intended ruling states that how this practice is conducted is outside the purview of county regulation.

"California's state oil and gas legal and regulatory scheme fully occupies the area of the manner of oil and gas production," Wills writes of the wastewater injection ban, adding that the measure's restriction on "particular production techniques" is "'in conflict with general law,' and is therefore preempted."

Wills also writes that under the federal Safe Drinking Water Act, prior case law states that Congress intended for states to retain authority regarding underground injection "'so long as it does not impinge'" on the underground injection program administered by the state Environmental Protection Agency.

"There is a significant difference between stringent regulation and outright proscription," Wills writes.

As to the question of whether or not the county can ban new wells, Wills writes that is also preempted by state and federal law for similar reasons, as the oil operators successfully demonstrated to the court that the ban would also prohibit new wastewater injection wells, which are necessary to the operation, and would therefore effectively ban wastewater injection, which Wills ruled is under the jurisdiction of state and federal regulatory schemes.

Wills' ruling allows Measure Z's fracking ban to stand, despite arguments from attorneys for the oil operators and mineral rights owners that if one part of the measure was preempted, the whole measure was null.

In short, he concludes the fracking ban is "grammatically separable from the remainder of Measure Z. It is entirely contained in its own section of the initiative."

He also writes, quoting case law, that "given the campaign’s focus on the fracking ban, the court believes the electorate would prefer 'to achieve at least some substantial portion of their purpose' rather than see the whole initiative invalidated."

Wills does not rule on whether or not Measure Z would amount to an unconstitutional taking of property value because he determined the restrictions that would have forced that question are invalid, as they are preempted.

But he did weigh in on the measure's process that would allow for mineral rights owners, and oil and gas operators, to petition the County Board of Supervisors on a case-by-case basis for exemptions, which proponents argued was a legal protection for the measure, and gave oil beneficiaries a chance to keep their property value.

He found the measure's exemption process, which "would require potentially hundreds" of applicants, would create a situation of bureaucratic chaos in which petitioners could not get "reasonably prompt" action from the board.

In response to Wills' intended decision, Monterey County Counsel Charles McKee sees both a victory, and a defeat.

While two aspects of the three-pronged measure were shot down, he says, "The positive takeaway for the county, and the voters, is that what the court essentially upheld at this time is the ban on fracking, which was important to the voters of Measure Z.

"One other important point is the county has no liability for any takings damages."

McKee says he hasn't yet calculated the legal fees the county incurred in defending the measure, though he says they're less than $1 million, and cannot yet say whether or not the county will appeal the decision, once it becomes final after all the parties have signed it.

Whether or not the county appeals, McKee says, is a decision the Board of Supervisors will make sometime in January, in closed session.

Protect Monterey County and their attorneys (most of whom are working pro bono) have already decided to appeal the ruling.

Kassie Siegel, senior counsel with the Center for Biological Diversity (who advised Protect Monterey County during the drafting of the initiative) says she is disappointed that the will of the people was not upheld, but is optimistic about the appeal.

"Even if it’s a long battle, we think we will win these long overdue protections for Monterey County in the end," Siegel says. "We appreciate all of the time that the court put into the trial and decision, and we respectfully disagree with the outcome. California law gives local government really broad authority to protect their residents, and we think at the end of the day, Measure Z will be upheld in full."

Laura Solorio, a co-founder of Protect Monterey County—whose members met for months in deciding which types of operations to include in the measure's bans—echoes Siegel's dismay.

"We have already overcome so many obstacles to fight to pass Measure Z that we won’t give up," she says, adding that over 73,000 voters supported it.

There is not likely to be an appeal on the fracking ban, which Wills upheld, at least for the time being. That's because Wills determined that industry groups do not have standing on the matter since they're not currently engaged in fracking—and therefore would not have standing to appeal.

But that means the timeline on an appeal for that portion of the ruling could stretch far into the future, well beyond the normal 90-day window after a ruling is signed and finalized. If someone applies to frack in the county, say in 2037, 20 years from now, and chooses to appeal the ruling, that 90-day countdown would begin when that application is submitted.

Issue January 13, 2022 - The writer, performer and woman-about-town is back on tour, with a show in Carmel.