Carmel City Council's meeting on Feb. 6 already had all the elements of political theater.

Act I was the ongoing drama that is the sexual harassment investigation involving Mayor Steve Dallas.

Act II opened on the council considering a recommendation by the Community Planning and Building Department to deny an encroachment permit for a restaurant trash enclosure inside the city-owned Piccadilly Park on Dolores Avenue.

Sounds pretty dry, but hold on as the drama unfolds.

The enclosure in question wasn't just any trash enclosure. This was a 12-year-old enclosure belonging to restauranteur David Fink for one of his eateries, Cantinetta Luca.

It's tied to explosive claims by Fink that Dallas has it out for him politically, a claim Dallas denies. But Fink's claim, which includes fellow restaurateur Rich Pepe as an alleged witness, links it to the Dallas investigation, which covers not just claims of sexual harassment, but other ways in which Dallas has allegedly abused power.

Last year, Fink requested approval of plans for a 1,570-square-foot condo to be built on top of Cantinetta Luca, located next to Piccadilly Park.

The Carmel Planning Commission approved the project on Nov. 8, giving Fink the go-ahead to build.

Both Dallas and Councilmember Carolyn Hardy filed appeals of that project in late November, asking that the matter come to City Council for review.

In Dallas' appeal, he objected to various design elements of the condo, like the size of the windows and glass doors.

Fink (through his attorney Jason Retterer) objected to the appeals, suggesting that Fink could not get a fair hearing.

The matter was set for a Jan. 9 council meeting, but that night Dallas announced the appeal was being withdrawn.

End of story? Not even close. It's just getting started.

Part of the Planning Commission's November approval of the condo included a condition that Fink get a retroactive encroachment permit for the trash enclosure he built in 2006 as part of a remodel of the restaurant that year.

Planning officials told Fink last fall that although the department had approved the drawings for the restaurant remodel 12 years ago, he should have applied for an encroachment permit back then, since the enclosure takes up public park space. (Fink said the 2017 discussion was the first he heard about it.)

The encroachment permit was set for the Feb. 6 City Council agenda, where sparks began to fly.

"Mayor Dallas in request for review of Mr. Fink's condo project…identifies the trash enclosure as a component of the project that he could not support," Retterer wrote in a Feb. 2 letter on Fink's behalf.

"In addition and of great concern are Mayor Dallas' comments to another business owner in Carmel that Mr. Fink would never get another project approved in this town," he states.

The remark supposedly was made after Dallas withdrew his appeal of the condo—reportedly on advice from the city attorney—letting the Planning Commission's approval stand. 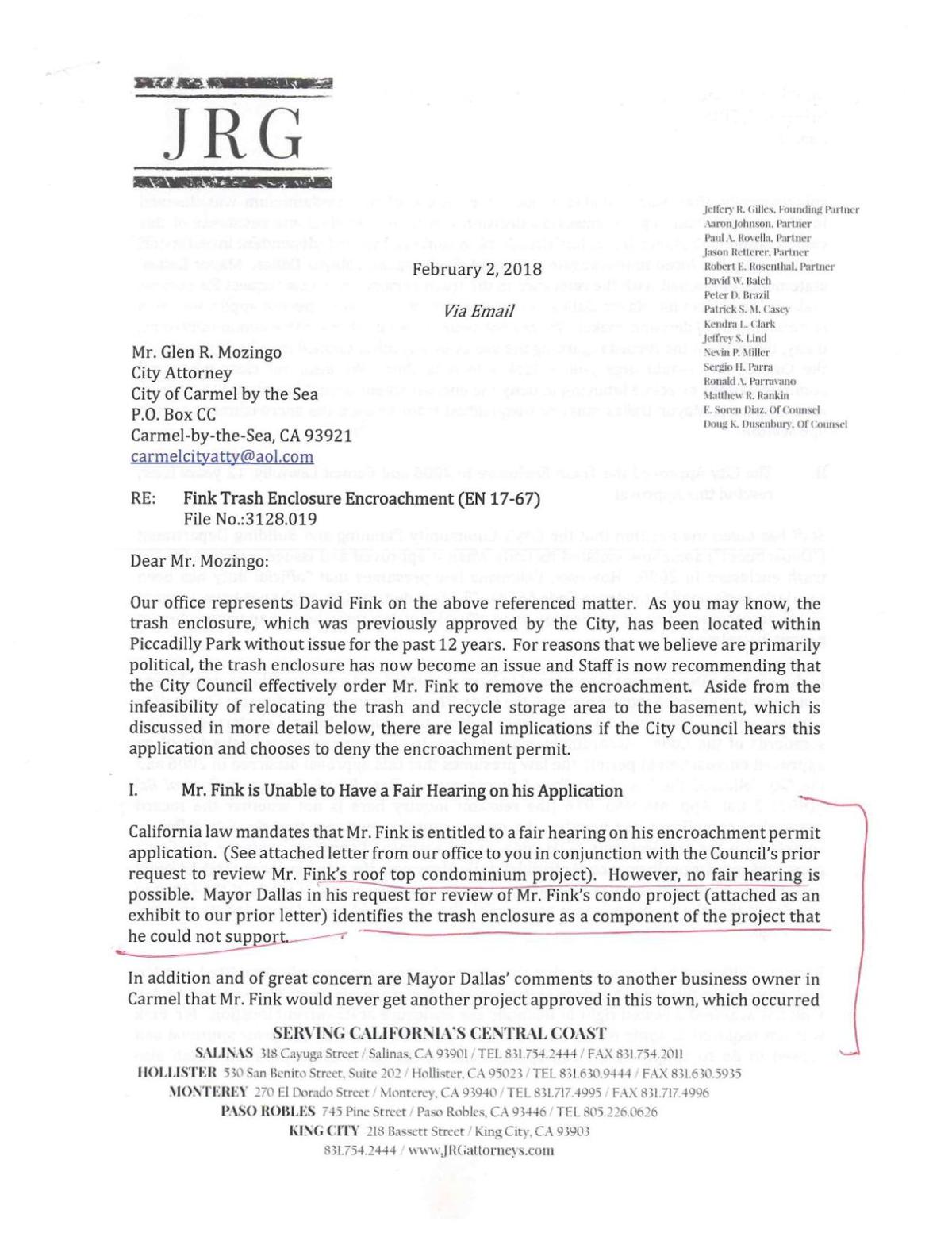 "The date and substance of this conversation with Mayor Dallas has already been conveyed to the independent investigator, who the city has hired to investigate a variety of claims about Mayor Dallas," Retterer wrote.

Dallas denies that claim: "I never told anyone including Mr. Fink that 'he would never get another project approved in Carmel.' Mr. Fink is angry that the city of Carmel by the Sea by a vote of 3 to 1 precluded Mr. Fink from continuing to occupy public property without an encroachment permit," Dallas writes by email.

City Attorney Glen Mozingo was asked by the council during the council meeting if there were any merits to Retterer's letter. He said no, noting that he disagreed with every point Fink's lawyer made.

Hardy disagreed that Fink was not getting a fair hearing. They were debating code, not personalities or specific people, she told him.

Councilmember Jan Reimers recused herself from the discussion because she owns property near the restaurant, leaving Dallas, Hardy, and councilmembers Tem Carrie Theis and Bobby Richards to deliberate.

Theis and Hardy worried that they would be setting a precedent if they gave Cantinetta Luca city-owned park space. What if every restaurant in town came knocking asking for the same consideration?

Richards disagreed there was a precedent: "It's not the same as someone who has never asked for approval before," he said, noting the plans had been approved 12 years earlier.

Mozingo said there was an error made by a past employee, and the city should not be obligated to uphold that earlier mistake.

Hardy suggested Fink could store his trash in one of two bathrooms inside the restaurant.

"It's not up to us to design it…it's not our problem," she said.

"I'm sorry, this is our problem," replied Richards. "If we deny this, we have denied a member of our community the ability to operate his business a little more efficiently. We need to work together to try and solve these problems."

Hardy made a motion to deny the permit.

After a few moments, Dallas offered to second the motion, "for the sake of discussion," he said.

He and Hardy talked about giving Fink 60 days to figure out what to do with his trash.

Dallas called for a vote, and City Clerk Tom Graves read the councilmembers' names one by one.

It was Theis' turn. She was now the swing vote in the group of four; if she voted with Richards, the motion would fail, and Fink would have his permit. A "yes" vote would mean no permit.

Dallas was the third and final "yes" vote; no permit for Fink.

Act III played out the next day. By phone, Fink says he's angry and ready to fight back.

He says he thought Dallas and Hardy would recuse themselves on the basis of their prior appeals, or that Mozingo would suggest it.

Fink contends there's no place to put the restaurant's trash without the enclosure. As to Hardy's suggestion that he use one of the two bathrooms, he's incredulous:

"Has she ever been in a restaurant that seats 100 with one bathroom?"

Storing the trash in the basement is not an option, because there's no way to pull heavy containers up the stairs, he says.

Fink is exploring all options, including legal action.

He believes that denying the permit they were "trying to teach me a lesson."

Expect the curtain to raise on more political theater that is Carmel.