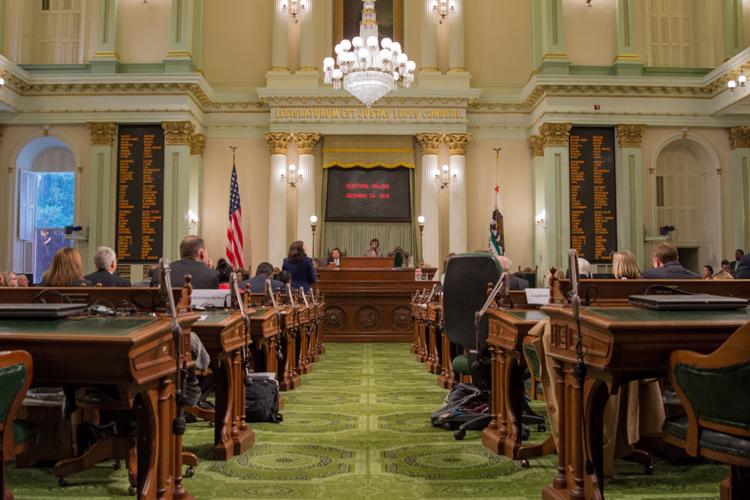 Electors gathered in the California State Assembly Chamber on Dec. 19 to cast 55 votes for Hillary Clinton. 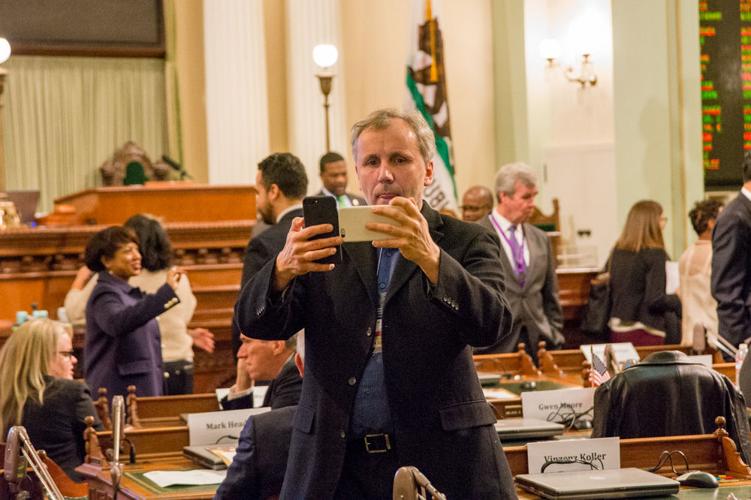 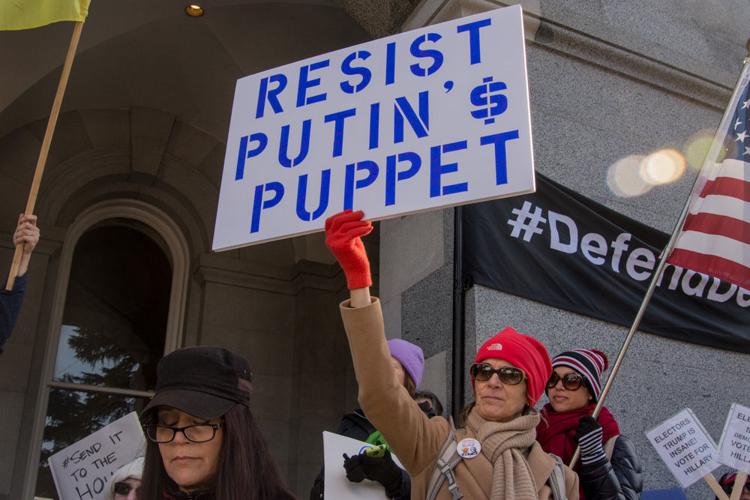 Hundreds of protesters gathered in front of the Capitol building in Sacremento before the Electoral College vote. 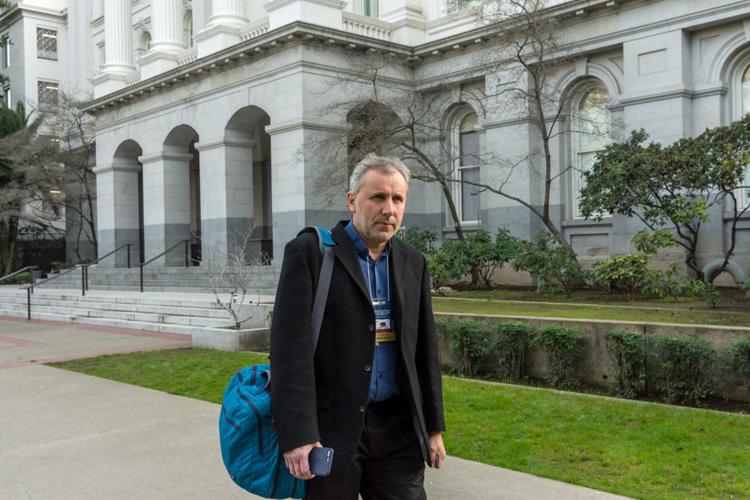 Vinz Koller outside the Capitol building in Sacramento after casting his ultimately losing vote for Hillary Clinton on Dec. 19. 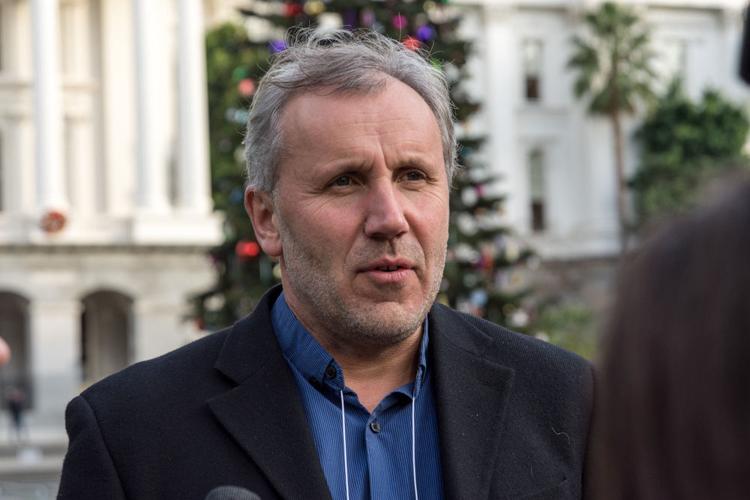 Vinz Koller speaks with the press outside the Capitol building in Sacramento.

Sitting in a cafe a block from the Capitol building in Sacramento just after 11am on Dec. 19, Vinz Koller anxiously monitors Electoral College votes on the East Coast. He’s contemplating committing a crime in a few hours, by voting against the will of the people in the state of California with his vote in the Electoral College.

The staunch partisan and outgoing chair of the Monterey County Democratic Party supported Hillary Clinton’s campaign. But, in a last-ditch effort to block the presumptive President-elect Donald Trump from ascending to the White House, Koller has fashioned himself as a “Hamilton Elector.”

The goal, spurred by Texas Republican and elector Christopher Suprun, is to get 37 electors for Trump in red states to cast their ballot for someone else, thereby blocking the 270 electoral votes needed to get the presidency. If that were to happen, the president would be decided on Jan. 6 by the U.S. House of Representatives, which would choose from the top three Electoral College vote getters.

“The Electoral College was created precisely to block someone like Trump from being elected president,” says Koller, who sued Governor Jerry Brown and other top officials in the state of California on Dec. 9 over the state law that requires electors to vote in line with the popular vote. Similar suits were filed by electors in Colorado and Washington.

While U.S. District Court Judge Edward Davila denied Koller’s motion for an injunction against the state law, his case got the attention of Trump’s lawyers, who became a party in the case.

“Trump’s lawyers were arguing against my right to vote for him,” Koller says with a laugh.

His efforts have also caught the eyes of the international press, with reporters from Finland, Nigeria and his home country of Switzerland requesting interviews.

Just a few days before, Koller posted a video on Facebook showing himself at the Library of Congress in Washington, D.C., standing in front of the Federalist Papers, a collection of 85 essays written by Alexander Hamilton, James Madison and John Jay in 1787 and 1788 to promote the ratification of the U.S. Constitution.

In the video, Koller argues that in Federalist 68, Hamilton stated the Electoral College was needed to ensure the president of the nation had the “requisite qualifications” as well as to detect foreign meddling.

“No election in modern history has been so plagued by the influences Hamilton warned us about,” Koller says in the video.

The irony of this line of reasoning is not lost on Koller, who would like to see a constitutional amendment dismantling the Electoral College and allowing the president to be elected by a popular vote. The basis of his argument stems from the legal theory of originalism, interpreting the constitution to reflect the intentions of “Founding Fathers” in the late 18th century. The theory was championed by none other than the late Supreme Court Justice and arch-conservative Antonin Scalia.

Back in Sacramento, hundreds of protesters gather in front to Capitol chanting “One person, one vote” shortly before the electors convene in the California State Assembly chamber. Signs and placards with the logo from the hit Broadway musical Hamilton encouraging an Electoral College revolt are scattered among the crowd.

Inside the state house, Koller takes a seat with 54 other electors. There isn’t much choice for those casting the true presidential vote. The program reads, “Ballots are cast for the president of the United States: Hillary Clinton.”

Only two of 38 electors defected in Texas, with Suprun casting a ballot for John Kasich and another choosing Ron Paul. Four of 12 electors in Washington cast protest votes, with three writing in Colin Powell and one writing in Native American activist Faith Spotted Eagle. Another Democrat in Hawaii later wrote in Bernie Sanders.

During the pomp and ceremony of the Electoral College process in the Assembly chamber, it’s clear the Hamilton Elector movement is a bust across the county. More Clinton electors defected than Trump electors.

In flouting the law and writing in another name, Koller’s action would be largely self-sacrificial. The 110 ballots have no room for selection: There are 55, one per elector, with Hillary Clinton’s name for president, and 55 with Tim Kaine’s name for vice president. All that’s needed is a signature affirming the will of California voters.

Walking out of the state house in the chilly afternoon, there’s solemnity in the air—not of upholding a sacred two-century-old constitutional process of 538 functionaries deciding the president of the United States, but of that process directly going against the will of the people. More than 2.8 million more voters cast their votes on Election Day for Clinton, rather than President-elect Trump.

“A solid footnote in history is a good thing,” Koller says, musing on his failing efforts to block a Trump presidency.

“The long game is that we need to abolish the Electoral College,” Koller says before he begins an interview with a CBS affiliate in Sacramento. “We have to have the courage to stand up for democracy—it’s clear that Trump won’t.”

Issue October 6, 2022 - Local artists open up their studios and invite the public behind the scenes of their creative process.