You are the owner of this article.
Edit Article Add New Article
Home
Now
News
Opinion
Entertainment
People
Ads
About Us

The intensity of the 2018 election season feels like an eternity ago, when public water advocates and California American Water supporters waged a battle over Measure J.

That's when Monterey Peninsula voters, by a margin of 56-44, said yes to the ballot measure, compelling the Monterey Peninsula Water Management District to determine whether it is feasible to buy out Cal Am and, if so, pursue an eminent domain process to acquire the private water utility.

Now a year-and-a-half later, we are still waiting for an answer to the first question: Is it feasible to buy out Cal Am?

In December, MPWMD's board heard initial findings on feasibility from several consultants, and voted to approve spending $1.2 million on a more extensive plan evaluating the feasibility question.

That plan, a 215-page environmental impact report, was released today, June 18, in draft form. It is now circulating for public comment, with a deadline of Aug. 3 to submit comments. (There will also be a public meeting at 5pm on July 9, via Zoom.)

The draft EIR, titled "Potential Acquisition of Monterey Water System and District Boundary Adjustment," looks at several different scenarios under which the water district would acquire Cal Am, including or excluding different properties within and beyond its 55-square-mile service area. 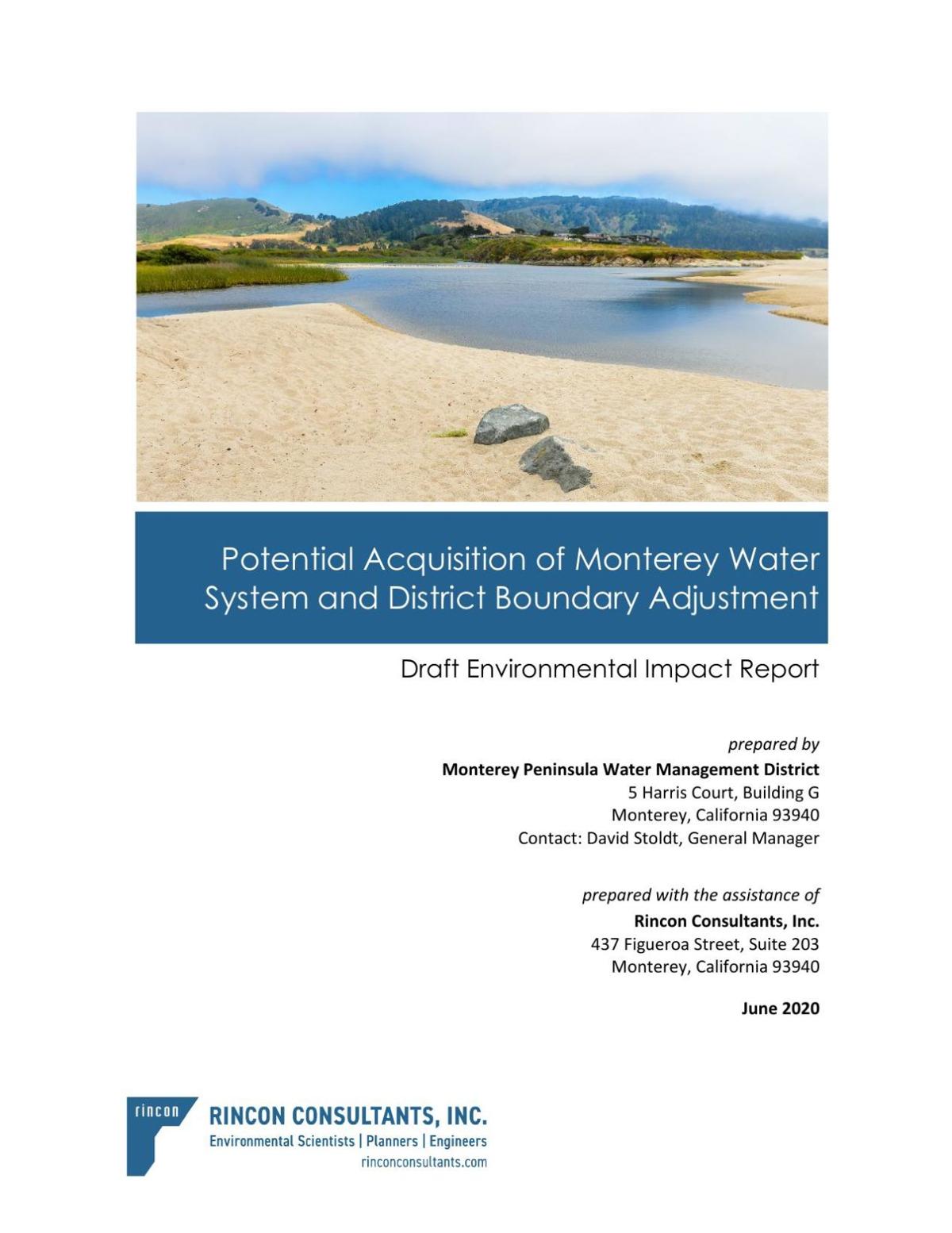 One scenario evaluated is for MPWMD to acquire Cal Am, then to contract with a private third-party operator to manage the water utility, which would be more expensive than the water district operating the system itself.

If the district itself runs the system, according to the draft EIR, they would offer jobs to "approximately 77 of the 81 existing [Cal Am] staff," and would add about 10 new administrative positions related to billing, finance and customer service.

The system serves about 40,000 customers on and around the Monterey Peninsula.

One piece of property not discussed in the draft EIR is Cal Am's proposed desalination plant in Marina. If included, that plant would make the price of Cal Am's system more expensive; just this week, the MPWMD board was divided, but voted 4-3 to send a letter to the California Coastal Commission asking them to deny the desalination plant. In some public discourse, support or opposition to the desal plant has come to be a proxy for support or opposition to public acquisition of Cal Am, but they are not the same thing—Cal Am with or without desal is still subject to Measure J and this feasibility analysis, as approved by voters.

Also explicitly omitted from the draft EIR is that water use has declined during the pandemic.

Of note is that both prior to the Measure J vote and ever since, Cal Am officials have reiterated that the company is not for sale, and so if the MPWMD board votes to proceed with a public takeover, litigation is a sure next step in the process.

As far as the role of an EIR to explore environmental impacts—how the takeover by MPWMD would influence greenhouse gas emissions, water use, wastewater generation, air pollution, noise pollution and so forth—there would be little to no anticipated change, given that MPWMD is proposing to continue operating the same system currently owned and operated by Cal Am.