Hand ‘em over, Carmel. The public’s trust depends on it.

That was the decision by Monterey County Superior Court Judge Robert O’Farrell on Sept. 14 in the case of Royal Calkins vs. City of Carmel-by-the-Sea, a fight over documents purporting to show the qualifications of City Attorney Glen Mozingo.

In a hearing on Sept. 7, O'Farrell indicated he was leaning toward the documents being made public.

A week later, he published his decision, rejecting the city’s claims for why the documents should not be disclosed. The public has a right to know whether its funds are being properly spent and if the Carmel City Council is doing its job.

“The city ask the public to trust them, but the law requires the city to substantiate that trust,” O'Farrell writes.

The documents in question were shared by Mozingo with the Carmel City Council in closed session on June 4, but not left in the city’s possession.

Calkins and the Weekly filed separate requests under the California Public Records Act for copies of those documents; both were denied. Among the reason the city gave for the denial: the city does not physically hold the records. 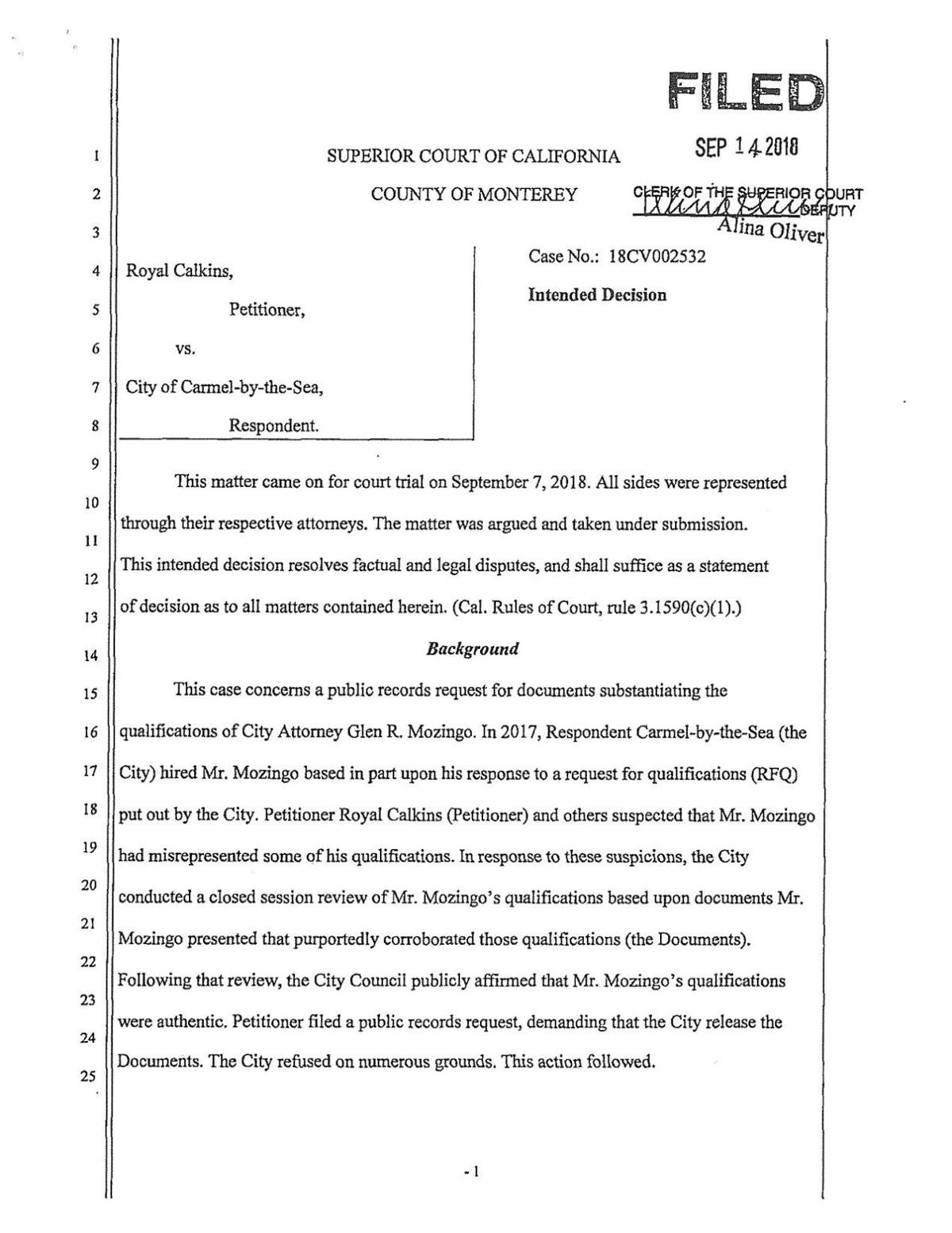 “The mere fact that the documents may be in the possession of Mr. Mozingo, rather than the city, is irrelevant,” O’Farrell wrote, citing the 2017 case City of San Jose v. Ted Smith, in which San Jose lost its bid to keep city-related information on employees’ personal cell phones private.

O’Farrell also rejected the city’s arguments that the documents were exempt under the Brown Act, the state's public meetings law. The city tried to assert that because they were reviewed in a closed session they could not be made public.

In addition, the judge rejected arguments that it was a personnel matter and that the documents were subject to pending litigation by Calkins, among others.

Carmel attorneys tried to make the case that the documents were part of a personnel review, but O’Farrell said it was unclear if the exemption applied.

As for the pending litigation argument, O’Farrell pointed out that Calkins’ threatened litigation over Mozingo’s records only came after the June 4 meeting. The city tried to argue that a previous threat made by Calkins in April applied, but O’Farrell determined that threat concerned different documents.

“The public has a general interest in the ‘prevention of secrecy in government,’” O'Farrell wrote, citing another 2003 San Jose case.

“The city has expended (and will expend) significant public funds to employ a city attorney whose qualifications have come into question,” the decision continues. Because of that, the public has a strong interest in ensuring funds are properly spent, that the council adequately reviewed Mozingo’s materials and that the council is “fulfilling statutory duties.”

“This is a great decision that corrects some outrageous behavior by the city of Carmel,” Calkins says. “Unfortunately it’s going to take a lot more than this to fix things in Carmel, but fortunately a lot of people in Carmel are figuring things out and expecting better behavior in the future.”

Mozingo could not be reached for comment on the decision, or to say whether the city might consider an appeal. In court papers, the city attacked Calkins, and early on referred to Calkins as a "failed journalist."

O'Farrell's decision doesn't specify the amount of time the city has to provide the documents, but calls for them to be handed over "expeditiously."

Calkins expects that his attorney, Neil Shapiro, will request the city cover his attorney's fees.

The power of the press: coverage of media and the First Amendment.

We're getting a little meta here, but that's what this era calls for. With the president of the United States not only dismissing credible med…

The Secret Society that is the Carmel City Council will finally be exposed. Was this corruption carefully orchestrated by Mayor Dallas?