You are the owner of this article.
Edit Article Add New Article
Home
News
Opinion
Entertainment
People
Ads
About Us 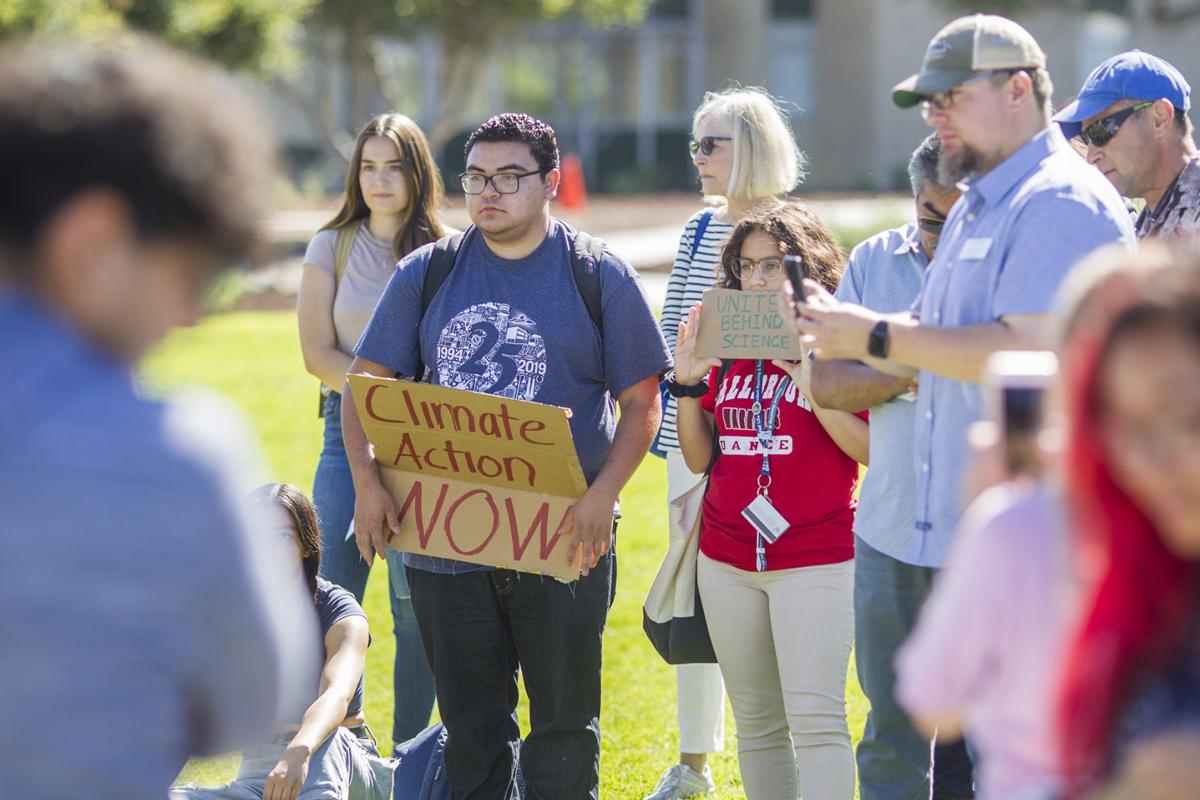 Over 100 students, many with handmade signs and posters, gathered outside the student union at CSUMB on Friday, Sept. 20. 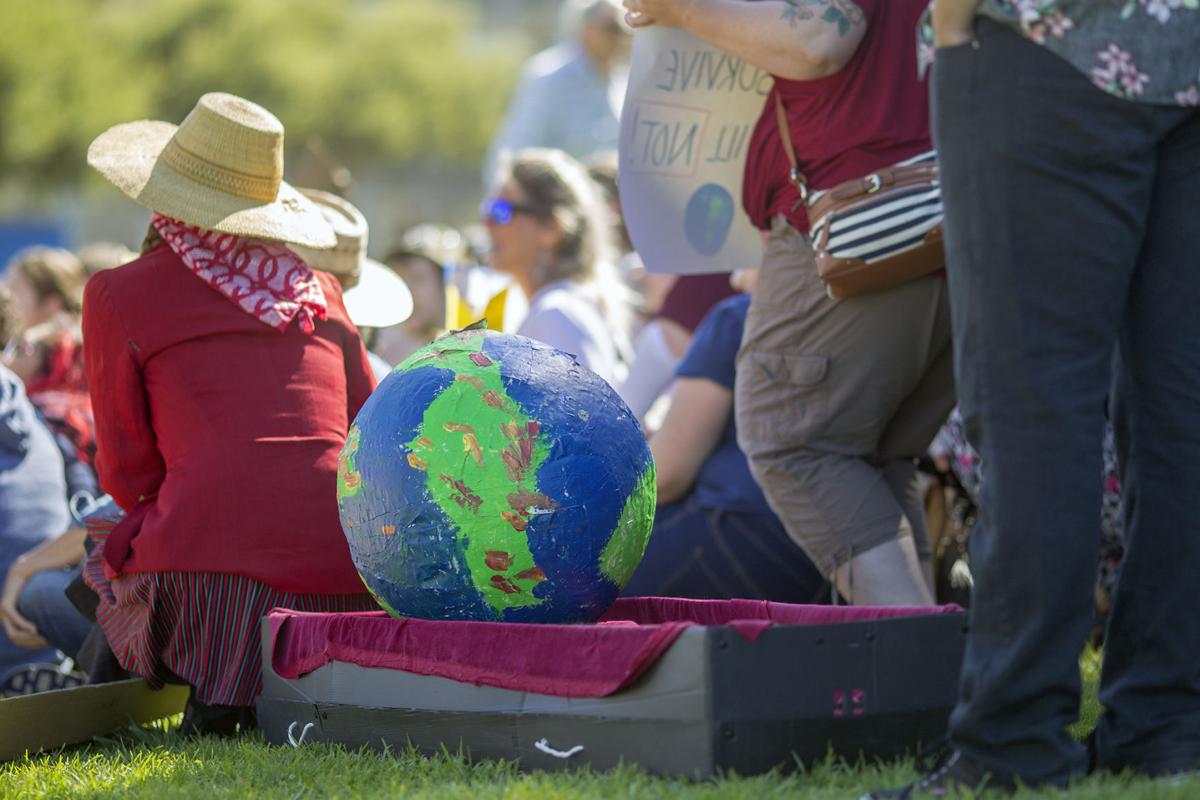 People sit next to an art piece depciting planet Earth in a coffin outside the CSUMB student union.

Over 100 students, many with handmade signs and posters, gathered outside the student union at CSUMB on Friday, Sept. 20.

People sit next to an art piece depciting planet Earth in a coffin outside the CSUMB student union.

On Friday, Sept. 20, hundreds of Monterey County residents joined hundreds of thousands of people across the U.S. and millions worldwide in a youth-led effort to draw attention to the climate crisis. Climate strikes occured in over 1,100 locations across the country, three of them within Monterey County.

As students, teachers and community members in Salinas gather outside Salinas High School, Mateos Lozaro, a sophomore, crowd around a megaphone with fellow students Allison Gray and Emma Buchannan to lead chants. In August, the three founded a local chapter of the Sunrise Movement, a national youth-led movement urging climate action.

“I call them the tripod,” says Evelyn Contreras, Lozaro’s mother. “They’ve done everything.” When Mateos got involved with the Santa Cruz chapter of the Sunrise Movement a year and a half ago, Contreras drove him to meetings until he decided to start a local group. In May, Lozaro organized and hosted a town hall to raise local awareness of climate change. The strike marks the Salinas Sunrise Movement’s first major action, and they hope the event will spur more students to join. Over 80 people marched from the high school to Salinas City Hall, accompanied by a chorus of dozens of honking cars.

Fifteen miles away, over 50 students and residents of Monterey hold signs and chant on either side of Del Monte Avenue at Window on the Bay park. A person in a squid costume, complete with beak and tentacles, paces the street. Two tentacles carry cardboard gravestones: one for climate change, the other for Earth. A sign hangs around the person’s neck issued a demand: “Choose Your Gravestone.”

Organizer Stephanie Flaniken, a resident of Pacific Grove, says she was inspired to host the event after following the activism of Swedish teenager Greta Thunberg. “If young children can stand up and speak,” she says, “we need to listen and take action.”

Also in attendance are four high school students from Stevenson School in Pebble Beach. For Lilah Parker, a sophomore, dealing with climate anxiety is complicated. “It feels like a constant balance," she says. I don’t want to be fatalistic, but I know maybe a species I know and love won’t be there for my kids. I don’t want to think about it, but I don’t want to do nothing.”

Earlier in the day, on the campus of CSU Monterey Bay, over 100 students, faculty and community members, as well as several dogs, congregate on the quad at the Otter Climate Strike. Attendees carry signs with tones ranging from twee (“Otter ’Bout Time to Act”) to blunt (“Mass Extinction Would Suck”). An open coffin containing a paper mache globe sits beside a makeshift banner fashioned from an old bed sheet, on which people scrawled messages of solidarity.

Carolyn Hinman, a recent CSUMB alum, stands in front of a table covered in blank postcards, encouraging attendees to write a note to U.S. Sen. Dianne Feinstein urging climate action. Hinman organized the event with help from friends in the CSUMB sustainability office.

“This was a last minute thing,” she says. After looking at the national climate strike map last Friday and not seeing many local events, Hinman decided to create one. “I just kind of had to hold my breath and hit the submit button.”

The big turnout was a surprise on a campus that doesn’t see many protests. “I haven’t seen it as active as this,” says Dan Fernandez, a CSUMB professor of physics and environmental studies. “I think this is the start of something bigger.”

After some brief speeches and chants, attendees break out into small groups to discuss what actions they can take in response to the climate crisis.

In attendance at both the CSUMB and Salinas events are members of Monterey Extinction Rebellion, a local chapter of the international movement demanding a government response to climate change. Their members include Mark Roth, who goes by the name “Slog,” and Michael Gentry, alias “Modita.”  Mark Richer, a former college activist, helped found the organization in March of this year. The other founder, Vanessa Mekarski, says “terror and disbelief” over climate change led her to action. “I woke up in January 2019 in a total panic. It just hit me this winter the severity of the situation. Why aren’t we doing anything? Why are we all not refusing to continue?”

Since March, the group has grown from three to 12 active members, and Gentry expects more for their next meeting at 6pm on Tuesday, Sept. 24 at Unity Church in Monterey.

Issue July 2, 2020 - The Declaration of Independence set out bold principles for American freedom -- for some, but not for all.