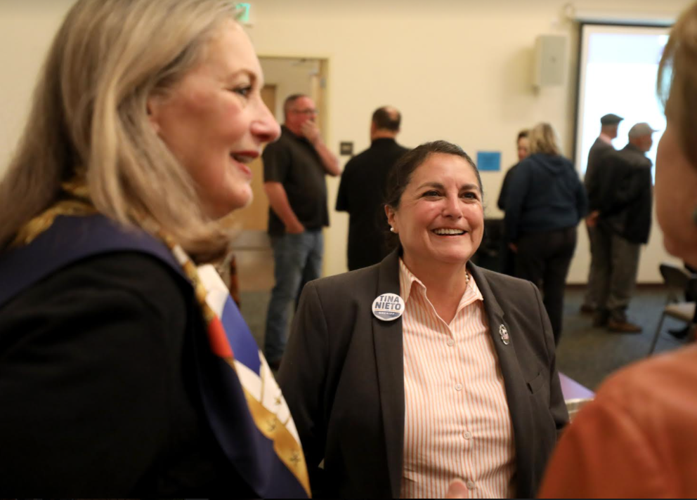 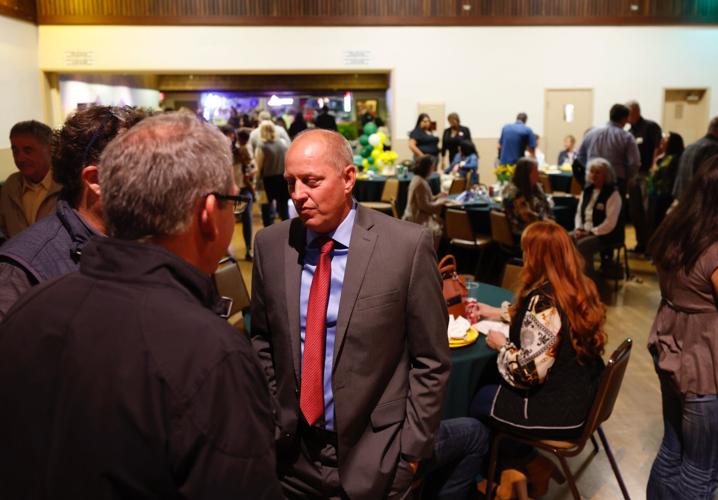 The election night party for Jeff Hoyne, at Portabella Restaurant in Carmel, was as low-key as his attitude toward the campaign. "Win, lose or draw, I'm pretty stoic about it," he said before the election.

Early returns showed Hoyne, the chief of police in Del Rey Oaks and Monterey Regional Airport, trailing in fourth place with 7.8 percent of the vote.

The vibe was different in Marina, where Marina Police Chief Tina Nieto was celebrating at the Carpenters Union in a festive environment with a drawing for prizes, barbecue and Hawaiian king bread on the menu. (The food was prepared by the Monterey/Santa Cruz Counties Building Building & Construction Trades Council, which supported her campaign.)

Local politicians and Democratic Party leaders were also at Nieto’s event, including County Supervisor Luis Alejo. “Tina is the right leader to make the right changes,” he says.

Besides unions, there was also a big presence of Marina locals, including City Councilmember Cristina Medina Dirksen and Tony Raffoul, who has has lived in Marina since 2015 and owns the cannabis dispensary Element 7. “Tina is part of the community,” he says. “Everybody here knows Tina. That’s why I support her.”

Democracy remains a fragile enterprise in need of a strong and free press. Newspapers are closing. Social media is toxic.
There is an alternative.
You can help.
Monterey County Weekly has launched the Fund for Independent Journalism to allow donors to make tax-deductible contributions now through December 31.
Every donation helps protect local and independent journalism and keep democracy intact.

Monterey County Democratic Party Chair Karen Araujo started crying, happy with the numbers. “Tina represents change in the Sheriff’s Office,” she says. “She cares about humanity, people in our prisons. This is wonderful news.”

Monterey County Elections officials will continue counting provisional ballots and vote-by-mail ballots that are postmarked by June 7 (Election Day) so final numbers are still to come. If Nieto does not cross the 50-percent threshold, she will go to a runoff with the second-place finisher, Joe Moses, a current captain in the Sheriff’s Office. As of 9pm Tuesday night, he was trailing 6,608 votes behind Nieto, with 28.4 percent of the vote.

“Someone told me a win is when you can walk away from a campaign and you are proud of it,” Moses told supporters before the first report of votes cast. “Whatever the numbers show today, we already won.”

Moses celebrated with about 100 supporters—also over barbecue and three cakes, including one with an image of his face—at Spreckels Memorial Hall. Outgoing Sheriff Steve Bernal, who endorsed Moses, was among the guests. “He’s really led me through this campaign—thank you so much, sir,” Moses said to Bernal.

Moses says even if he doesn’t win, he hopes to stay on in the Sheriff’s Office, where he is responsible for running the jail, mostly to try to address the mental health and substance abuse issues prevalent among inmates. “My intention is to get a behavioral health center started,” he says. “I believe very strongly we need that in this county. I would stick around to make sure that happens.”

Justin Patterson, a sheriff’s deputy with 22 years of experience in the Monterey County Sheriff’s Office, was in the third-place position as of 9pm Tuesday. He was celebrating Election Day at Casa del Sazón with supporters, although he wasn’t eating—he does intermittent fasting, and was going on just water through Election Day, after a breakfast of eggs Benedict.

Win or lose, he said he’d met great people through the campaign and that his law-and-order message resonated: “The thing I think I learned the most of is that people want law and order again,” Patterson says.

Monterey County voters will have their say during the Nov. 8, 2022 election about who represents two newly drawn districts in Congress, but th…