The Pacific Grove City Council voted 7-0 on Wednesday night to approve a resolution created by the city's Diversity, Equity and Inclusion Task Force that officially apologizes for the burning of a Chinese fishing village at Point Alones in 1906, as well as racism and discrimination faced by Chinese Americans over 170 years.

The historic resolution is scheduled to be read aloud this Saturday, May 14, at the Walk of Remembrance, an annual event that memorializes the suspicious fire that destroyed the village and drove Chinese residents out of Pacific Grove for generations. The walk was created in 2011 by a fifth-generation descendent of the village, Gerry Low-Sabado, who passed away last August.

Low-Sabado's husband, Randy Sabado, choked back tears as addressed the council in chambers before the vote.

"I'm here to put a face and a voice to a community that has gone faceless and voiceless and has waited and waited and waited for 170 years for this acknowledgement and apology for the social injustices inflected on people who just wanted to live their lives in peace and be treated equally and fairly," Sabado said.

While the apology does not erase past injustices, it is a new beginning and a commitment to do better, Sabado said. It sends a message that past acts of racial hatred are wrong and will not be tolerated.

Another man identifying himself as a seventh-generation descendant of the villagers said the apology brought tears to his eyes. He visits P.G. from time to time, but feels like an outsider, even though his ancestors helped build the town. He said he hoped for a reconciliation and called the apology "a beautiful first step."

Kathy Biala, a Marina councilmember who spoke on behalf of herself as a Japanese American, said the apology, written by Kim Bui, a member of the P.G. Diversity, Equity and Inclusion Task Force, was moving to her.

"As an Asian American, though not of Chinese decent, my immediate response was of a deeply personal one, being awe struck that such a beautiful and thoroughly researched document could actually be before this body for approval today," she said. "It is as if our collective sad Asian histories are now finally being made public with sensitivity and comprehensiveness of the tragic past and honoring our present lived experiences."

Biala, whose relatives were interned in Japanese internment camps during World War II, said the history recounted in the apology was a "sad reminder that racist history does in fact repeat itself. We can say out loud as a society that we deplore racism and will not allow it to be swept under the rug when it shows its ugly face.

"You have chosen to know the truth about the hatred vented among so many hapless people merely because they are of a different color," Biala told the P.G. council members.

Bui, the first Vietnamese American director of a library in the U.S., having led the Monterey Public Library before retiring, used her researching and communication skills to compose the sweeping resolution. It references the history of Chinese Americans in the U.S. from the 1850s to the present and details the discrimination and racism they faced up until recent times when they were targeted for hate crimes during the Covid-19 pandemic.

The resolution (attached below) also details specific racism and discrimination encountered in Pacific Grove, including looters at the time of the fire and restrictive covenants in deeds that banned sale of houses to Chinese and other people of color. It also squarely focuses on the Feast of Lanterns, the decades-long P.G. annual event that culturally appropriated Chinese culture.

On Wednesday, Bui read the resolution aloud while displaying slides that depicted the Chinese fishing village and its inhabitants, documents and other historical materials.

When it came time for the vote, some council members advocated for Bui to once again read the resolution at the Walk of Remembrance. Councilmember Chaps Poduri told Mayor Bill Peake that he or another elected official should read the city's official apology. Peake instead suggested Poduri read it, and Poduri agreed.

The Walk of Remembrance, which begins at 1pm, Saturday, at the Pacific Grove Museum of Natural History, will also serve this year as a celebration of Low-Sabado and her years of activism seeking what she called "change with kindness." Other descendants of the Chinese fishing village are expected to attend, as will members of regional Asian American and Pacific Islander organizations. California State Controller Betty T. Yee is scheduled to speak. 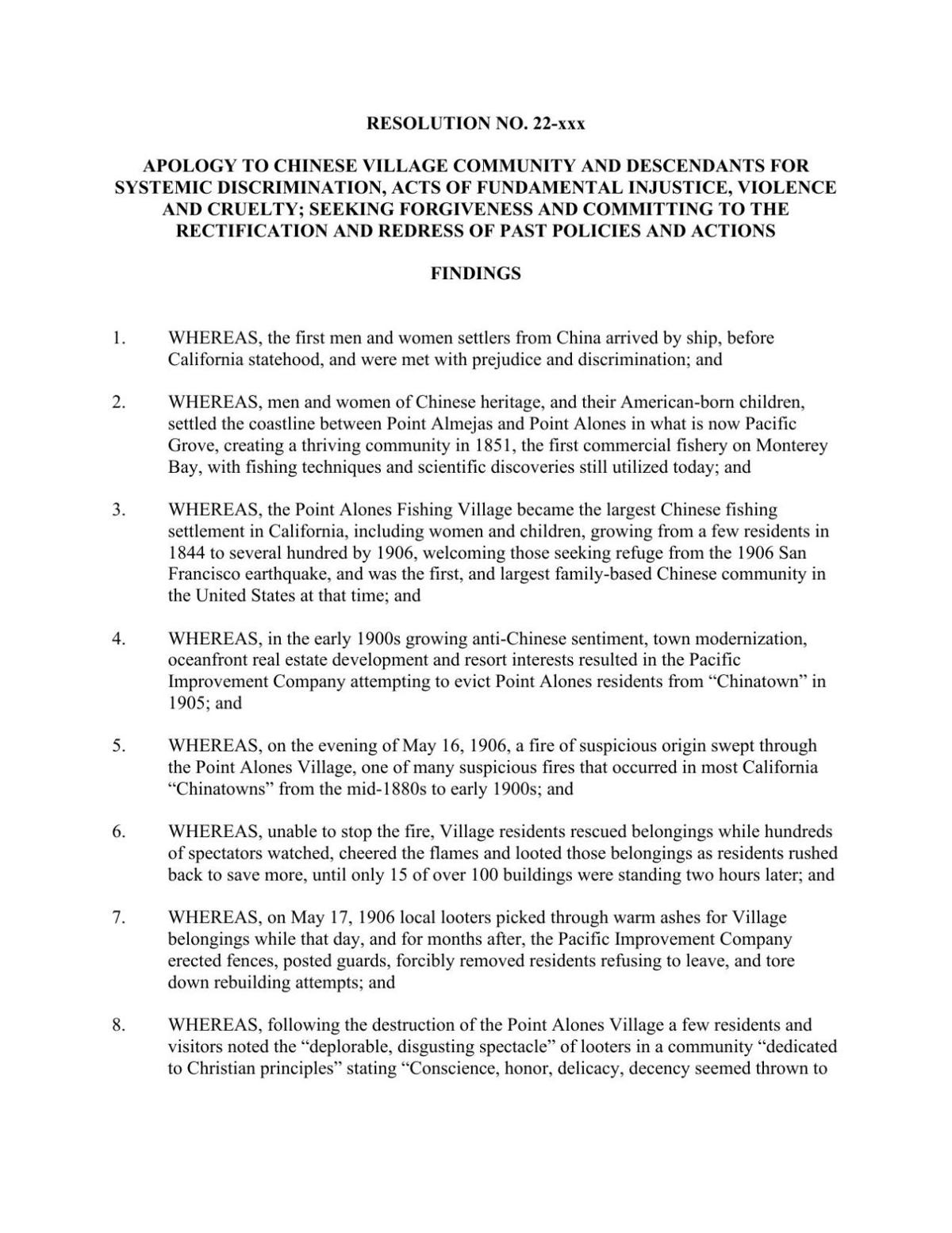 Feast of Lanterns: The Weekly's coverage

A collection of articles from the Weekly's archives about and related to Pacific Grove's Feast of Lanterns, a festival that originated in 1905…

Issue May 19, 2022 - Moved by poetry, artist Enrique Martínez Celaya presents his own take on Robinson Jeffers and the art of exile.