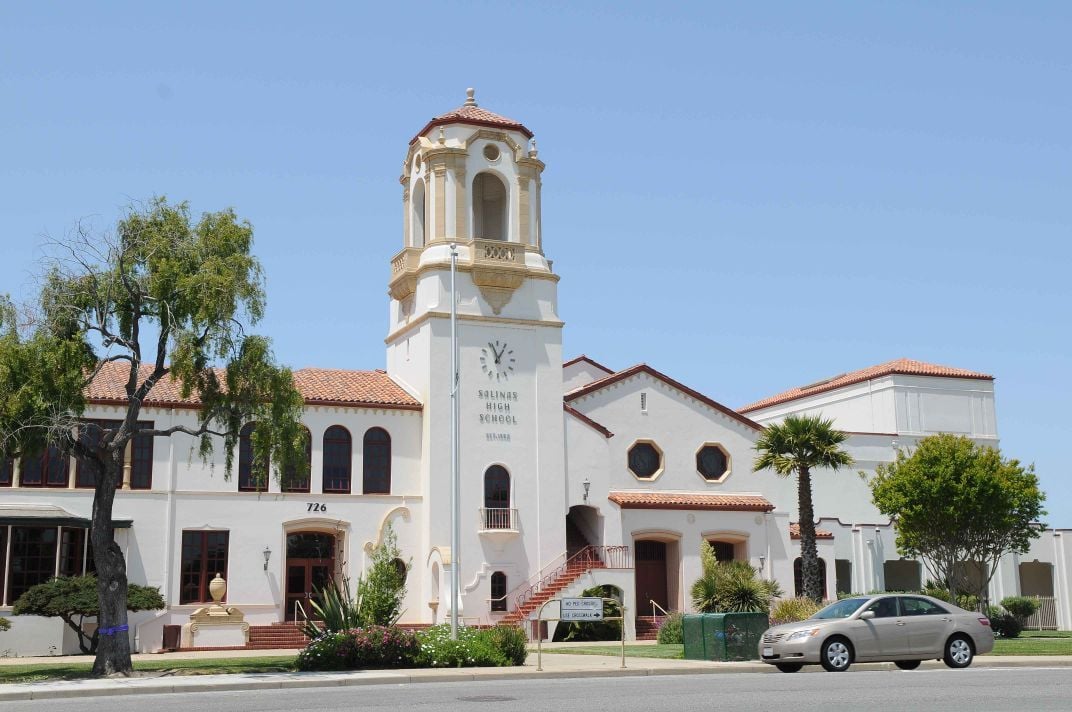 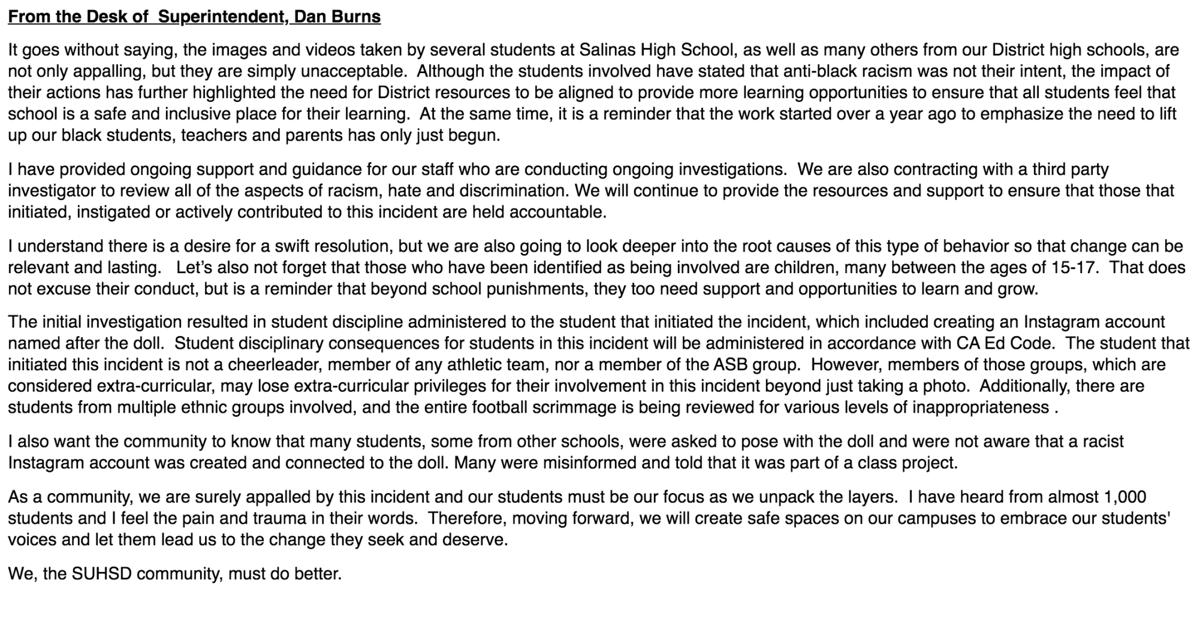 Last Friday Aug. 20, Salinas High celebrated its football jamboree. But instead of being remembered for cheer and sportsmanship, it was dominated by a disturbing, racist video that was circulated on social media.

It began with an Instagram account made on behalf of a baby Black doll, which had a caricatured face drawn over its face. Photos show white and Latino kids posing with the doll, which they named Shaniqua, and some include comments using the N-word; video clips show kids posing with the doll, as well as stomping feet on the doll. They named the Instagram account @shaniqua.shs for Salinas High School.

The account has since been made private and all posts were deleted, but not before others captured the racist stereotypes with screenshots. Those screenshots were then posted as part of a video on TikTok meant to reveal the racist behavior, and cause a social media firestorm of their own, with more than 26,300 views as of Monday, Aug. 23 at 5pm. The video, prompted a petition on charge.org demanding the school address the incident. The petition has 7,500 signatures and counting.

The day after the video exploded, Salinas High School administrators say they first became aware of the doll’s account and racist tropes that multiple students were participating in. The district released a statement on Saturday, Aug. 22, saying they have started an investigation including identifying the students who were directly involved.

The statement is in English and Spanish and pops up on SUHSD’s main landing page with with an exclamation point  that  says “view important message.”

“The SUHSD does not condone this type of behavior and although the District has taken steps to support our African American students and staff, this recent incident demonstrates how much more support is needed,” the statement reads. “We urge families to also take time to talk with their students about the damaging effects of racist behavior. Counseling is available at all of our school sites for any students who may need support.”

A longer version of the statement goes on to state: “Racism and racial injustice are in direct opposition to the District’s values. Our District will continue our efforts to show that racism and racial injustice have no place in our schools. We are committed to maintaining a safe, positive school environment where all students, staff, parents/guardians, and community members are treated with respect and dignity.”

School officials declined interview requests, and spokesperson Marcos Cabrera says the only communications about this incident to the press and the public from the Salinas High School or SUHSD administration will be made through written statements.

In a statement issued at about 6:15pm on Monday, SUHSD Superintendent Dan Burns said in a statement: "It goes without saying, the images and videos taken by several students at Salinas High School, as well as many others from our District high schools, are not only appalling, but they are simply unacceptable…

"Although the students involved have stated that anti-black racism was not their intent, the impact of their actions has further highlighted the need for District resources to be aligned to provide more learning opportunities to ensure that all students feel that school is a safe and inclusive place for their learning.  At the same time, it is a reminder that the work started over a year ago to emphasize the need to lift up our black students, teachers and parents has only just begun."

He adds that the district is contracting with a third party (the party is not identified) to review "all the aspects of racism, hate and discrimination," in addition to the district's own investigation of students involved. Burns also writes that not all students who posed in photos were aware of the racist Instagram account; "many were misinformed and told that it was part of a class project," he writes. (View Burns' full statement below.)

The Salinas Police Department has received two calls about the racist video, but spokesperson Miguel Cabrera says there does not appear to be a crime and the school district is handling the situation.

As the TikTok video goes viral on social media, parents and students are demanding that Salinas High School does more. Gabriela Silva, who has a Latina daughter at Salinas High, says in Spanish the district must make structural changes. She says it is important to include enthic studies classes to prevent situations like this; the district has recently come under fire from activists asking for the school to end instruction on critical race theory, part of a nationwide trend of activist parents engaging at school board meetings.

Hannah Frances is the mother of two biracial kids; her daughter is a junior at Rancho San Juan High School in SUHSD, and she says this incident brings racism too close to home. “It’s no longer on TV,” Frances says of her daughter. “It’s something she is experiencing in her own city within her own school district.

“If this thing isn’t addressed quickly, it could be really devastating for Salinas youth,” Frances adds. Frances says the video and the images have traumatized Black and biracial kids, causing fear and stress.

Frances’ daughter is part of the Associated Student Body and learned about the racist account through a group text, and she says some of the teens involved are involved in various leadership and athletic roles, including being part of ASB, football or cheer teams. “I think the kids [involved in this] should not be allowed to be in leadership positions,” Frances says.

In Burns' statement, he writes that the student who created the Instagram account has been identified and disciplined and that student is not a member of any athletic team nor the ASB. Members of these groups, he adds, may lose extracurricular privileges depending on what the investigation reveals.

The board of SUHSD has a scheduled meeting tomorrow, Tuesday, Aug. 24 at 6:30pm. A group of students are planning to speak up against this incident and appropriate disciplinary action. The meeting will be at the administrative office, 431 West Alisal St., Salinas. People can submit comments to beatriz.smith@salinasuhsd.org by 3pm the day of the meeting, or can attend and speak in person.

This post has been updated to include information provided in a statement issued by Superintendent Dan Burns after the post was originally published.