Seaside has sent a message to its undocumented, law-abiding residents: welcome.

In some respects the vote was only symbolic. Seaside Police officers do not—and will not—ask for someone's immigration status; therefore, they have no knowledge on the matter to share with federal immigration agents. Seaside Police Chief Robert Jackson made it very clear during the meeting that his department has no jurisdiction, or intent, to enforce immigration matters.

The department is strictly concerned with public safety.

But, by becoming a "sanctuary city," Seaside sent a clear message to the federal government that it is a city of inclusivity, and that undocumented immigrants have nothing to fear from its police officers so long as they're not committing a crime that could land them in the county jail.

At the beginning of the meeting, Seaside City Manager Craig Malin—whose grandparents were immigrants from Poland—also made clear that there is no clear definition of what a sanctuary city actually is.

Nonetheless, he said, the word gained new meaning after President Donald Trump's Jan. 27 executive order regarding immigration. That order states, among other things, that cities who do not follow federal law by communicating with other government entities regarding immigration status "are not eligible to receive federal grants, except as deemed necessary for law enforcement purposes by the Attorney General or the Secretary."

That point was discussed at length, and again, the main takeaway is this: Seaside, which receives roughly $1.4 million annually in federal grants, does and will communicate with other government entities, but with respect to immigration status, it simply has no information to share.

Therefore, the city's police department is both fully in compliance with federal law, while at the same time posing no threat to its undocumented residents.

After Chief Jackson and Malin clarified those points, Malin introduced the sanctuary city resolution he crafted, which waxes poetic, and is a rebuke to the xenophobia that has gained increasing acceptance in some parts of the country.

"WHEREAS, The United States of America’s success has been founded on and sustained by successive waves of immigrants who leave all they and their families have ever known to secure the blessings of liberty and personal industriousness in a nation ever stronger for their contributions to it; and…"

About two dozen residents spoke in favor of the resolution, while only one resident spoke against it. A few of the residents even spoke to the council in Spanish, and in an example of the inclusivity the city is striving for—30-percent of its residents are foreign-born—a translator was on hand to translate the comments to English.

One point that came up repeatedly: Seaside has a history of being an active part of the civil rights movement—Martin Luther King, Jr. once made a visit to the city—and the resolution would be a proud continuation of that trend.

When public comment ended, City Council tweaked some finer points of the resolution's language. Councilmember Kayla Jones, who suggested the idea of becoming a sanctuary city in January, wanted to add a few items from a similar resolution the County Board of Supervisors approved in February. Mayor Ralph Rubio agreed, and also wanted it to be clear, in the resolution's item about Fort Ord, that immigrants have fought for the United States in all of its wars.

Councilmember Jason Campbell said that his mother is an immigrant, and came to America to make a better life for herself. "Saying immigrants are rapists and drug dealers is so insulting to this country," he said, referring to statements Trump made on the campaign trail. "Immigrants are self-selecting, and take great risk to leave their home. The idea that they would commit crime, that is just not who they are."

In the end, it was only Councilmember Dave Pacheco—the wild card on the council—who voted against the resolution, saying that he agrees with what it says, but that because he believes the city is already abiding by its tenets, it was unnecessarily divisive with respect to the federal government.

But the rest of the council believed, as evidenced by their votes, that for many in the room, the psychological impact of becoming a sanctuary city was important to maintain public trust, and after the vote was taken, the scene at City Hall became a celebration.

The revised resolution is attached below: 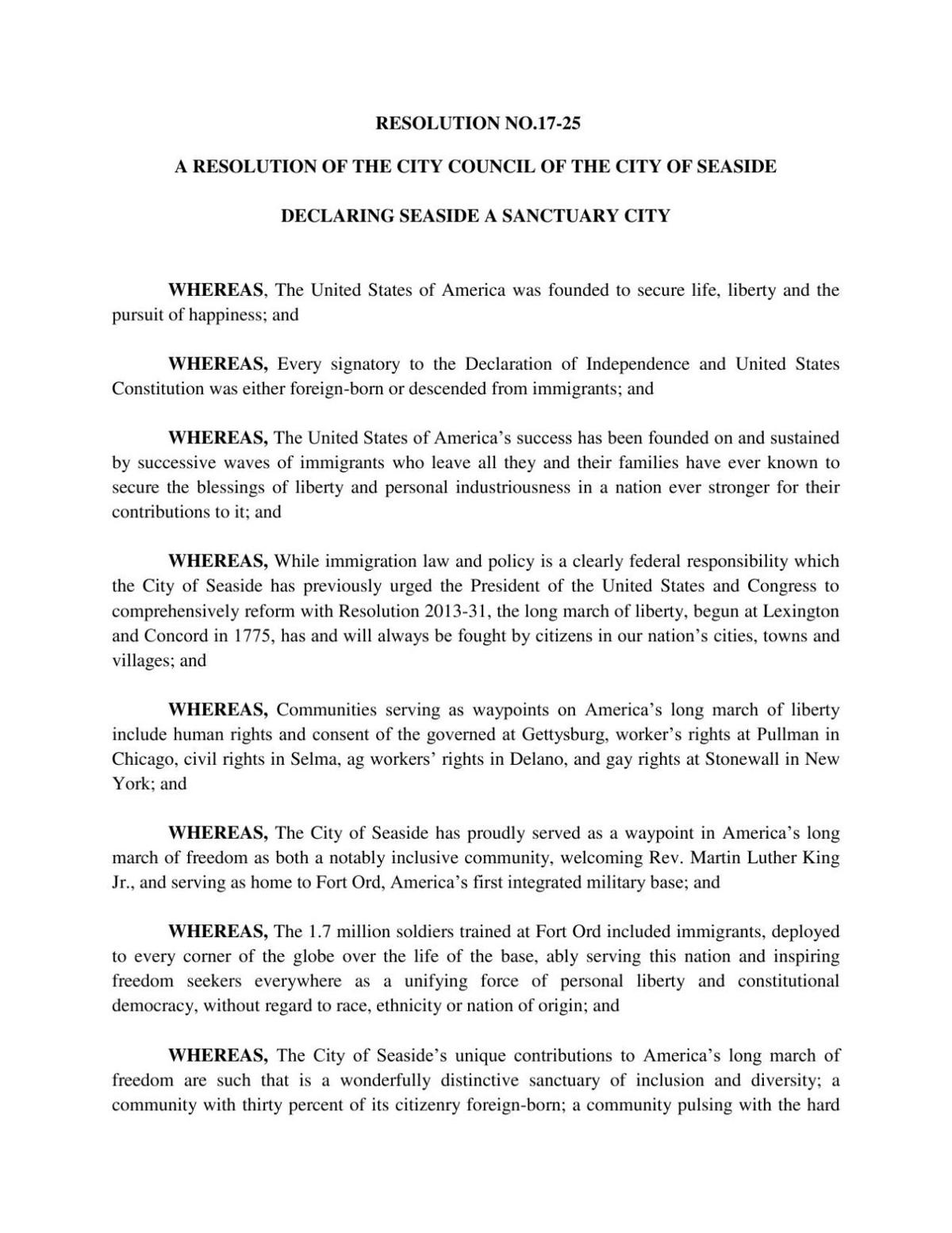