You are the owner of this article.
Edit Article Add New Article
Home
Now
News
Opinion
Entertainment
People
Ads
About Us 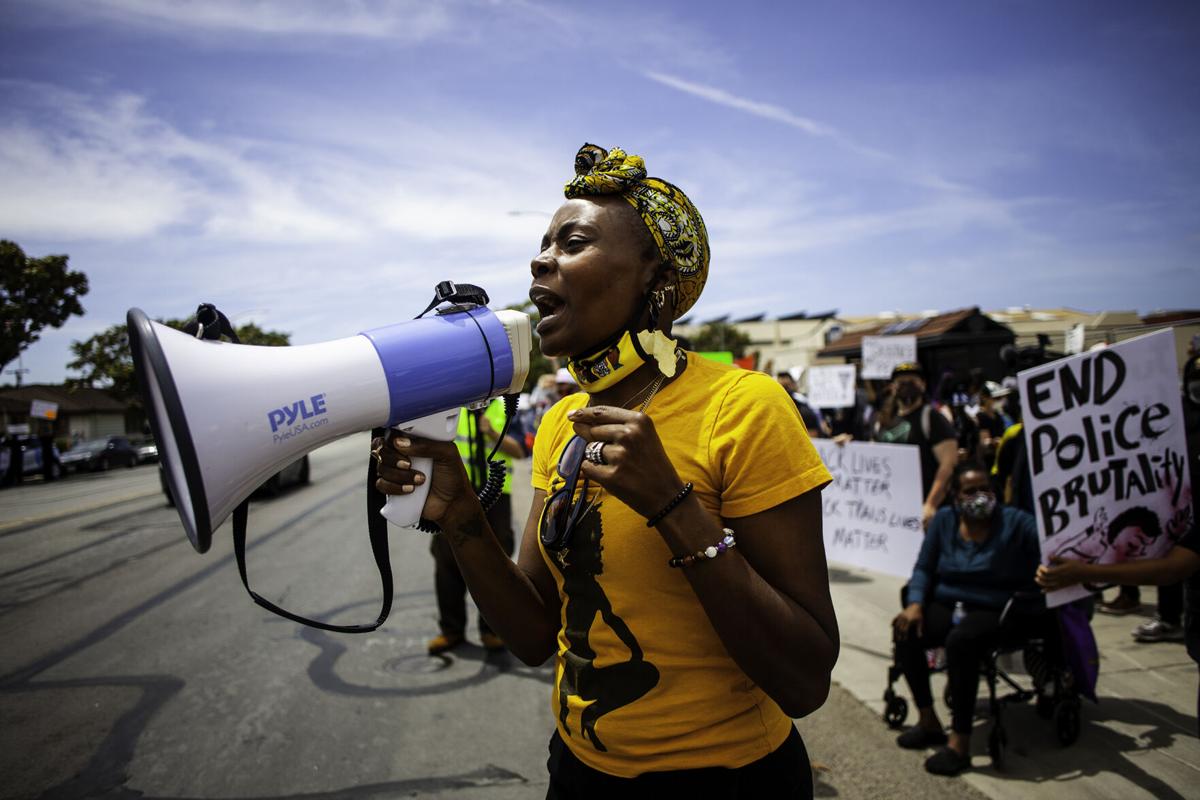 A woman calls out to the assembled crowd at a protest in Salinas on June 1, 2020. 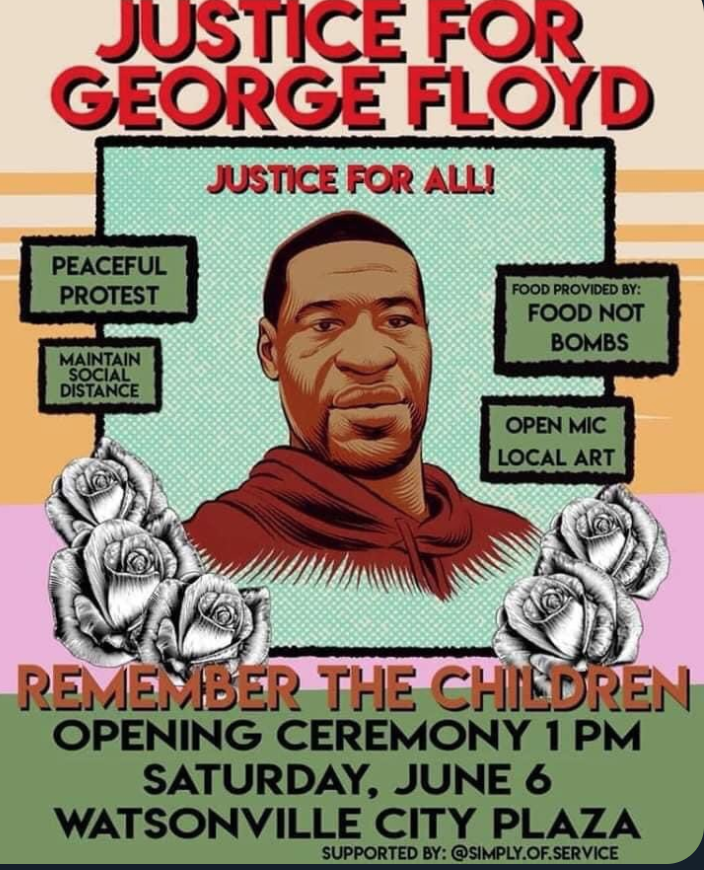 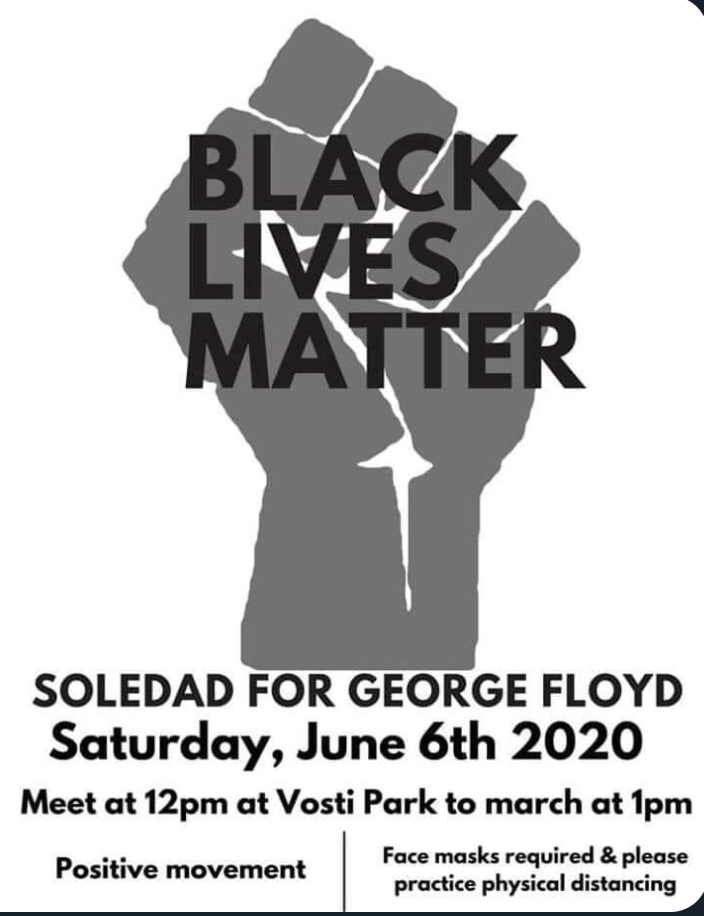 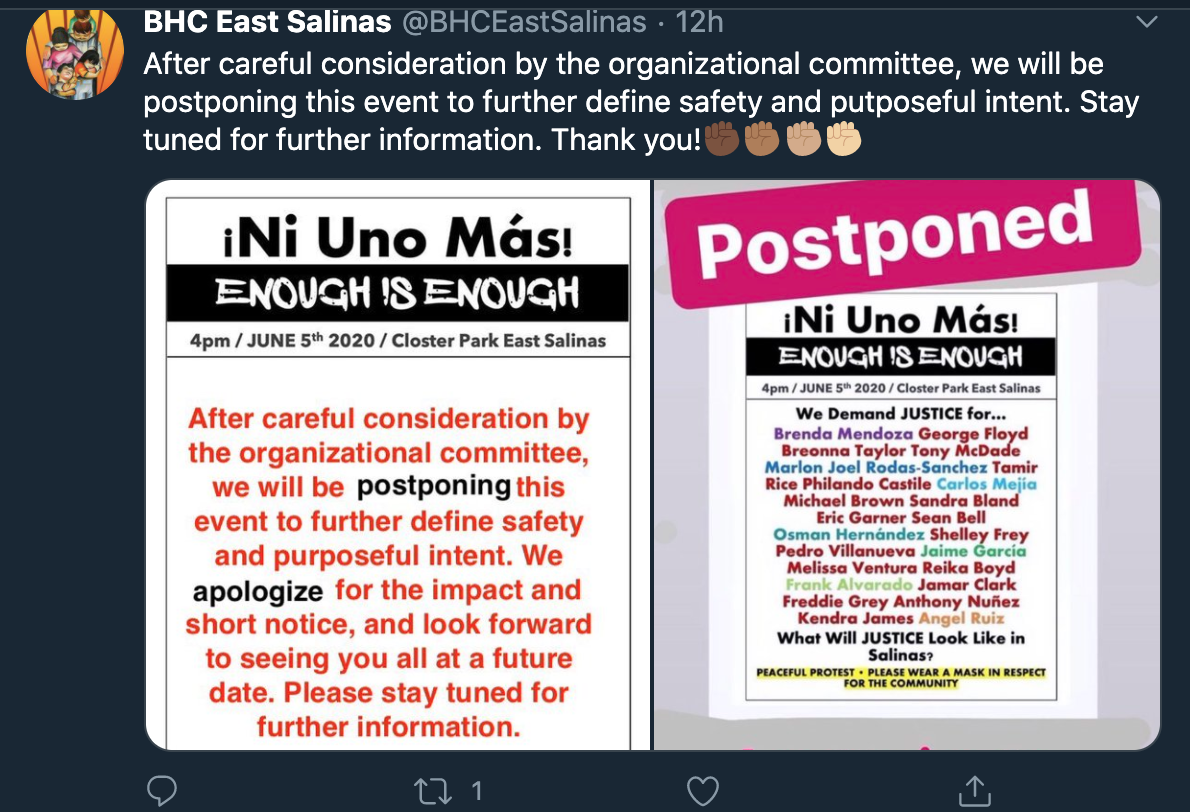 Sparked by the killing of George Floyd in Minneapolis on May 25, demonstrations and marches protesting years of systemic racism and injustice are continuing around the country, as well as in Monterey County, with more scheduled in coming days.

There have already been are least a half-dozen protests in Monterey, Seaside and Salinas since Saturday, with one of the largest gatherings and marches in Seaside on Tuesday, June 2, which drew an estimated 2,000 people.

More events are slated for this coming weekend in local cities, all billing themselves as peaceful protests. Organizers are calling on demonstrators to wear facial coverings out of respect for others (and to comply with Monterey County's health officer order) and maintain social distancing due to the Covid-19 pandemic.

UPDATE: Some protests have been cancelled or postponed since first announced earlier this week, including one that was previously set for 4pm today, June 5, at Closter Park in East Salinas.

"After careful consideration by the organizational committee we will be postponing this event to further define safety and purposeful intent. We apologize for the impact and short notice, and look forward to seeing you all at a future date," the tweet reads.

The flyer demands justice for black and brown people who have been killed in police interactions, and includes the names of Floyd and Breonna Taylor, a 26-year-old woman shot in her sleep during a “no knock” warrant search in Louisville, Kentucky. It also lists others, including some who were killed in Salinas, Osman Hernandez and Frank Alvarado among them.

The long list of names on the flyer includes Brenda Rodriguez Mendoza, who was shot by Salinas Police in March of last year during a mental health crisis she was experiencing after running out of bipolar medication and within weeks after giving birth.

The Monterey County District Attorney’s Office cleared officers of any wrongdoing, ruling the shooting was in self defense. Her death remains controversial to those who believe Rodriguez Mendoza should have received help, instead of fired upon.

Also on Friday, as part of a global "solidarity in surf" paddle out, protesters are gathering at 1pm on Del Monte Beach in Monterey (next to Wharf 2) to paddle out on surfboards—or boogie boards or floats, whatever you've got.

Demonstrations are planned for Saturday in Soledad and Watsonville.

A “Black Lives Matter, Soledad for George Floyd” march is scheduled for noon on Saturday at Vosti Park in Soledad, with the march taking place at 1pm.

At 1pm on Saturday in Watsonville in the Watsonville City Plaza there’s a “Justice for George Floyd, Remember the Children” event. A flyer promises food provided by the nonprofit Food Not Bombs, an open mic and local art.

A previously announced peaceful demonstration in Carmel has been cancelled, says City Administrator Chip Rerig. He says the Carmel City Council, city staff and Carmel Police were ready to welcome the student group from Monterey Peninsula College planning the event but was informed by students they changed their plans.

On Sunday, June 7, there is a protest planned at 9am, people are gathering in Salinas at the corner of South Main and East Blanco.

A protest in Pacific Grove at Lovers Point Park scheduled for Sunday afternoon at 1pm has also been cancelled.

New information is being added to this post as the Weekly becomes aware of it. Contact news@mcweekly.com if you have any information to add.

Does anyone know who is organizing this march in Soledad? The flyer has no information on the organizers of this protest.

The Governor, County Dept. of Health Director, Law Enforcement, DA have shown leniency to First Amendment Rights for Black Lives Matter yet enforced their executive orders towards Restaurants, Churches, and Local Non-Essential Workers in a monopoly to cite caselaw and CDC, WHO guidelines on Covid-19. How can a restaurant or church have more than 100 people inside when people without the need for masks or 6 feet distance have shown no respect for other's health. Another issue is micro minority prejudiced choices to fund only Black Communities yet ignore the other minorities that make the melting pot of America. All minorities, colors, demographics accept the need to protest on the police brutality that has been hidden by public view for years by viewing George Floyd's lynching & death by cop. How ever can one demographic stand be one voice when all minorities have experienced this due to the consequences for the respect of the badge and humanity? Nothing but love for all colors but politics are micromanaging this but it is going on in corporations, film, music, sports, and online?

Because of qualified immunity, people in power can have sex on the casting couch and use citizens pulled over as punching bags to try out their MMA moves and then these same cops write books and get it published as you can find online pretending to change when they become teachers with that kind of past experience doing drugs, having sex, raping, getting a cut on drug deals while on the tax payer's dime on the job disrespecting the badge. Now these same people in power are still misusing their power by preventing people from life by one sided science based on political martial law and these riots have proven that herd immunity and civil disobedience are the answer for the health dept. and governor to rescind their executive orders that are prejudice towards religious non-essentials and small businesses instead of the big corporations doing the same thing to keep financially healthy. Now who's prejudiced now under the First Amendment using a new version of the Flu as a cover up to change the laws then the revolution began. Trump is true to his word but Biden is covering up his racial slurs and womanizing that are found on news feeds that are backed up as fact.

The District Attorney and "Health Director" said the demonstrators could do as they please and not worry about any of the house arrest stuff. You see, they are exercising their First Amendment rights. But the "health director" has prevented people gathering to pray all this time. What bullshit. They need to end the house arrest before it is ended for them.

There's another demonstration on Friday in Monterey at the Custom House Plaza, 2-5 pm. "Enough is Enough: Join Us To Help Peacefully Spread Awareness for Those Who Have Lost Their Lives To Police Brutality" says the flyer. Everyone is asked to wear masks and bring signs.