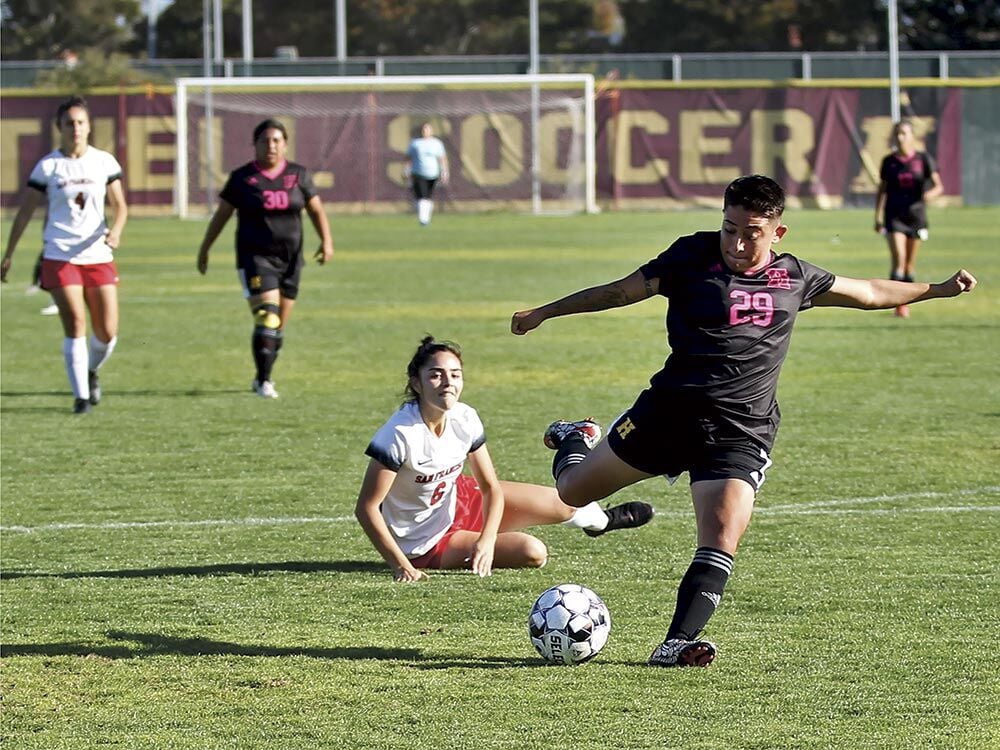 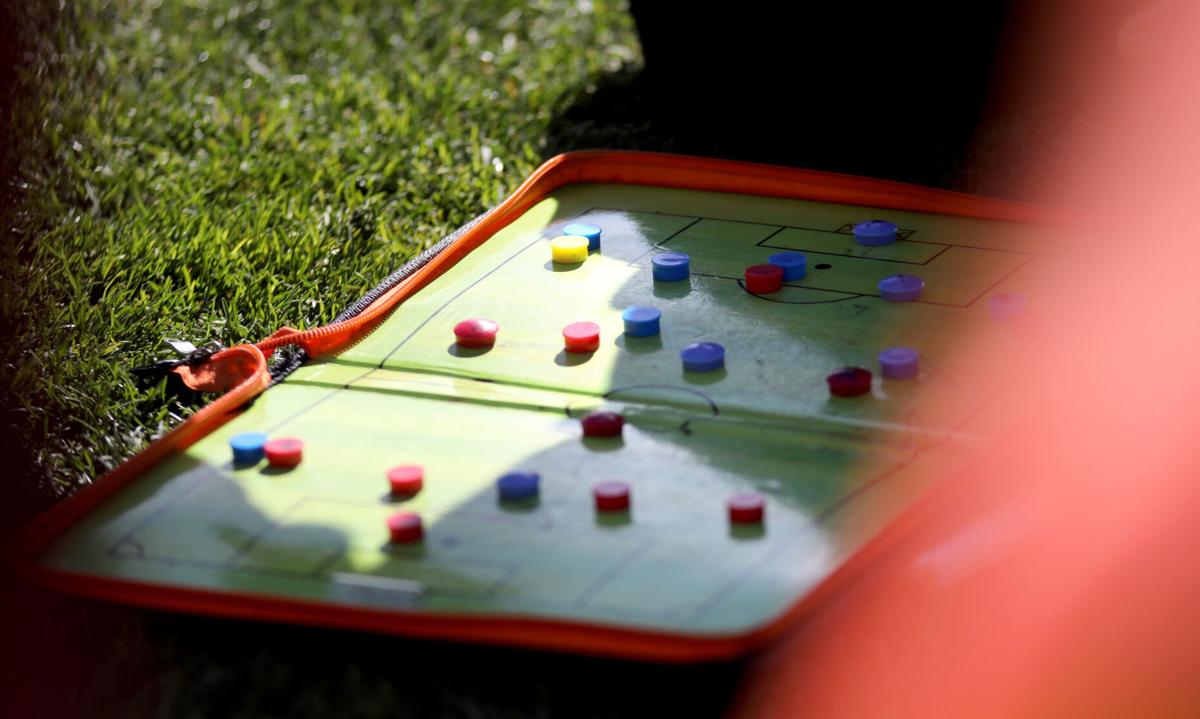 A play board with markers showing the Hartnell Men’S soccer team plays on the ground. 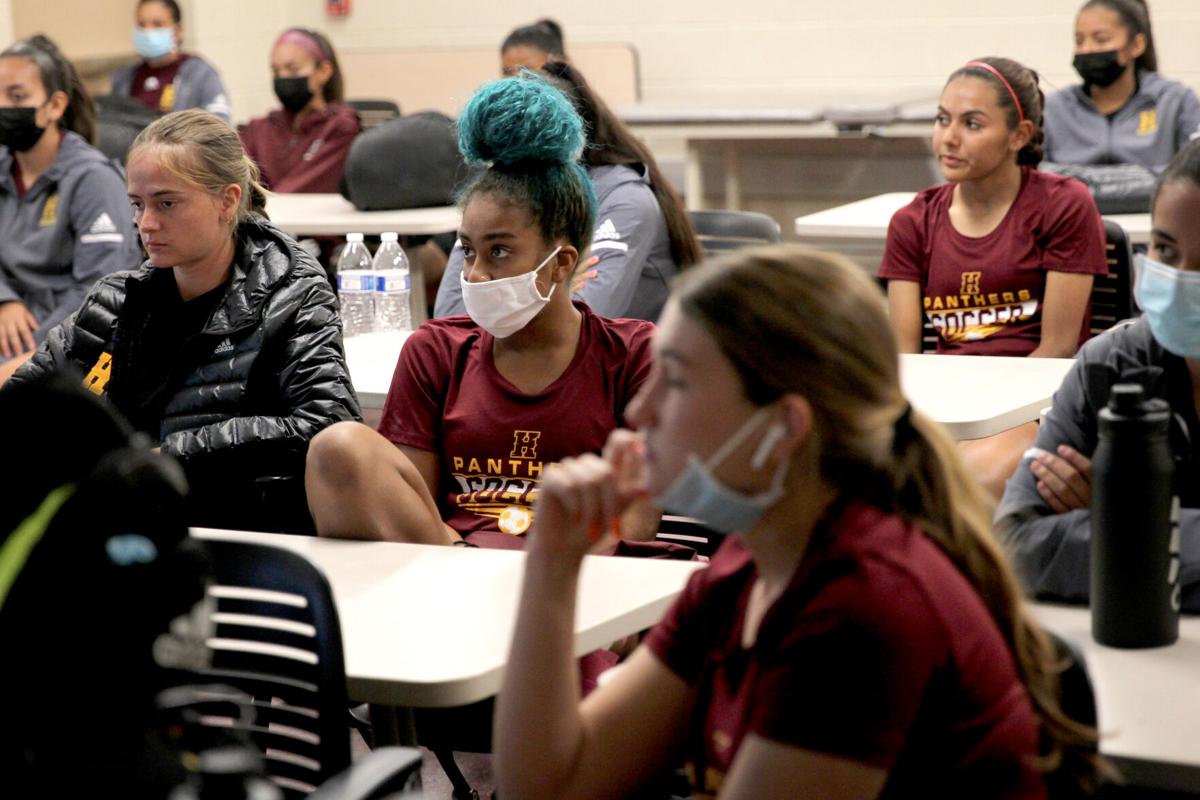 Hartnell women’s soccer team listens to the pre-game scouting report before heading out to the field. 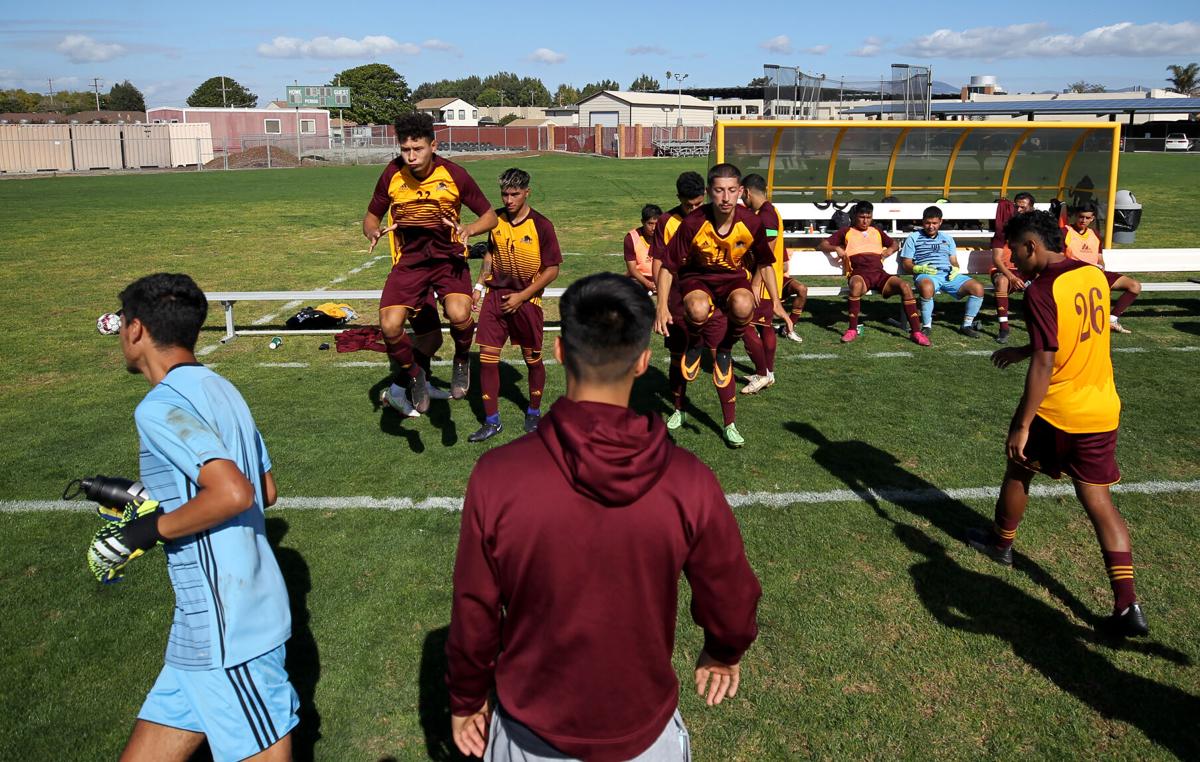 Hartnell Men’s soccer team warms up before heading out for the second half. 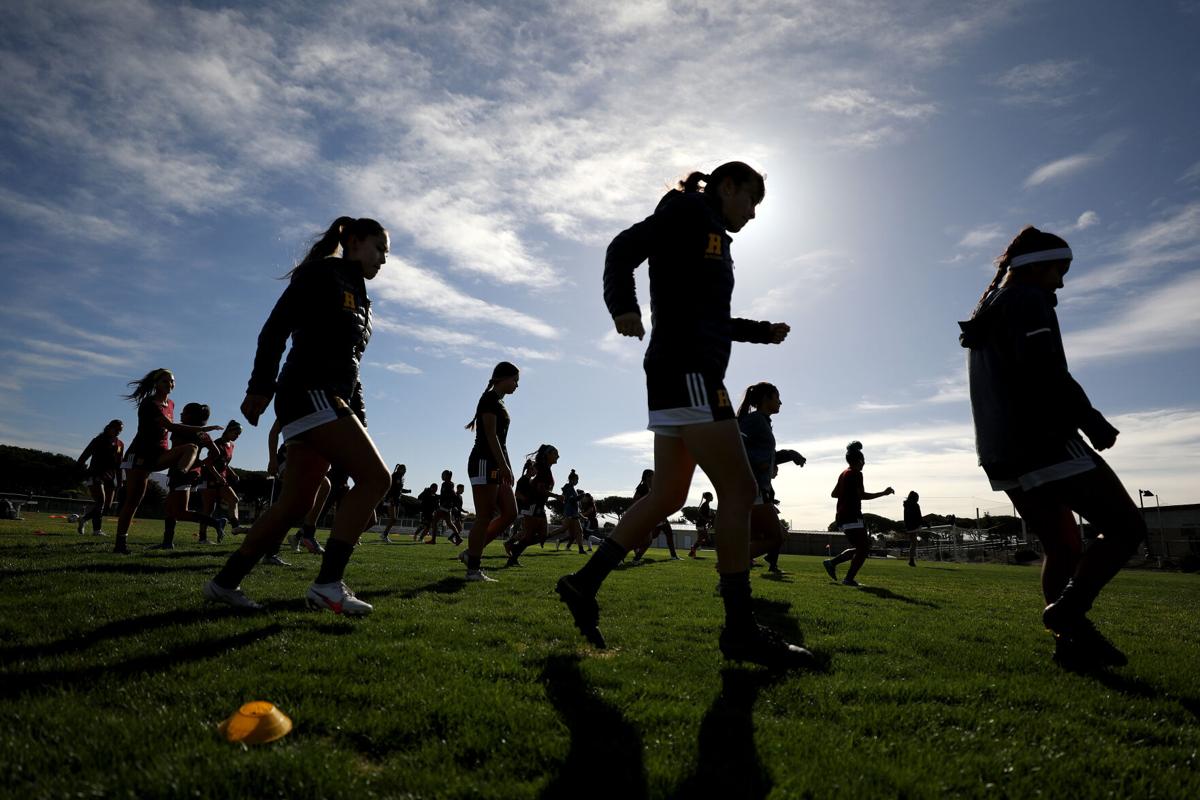 Hartnell women’s soccer team warms up before an important game against San Fransisco. 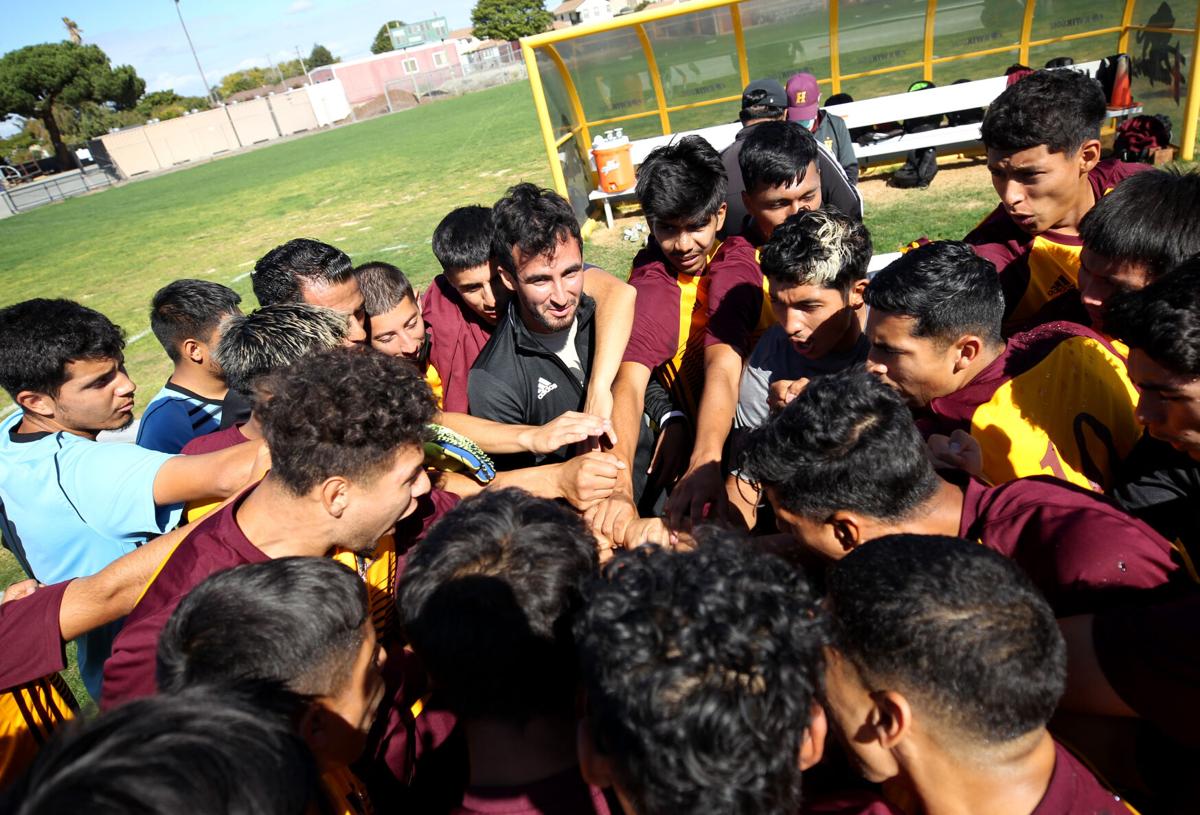 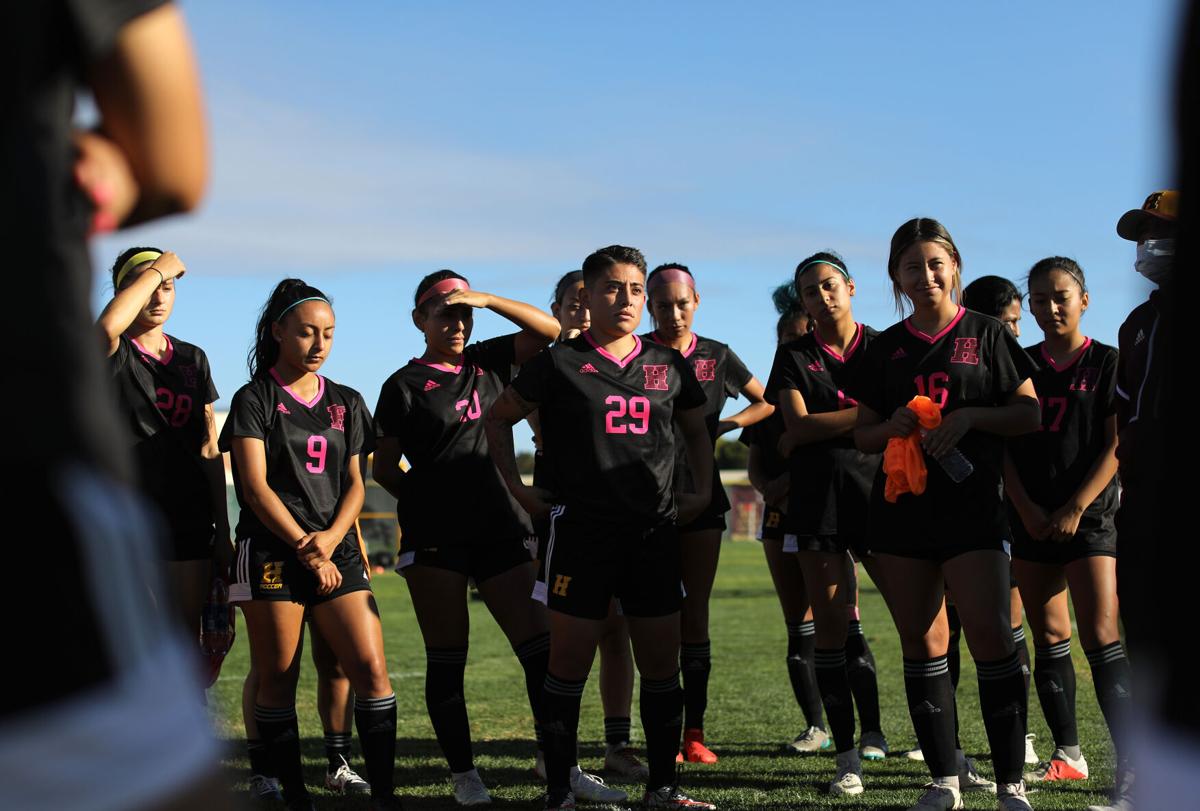 Hartnell women’s soccer team listens to their coach just before a game. 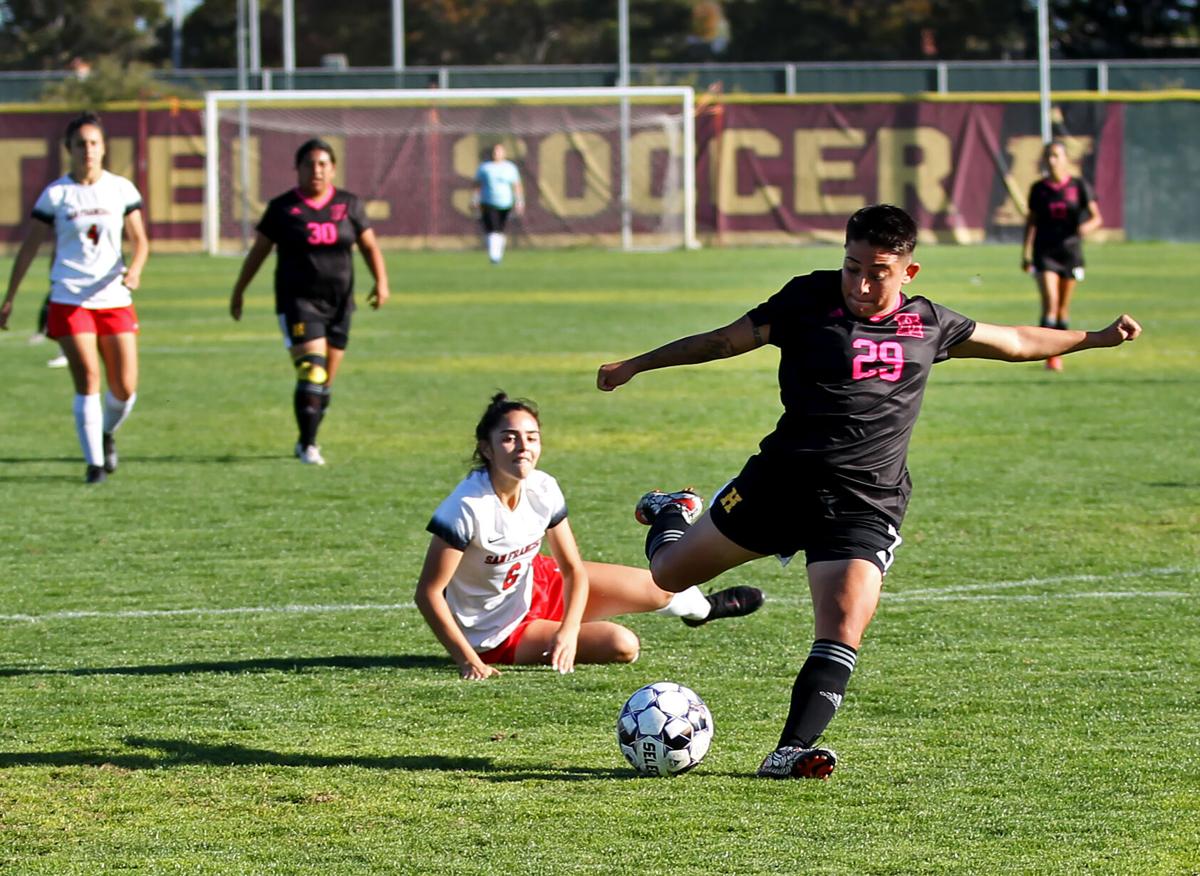 Hartnell women’s players Belinda Ascencio shoots and scores to get the scoring started in a 2-0 win over San Francisco. 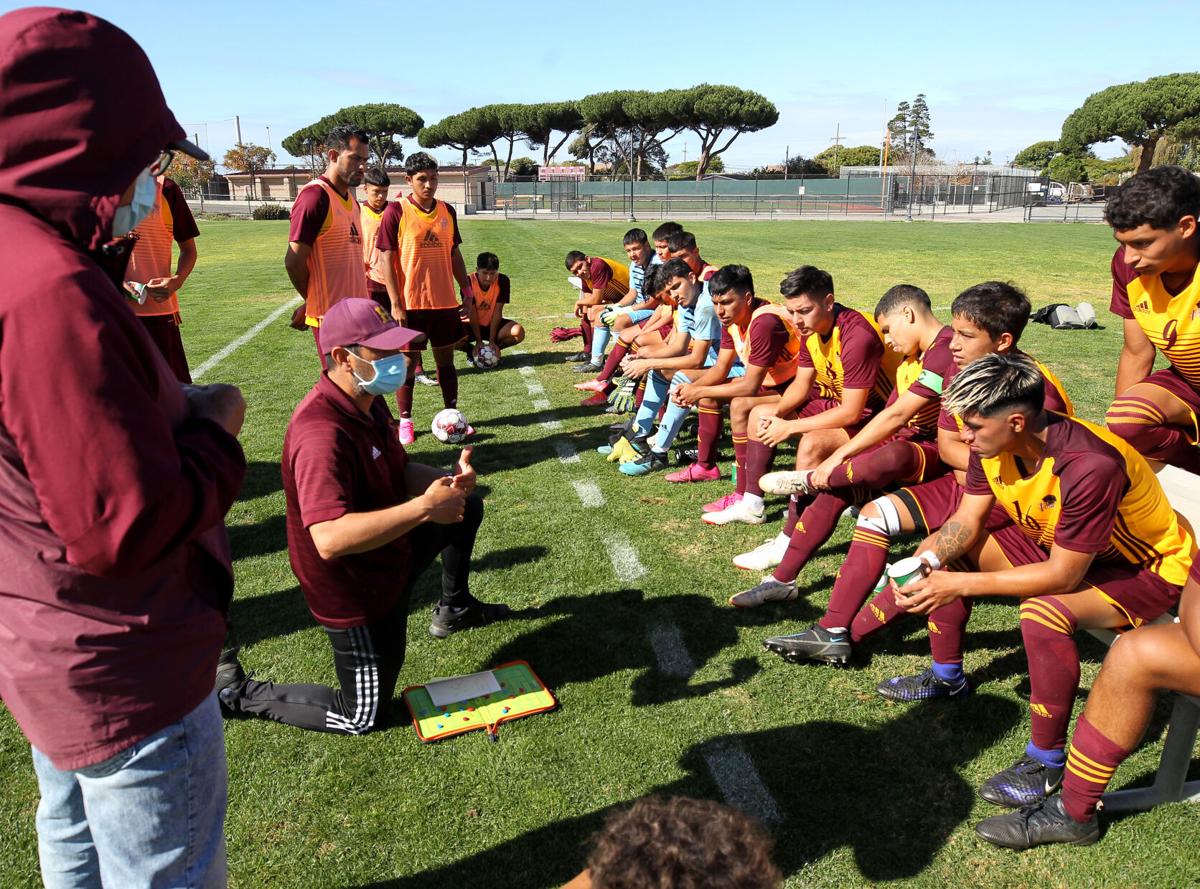 Hartnell’s men’s soccer coach Daniel Ortega speaks with his team during the half during a 7-0 win over Ohlone College. 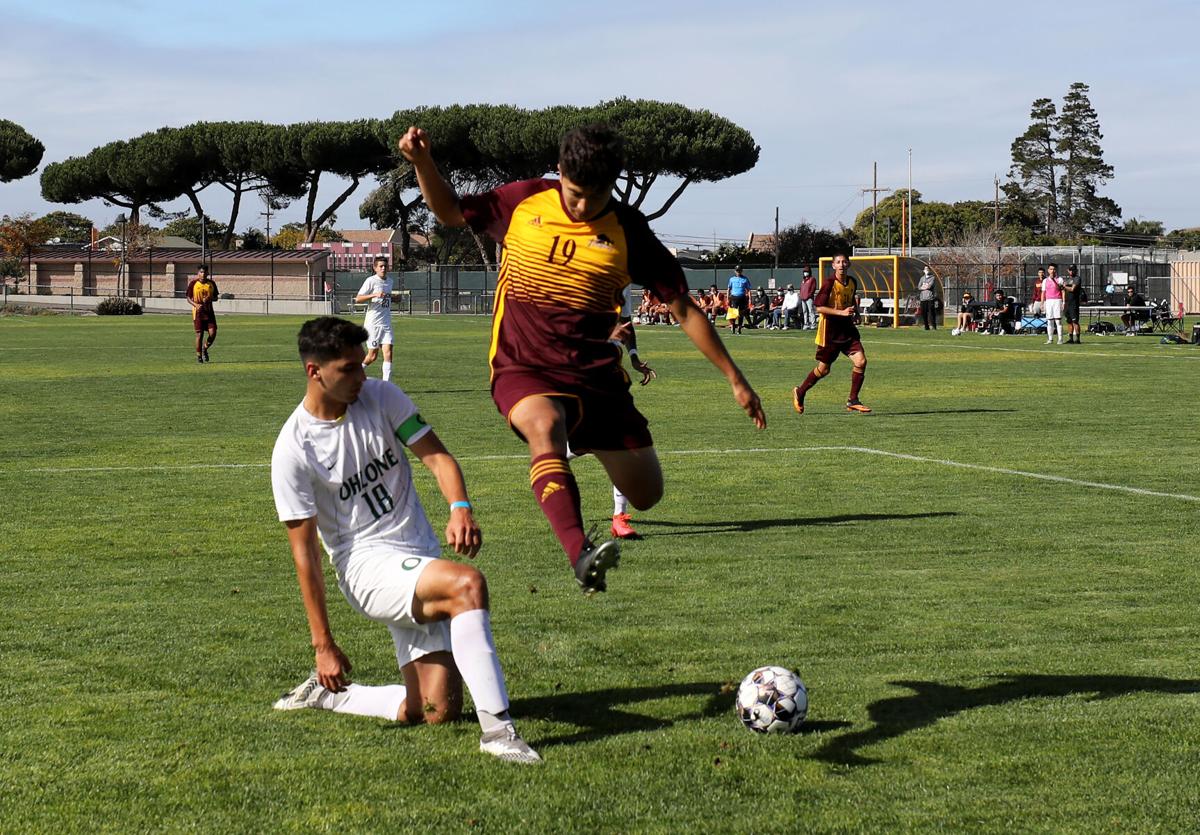 Hartnell’s men’s Felipe Torres(19) gets the ball taken away from him in a 7-0 win over Ohlone College. 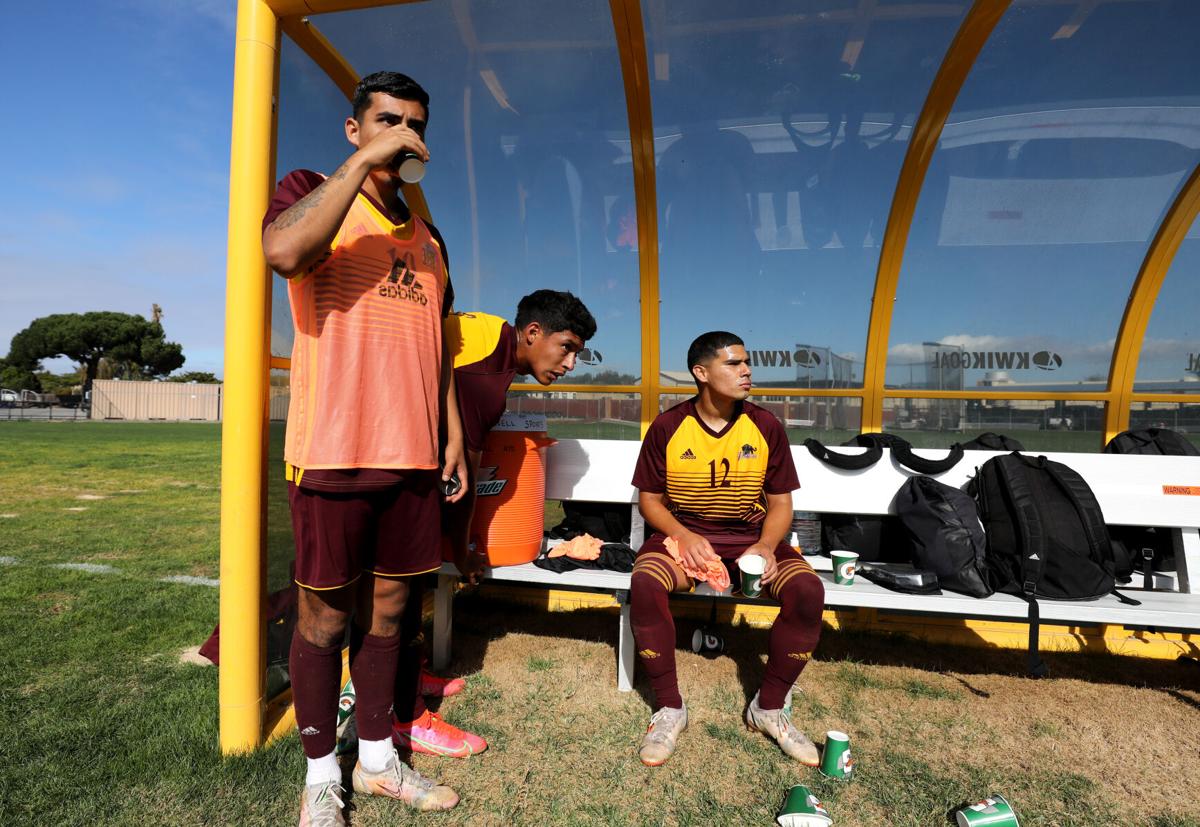 Hartnell’s men’s soccer grab some water in a 7-0 win over Ohlone College. 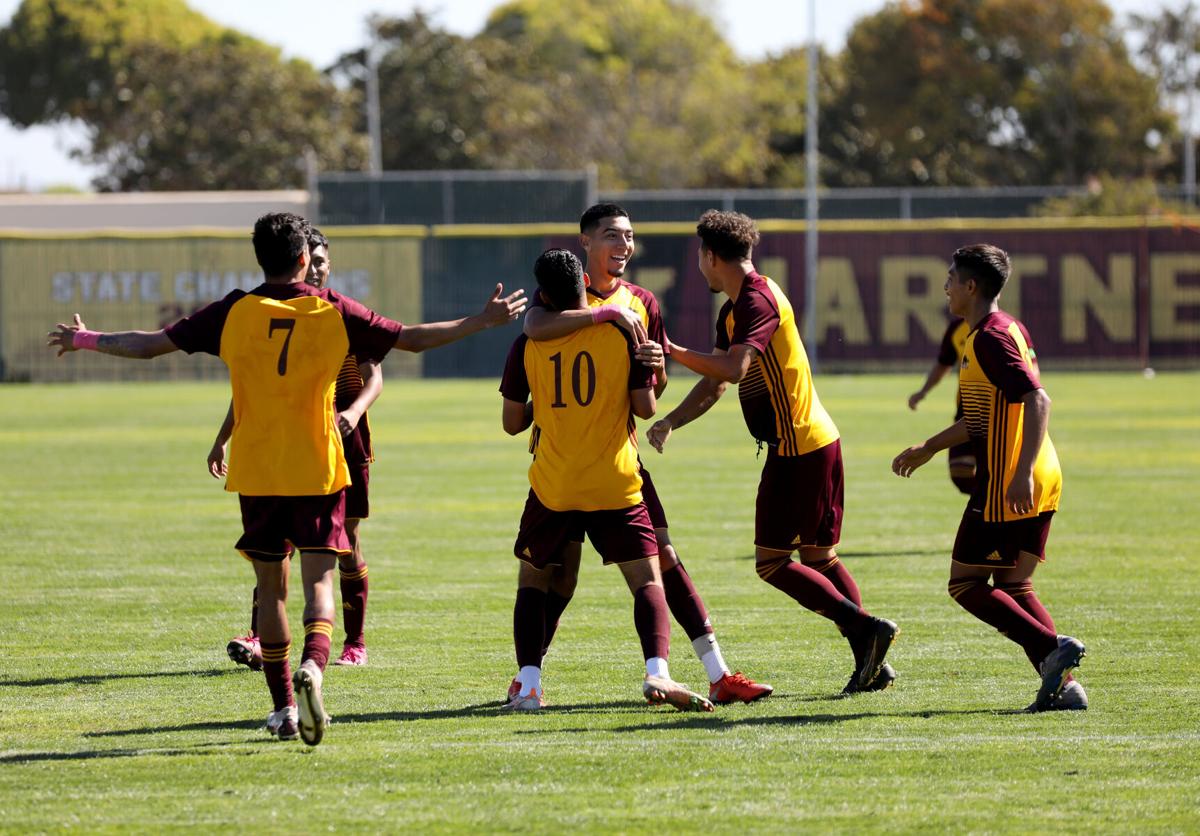 Hartnell’s men’s soccer team celebrates after a goal in a 7-0 win over Ohlone College. 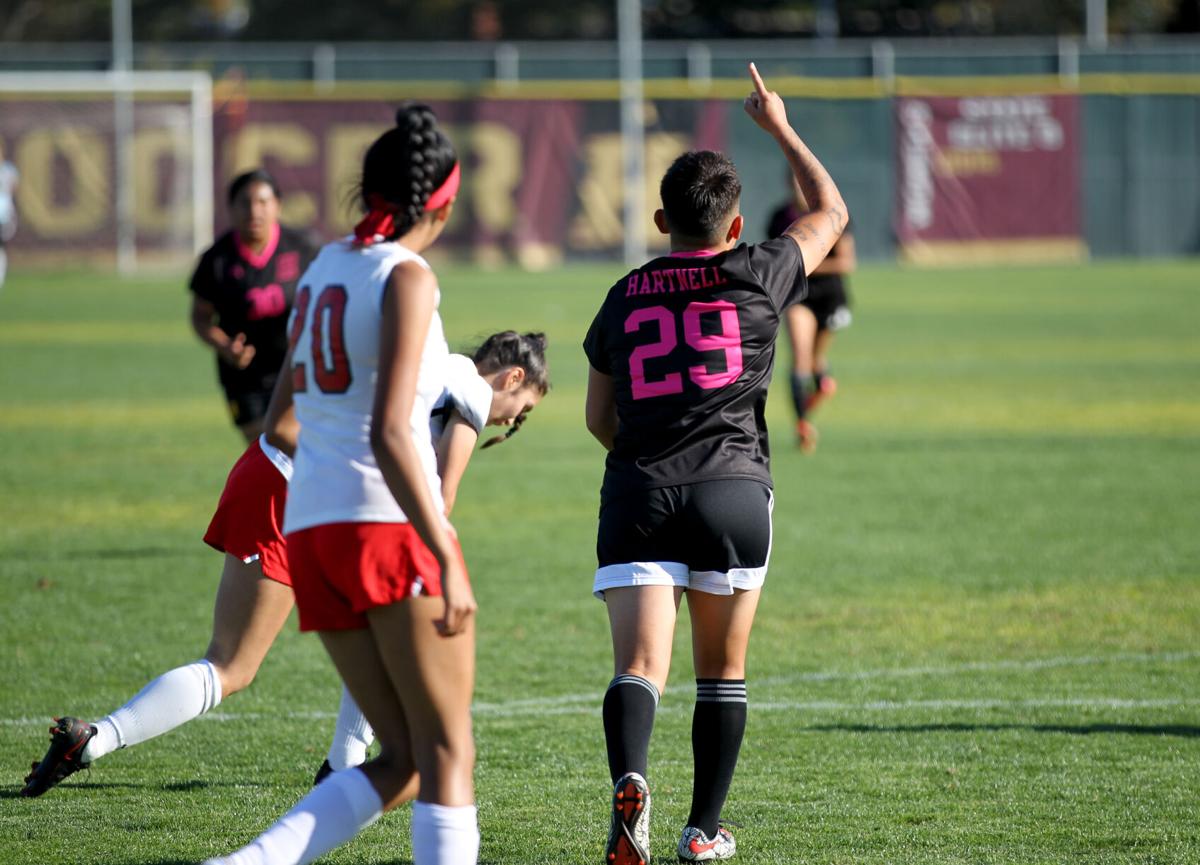 A play board with markers showing the Hartnell Men’S soccer team plays on the ground.

Hartnell women’s soccer team listens to the pre-game scouting report before heading out to the field.

Hartnell Men’s soccer team warms up before heading out for the second half.

Hartnell women’s soccer team warms up before an important game against San Fransisco.

Hartnell women’s soccer team listens to their coach just before a game.

Hartnell women’s players Belinda Ascencio shoots and scores to get the scoring started in a 2-0 win over San Francisco.

Hartnell’s men’s soccer coach Daniel Ortega speaks with his team during the half during a 7-0 win over Ohlone College.

Hartnell’s men’s Felipe Torres(19) gets the ball taken away from him in a 7-0 win over Ohlone College.

Hartnell’s men’s soccer grab some water in a 7-0 win over Ohlone College.

Hartnell’s men’s soccer team celebrates after a goal in a 7-0 win over Ohlone College.

ON A CLOUDY FRIDAY AFTERNOON AFTER AN EARLY-SEASON RAIN, THE HARTNELL SOCCER FIELD’S SURFACE IS SLICK. The scoreboard isn’t working, adding to the tension of a game that is a hard-fought stalemate. The Hartnell Panthers, ranked second in the state, are facing off against the Foothill Owls from Los Altos Hills, ranked first.

After several attempts on goal, including a shot by midfielder Isaac Lomeli that hits the crossbar, the Panthers stay with it. Eventually, a corner kick lands the ball in front of the Owls’ goal, where both teams fight to get control. Freshman defender Luis Politron gets a good angle, makes contact, and the ball zips through defenders and past the goalkeeper, into the left side of the net. Politron has scored the first goal of the game, at minute 86.

But the tension isn’t over – four minutes later, Foothill scores. The game ends 1-1.

Persistence is part of what a team trains for. But the hard work for these players was made even more difficult this season. It took a little longer than normal to get into good physical condition after a hiatus due to the Covid-19 pandemic. During shelter-in-place, the Hartnell men’s and women’s soccer teams had Zoom meetings and home workouts. Now they’re back on the field and together in person – and exceeding expectations.

The men’s team has won five Coast Conference titles and has made it to playoffs consistently over the past decade. In 2013, the Hartnell Panthers won their first state title, upsetting Mount San Antonio College based in Walnut, California, which had four consecutive championships.

“Besides Fresno, we’re the only team from the North [Northern California region of the CCCAA] to ever win a state title in the last 10 years,” says Daniel Ortega, the men’s head coach. “We’ve been traditionally a strong team.”

But this year, being a strong team was not easy. Being a community college student-athlete isn’t easy, either. They have to be full-time students, keep passing grades, attend practice and dedicate at least 10 hours of their time for practice and games. Several players work part-time or take care of family members. Fulfilling all these tasks takes focus, dedication and time management skills.

Anthony Rangel, a sophomore forward, is taking all his classes online this year. He helps care for his younger siblings, plays soccer, studies and commutes every day from his home in King City to Salinas for practice. He’s happy to be back on the pitch: “I’m really excited that we get to play in front of people and show them what we can do,” Rangel says.

Ramiro Vasquez, a sophomore midfielder and the men’s team captain, has been in the U.S. for four years. He is still striving to improve his English every day and he works part-time to support himself while attending school and playing soccer. His cousin, Lorenzo Vasquez, was on the team that won the 2013 championship, and Vasquez also wants to win the state title.

The team had a seven-game winning streak when they lost 1-0 against De Anza College on Sept. 28. “It was a hard blow,” Vasquez says in Spanish.

But that loss made them realize they needed to work harder and get better. Since then, the team has won seven games and tied twice.

THE HARTNELL WOMEN’S TEAM WAS REBUILT OVER THE PAST DECADE AND IN 2016 WON THEIR FIRST CONFERENCE TITLE. In 2018, they advanced to the quarterfinals. When head coach Ivan Guerrero came on board in 2011, they had just enough players to fill the roster for games. Now, they list over 30 players. “It’s a very good feeling knowing there is much interest,” Guerrero says. Early on, he questioned whether he was the best coach to lead the team. But his work paid off: In 2014 the team went to the playoffs for the first time since 2002.

Belinda Ascencio, a sophomore forward from Soledad, is a powerful player who stands out on the field; she’s fast and has exceptional ball control. She is one of the highest scorers on the team with 12 goals. “Growing up, there was really no girls soccer team,” she says. “I grew up playing with boys.”

Ascencio is now one of the most experienced players and helps her teammates, including her younger sister Monique Gonzales, a freshman defender. A lot of that goes beyond soccer, she says, and is part of a spirit of mentorship inspired by Guerrero. “A lot of coaches focus their players’ mentality to just be soccer, soccer, soccer,” Ascencio says. “With Coach Ivan, I learned to be a great person on and off the field.”

Players and coaches say their success is not all about soccer drills. Team members have to meet minimum grade requirements (the state standard is a 2.0 GPA, but the women’s team requires a 2.75 minimum; the team average is above 3.0). Having a good GPA increases the chances of getting a transfer scholarship. According to a 2014-2015 report citing data from the National Center for Education Statistics, Hartnell’s student-athletes have a 67-percent transfer success rate and 80-percent retention rate, above the college’s average 10-percent transfer rate and 75-percent retention rate.

The men hold a team study hall twice a week before practice, where players do homework or tutor each other and the coaches supervise. Their grades are checked at least once a month, and if anyone is failing a class or drops below the minimum requirement, they must sit out a game. “Without academics, they can’t play,” Guerrero says. “It’s that simple.”

RANGEL, VASQUEZ AND ASCENCIO ALL STARTED PLAYING SOCCER AT A YOUNG AGE. This wasn’t the case for Jada Taylor, a sophomore defender and captain of the women’s team. Taylor grew up in Hollister and got interested in soccer when she was 10, relatively late compared to her Hartnell teammates. “I tried it out and I ended up falling in love with it,” she says.

Both coaches say one of the key elements to their success is recruiting players locally. Many players already know each other. “We believe in the local talent,” Guerrero says. “We want to make sure they know this is their team.”

This community feeling extends to the stands, too. Many of the fans are family members, fellow athletes and players’ boyfriends or girlfriends. They attend games regularly and watch from the grass or bleachers. Some even bring their own chairs. Parents shout commands to their kids in Spanish: “Block her!” and “Hurry up, hurry up!” every time their son or daughter is in the spotlight. The men’s and women’s teams also watch and cheer for each other – a sportsmanship practice to show support to their fellow athletes.