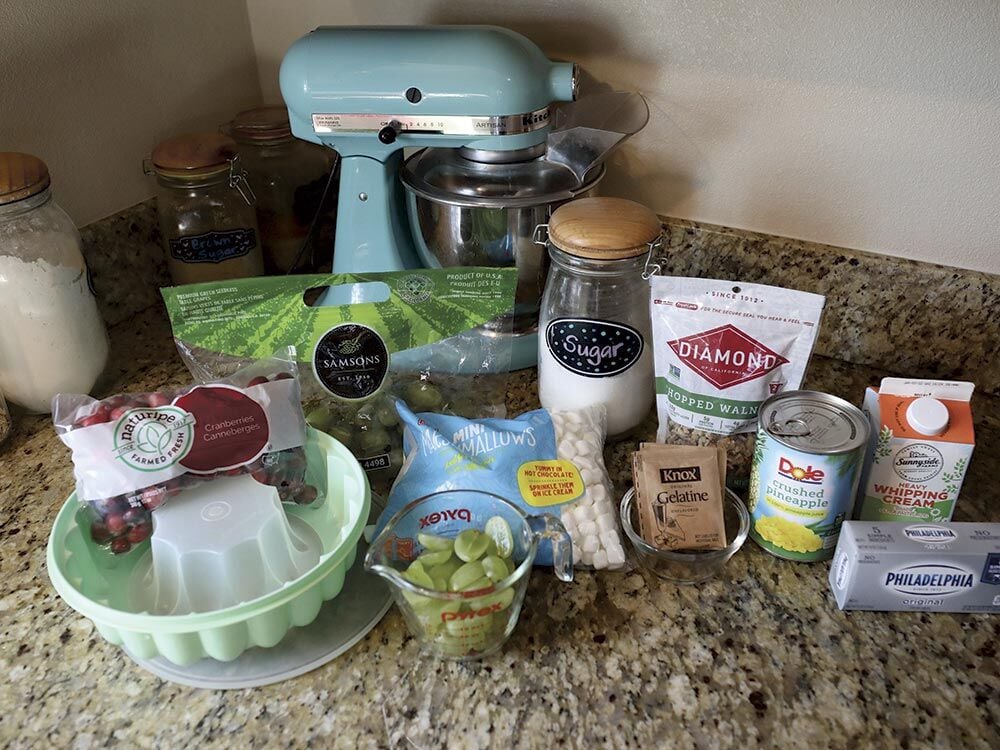 Even though there are nine ingredients in Grandpa Simi’s cranberry mold, the preparation is simple and quick – minus the overnight softening of the topping ingredients. 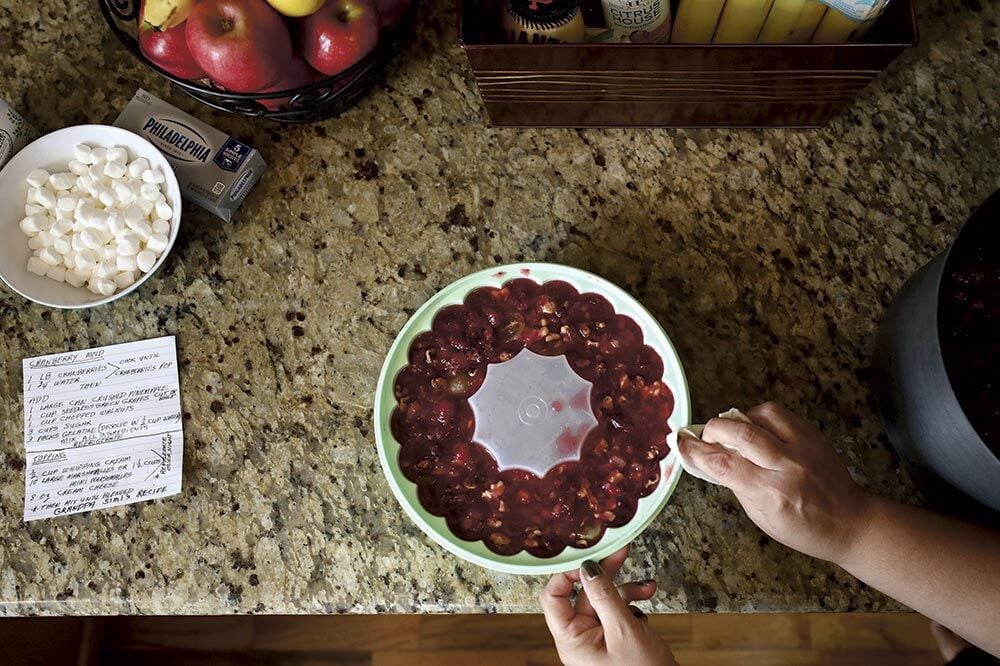 Preparing a dish in a gelatin mold offers home cooks something nearly impossible to attain otherwise: a dish that comes out in a perfectly symmetrical, geometric shape. And possibilities for what that shape is are only limited by what kinds of molds a home cook can find. 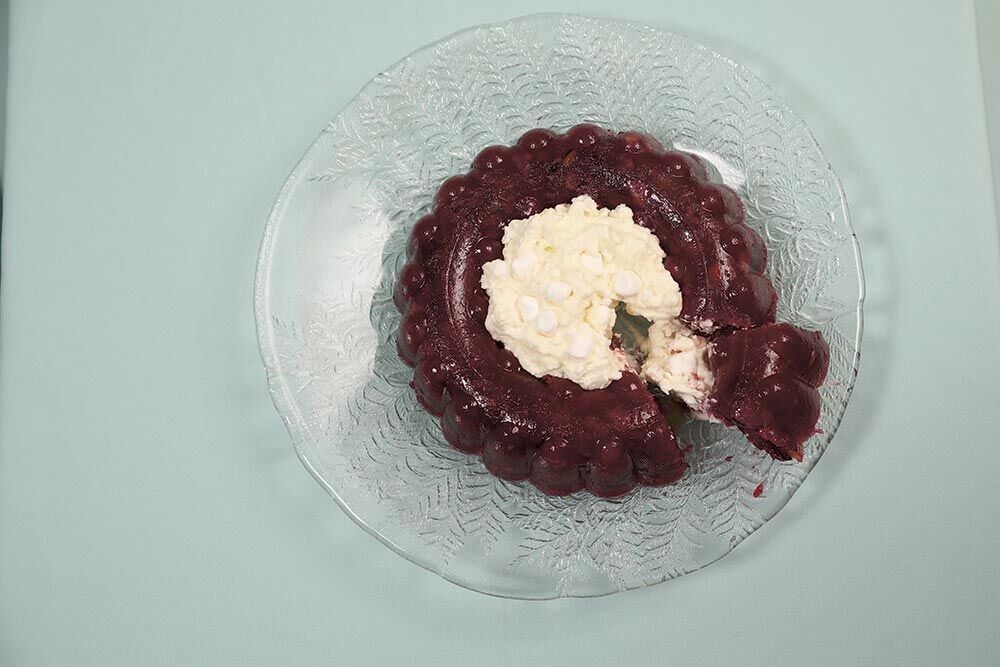 Though there is no crust, you can slice and serve the cranberry mold like pie – except you put it on a plate with the turkey, not after.

Balls of salt cod, a ring of Jell-O, ricotta cookies - - it’s time to whip up some family favorites.

Let’s consider, for a moment, the concepts of local and seasonal when it comes to dining.

We might be inclined to assume the obvious – that local refers to the gardens, farms, ranches and waterways within, say, 100 miles. Seasonal? Well, that’s a reference to the time of year. Travel to Germany in the spring and you will find white asparagus on every plate. Have a friend with a small plot and late summer brings knocks on the door and sacks of zucchini.

But local can be more precise – a family table, perhaps. And seasonal becomes the day of the week or time of year when everyone (mostly) looks forward to a favorite dish, passed down through generations. Maybe it’s a regional thing, like bolinhos de bacalhau (find out more below). Perhaps it belongs to a period of time – the Jell-O mold gracing the cover of this week’s issue, for example.

We present four recipes that express this definition of local and seasonal.

FOR MOST AMERICAN ADULTS UNDER A CERTAIN AGE, THE LAST TIME THEY HAD JELL-O WAS PROBABLY IN THEIR 20S, AND THERE WAS PROBABLY ALCOHOL INVOLVED. Those same adults have probably all seen pictures of Jell-O plates from the 1950s – the pinnacle of the squishy dish’s popularity – and asked themselves: How was this food ever so popular with… grown-ups? And perhaps: Why are there tomato and cucumber slices in that Jell-O? And wait, is that tuna? What is happening?

In her piece titled “A Social History of Jell-O Salad: The Rise and Fall of an American Icon,” writer Sarah Grey provides some interesting context: In medieval Europe, when gelatin was extremely expensive because it was so labor-intensive to render from bones, jellied foods were only eaten by the rich. Had the brand name existed at the time, Marie Antoinette might have said: “Let them eat Jell-O.”

The same was true in the American colonies, both in New York high society or Southern slave plantations; Thomas Jefferson, at his Monticello plantation, reportedly served guests wine jelly – the original Jell-O shot.

As gelatin became much cheaper to manufacture with the advent of the Industrial Revolution, it became accessible to the masses, and early Jell-O marketing efforts highlighted that every household could now eat the same food as the rich.

Sales were brisk in between the two world wars – Jell-O released a cookbook in 1935 devoted exclusively to recipes with its new flavor, lime – and come mid-century, housewives reportedly favored it for its no-mess cleanliness, affordability, ease of use and because it was considered classy.

And while gelatin-based dishes, particularly savory ones, have fallen out of fashion in the decades since, perhaps the reports of their death have been greatly exaggerated.

Sandy DiMaggio, who grew up in Seaside and now lives in Monterey, serves a cranberry-filled gelatin mold every year at her family’s Thanksgiving.

“It is so good,” she says, adding, “It’s just something that I think we all just expect on Thanksgiving.”

DiMaggio, 78, has been eating it since childhood when her dad – who she says was the chef of the household – started serving it at their Thanksgiving feasts. DiMaggio has no idea where her father got the recipe for the dish, but it became an instant classic in the household. “[It] was one of the highlights of the turkey dinner,” she says.

DiMaggio’s nephew, Seaside resident Mike Fowler, admits that for years he wouldn’t touch the dish – “I wanted nothing to do with it,” he says – despite the fact that “everyone raved about it.” But he opened his mind and finally tried it about eight years ago and saw what all the fuss was about. “It’s bomb,” he says. “That palate-cleansing sweet just adds great balance, it goes really well with Thanksgiving dinner.” Fowler says it could be eaten as a dessert, but in his family, it goes on the plate with the holiday’s savory staples: turkey, mashed potatoes and stuffing. “It complements everything else,” he says.

DiMaggio says the dish, which she simply calls a cranberry mold, also makes great leftovers that keep for up to five days. She always makes extra for that reason, so that she uses it in sandwiches with leftover turkey and stuffing. “It is so good,” she says.

The preparation is simple enough (see the recipe below). DiMaggio cooks fresh cranberries until they pop – “More elegant than canned cranberries,” she says – and then mixes them into dissolved gelatin with crushed pineapple, seedless green grapes, walnuts and sugar, then finally pours it into a mold until it sets.

Separately, she makes a mixture of whipping cream, cream cheese and marshmallows and lets it soften overnight in the fridge. Then she mixes that all up the next day and then uses it to fill the hole in the center of the mold. “It looks beautiful,” she says.

DiMaggio made some in advance of this year’s holiday, which many at the Weekly were able to sample on its own, without all the other mainstays of a Thanksgiving plate. The consensus: It is excellent, better than one might expect, with the walnuts providing a nice contrast in texture, while the cream cheese-based filling helps cut the sweetness. And put on a Thanksgiving table, or in a leftover turkey sandwich, one can imagine it being even better.

DiMaggio has been the family member making it for years, but Fowler says he and his wife Rebecca hope to have a “coaching session” with DiMaggio soon that they can carry on the tradition for at least another generation.

“I would hate for her to pass the baton and for me to not get it right,” Fowler says.

Cook 1 lb. fresh cranberries in 1-3/4 cups water until the berries pop. Then add:

Mix all ingredients, pour into mold and refrigerate until it sets.

For topping: In a bowl, put:

Put in refrigerator to soften overnight. When softened, mix the ingredients and add the topping to the center of the mold.