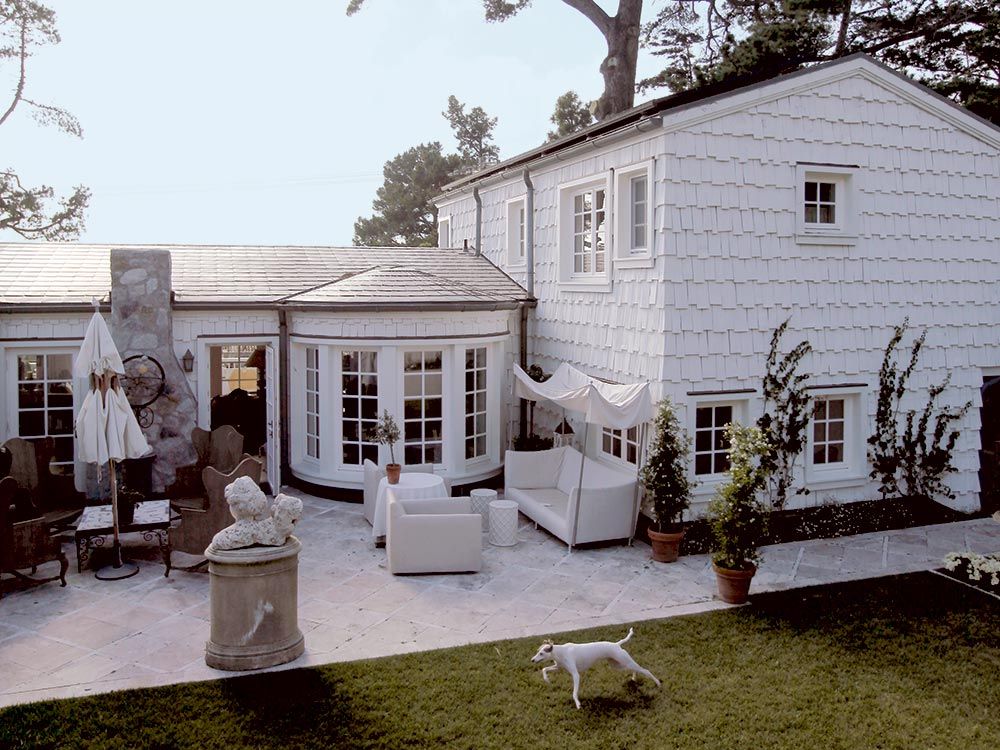 A look at the brand-new backyard at Carmelo and Ocean, which was a long time coming. “When we advocated for green practices in 1999,” Hayward says, “people literally thought we were crazy.” 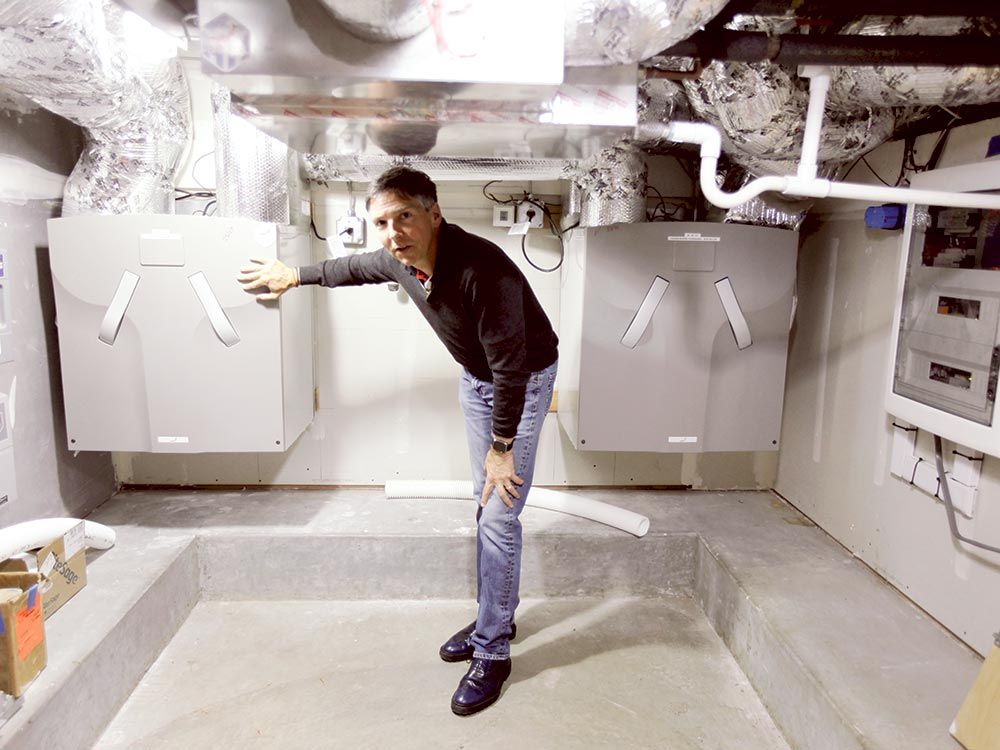 Bill Hayward grew up driving forklifts and doing cashier sales for the four-generation family biz. Now he’s touting home air systems like the one in his basement.

Bill Hayward and his family lived in the big and fancy sort of Pebble Beach home afforded by the success of his now-eight Hayward Lumber outposts, including the headquarters/store in Pacific Grove.

Something seemed to affect the whole family. His wife had sinus infections, a foggy memory and rampant congestion. He was so depressed and tired he took two-hour naps at work and still went to sleep at 7pm. But it was seeing the 6-month-old Delphinia so unhealthy she stayed the same size for months – dropping from the 90th percentile on height and weight to 9th – that was too much to tolerate.

“It was scary, but we turned it into something transformational,” Bill Hayward says. “Now we want to provide the tools for anybody who wants the help.”

Today Delphinia is 8, and one of five kids (and three Italian greyhounds) in the house. The family’s toxic discovery led to some 2,000 hours of research by the Hayward Healthy Home Institute (that’s available to the public) and to a new 3,400-square-foot home in Carmel, a first of its kind. The principles it puts into practice offer a literal breath of fresh air to a sickened side of an industry. They also made Hayward the buzz of the construction world, landing him on the cover of Lumber/Building Material Journal as Entrepreneur of the Year.

Talk with him for more than a few minutes, and you’re unlikely to look at your home the same way. That’s largely because – as he layers you with Environmental Protection Agency statistics or describes a complex passive heat system simply – he tunes into all the stuff happening that you can’t see, mold and moisture among them.

“You’ve got a closet on the far wall of your master bath, away from the shower,” he riffs at one point, “but it’s 4 degrees colder there, so that’s where the steam goes, and why things are growing in a surprising place.”

The findings his family made at the Pebble Beach house – where a damp deck provided a mold highway into the foundation and walls – are eerily common. A special legislative committee on indoor air pollution in Massachusetts found indoor air pollution accounts for up to 50 percent of all illnesses way back in 1989. Today EPA reports indoor air quality is a top five environmental risk to public health. Indoor environments can be six times more polluted than outside.

A Hayward-commissioned cross-demographic Survey Monkey questionnaire circulated to 680 people nationally revealed 47 percent suspect their house is affecting their health. Hayward likes to point out 90 percent of sinus infection are fungal, and that when he shares his story, many people furnish their own.

“If you check with many of those people,” he says, “they have a crawl space, live on a damp lot or have had a water leak.”

The point there: Homes are living, even breathing, things. When all the doors and windows in a house are closed, he asks, where does the air you breathe come from? The answer isn’t pretty: through cracks in the floor, compromised walls, windows and other joints, often from adjoining crawl spaces loaded with dirt, insulation particulate and more.

Given that, the fourth-generation business owner was astonished that, as he likes to say, “Fresh air was an innovation in homebuilding.”

“The ways that homes can affect people’s health and well being is more significant than most realize because there’s no much information out there,” he says. “It’s not considered a topic. It’s undiscussed.”

Hayward was the first in the U.S. to stock and sell Forest Stewardship Council-certified lumber. He was also an early Tesla adopter (and also owns a 1951 London taxi). So it’s not surprising he sees opportunity here.

“I’m focused on beyond green,” he says. “How do you build a home that positively impacts human health?”

A tour of his home reveals a diversity of devices that operate on his four principles for a healthy home: 1) continuous fresh air; 2) proper seals and insulation; 3) minimal toxic materials; and 4) cleanable surfaces.

Carpet and wood, which can hold many problematic particles and grime, are nowhere to be seen. Electrochromatic windows adjust tint to manage heat transfer. Zinc roof tiles draw morning dew that flows to an irrigation tank under the driveway. Radiant heat ceilings prove much more efficient than radiant floors. A seven-kilowatt solar array powers the house. The air-flow management system, meanwhile, provides noticeably fresher air by drawing in air from the outside, micro-filtering it, and passively warming it. Its exhaust valves pull out stale air at strategic spots, replenishing the house’s air completely every two hours.

Not coincidentally, 98-year-old Hayward Lumber has recently launched three new businesses, a radiant heating and cooling system mounted in the ceiling (Ahhm), a partnership to introduce those special tinted windows (with View) and fresh-air systems (Zehnder).

So while he and his family are breathing easier, it doesn’t mean the former forklift operator is working less intensely.

Weekly: How did you know conscious building was going to be such an important development?

Hayward: We started down that track in 1998. What was clear then: Customers asking questions about toxicity in building materials, sustainability and “Where does your lumber come from?” We thought the third was easy to address – we harvest and replant! Only we looked closer and found very good and very bad forestry.

When we discovered Forest Stewardship Council certified lumber, Hayward was first in the country to stock and sell it. It took a while to take but today $50 billion of wood and paper is traded under the FSC label.

When I say mold, what’s the first thing that pops into you head?

People getting sick in houses. There’s a tremendous awareness shortage. The EPA tells us approximately 50 percent of homes have an indoor air problem because of mold or moisture.

The human nose is a great test. If you smell it, you have it. If you have a house with moisture problem, it cycles. We heat the home, warm air rises. Houses leak. Old houses leak all their air in 2 hours. Old air goes out, new air comes in. Through the crawl space. Through walls, bringing wet damp air through the walls. That has dust, dirt, particulate. If you’re next to golf courses, it has pesticides. It turns out that air inside the house infiltrates through walls and isn’t fresh air.

I understand you drive a Tesla. How does that fit with your personal and professional principles?

Sustainability is a core value for me. A low carbon footprint is important. I drove a Prius. I wanted to get the three-wheel Aptera, then Tesla came out. Now Hayward has four Toyota Hino hybrids that are [low-emission] commercial grade delivery trucks.

How do you characterize your primary customers?

I’d say 90 percent of our customer base are people getting paid for what they do, from national production operations to custom contractors to maintenance and pest control guys.

How do subdivisions like the Dunes or Monterey Downs come into play with what you do?

We like to ask, Is it being thoughtful of water? The population’s need for growth is there, but is the development efficient? I lean into the wind to build net zero and passive houses. I’ve helped a number of our customers plan net zero projects. By 2020 all new buildings have to be net zero.

What are the other next big eco trends?

As an early advocate for green, people literally thought we were crazy. I’m focused on beyond green, which is [Hayward] Healthy Home. How do you build a home that positively impacts human health?

Sustainability people like it but are not always willing to pay for it, but when something impacts their health, they are.

Ha. I particularly like the new temperature guns. Laser point to any surface. Turns out particularly useful with healthy homes, because moisture always goes warm to cold.

Where you have cold spots, you can have a problem with your wall – it’s the second law of thermodynamics, the same reason water forms on the outside of a glass with ice. Two major healthy home enemies: stale air and cold spots.

What would surprise people most about your industry?

What a great place it is to work. Our industry has been somewhat forgotten with the recession. Most of people who work in it love what they do. Because it’s still a handshake business.

At the end of the day you’re providing a roof over someone’s head, and you feel pretty good. Now the focus is to make it a healthy roof.

This year's Home and Garden issue features insight from two women who are decades-long players in the Monterey Peninsula's real estate market.…