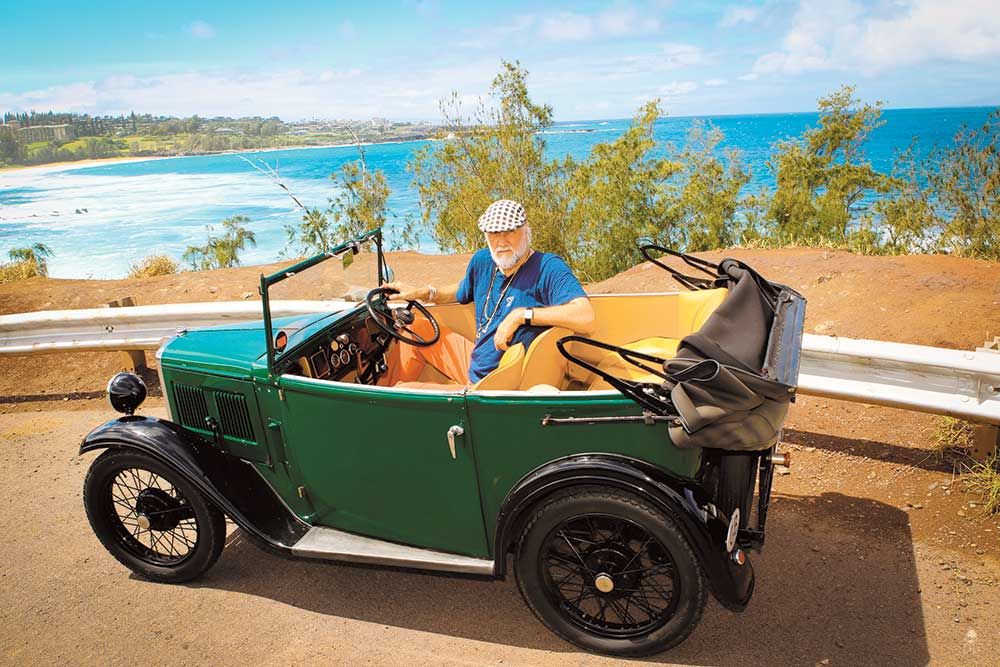 Fleetwood Mac founder and drummer Mick Fleetwood cruises a few times a week in his vintage Austin 7. It’s the car, Fleetwood says, he loves more than any other he’s ever owned. 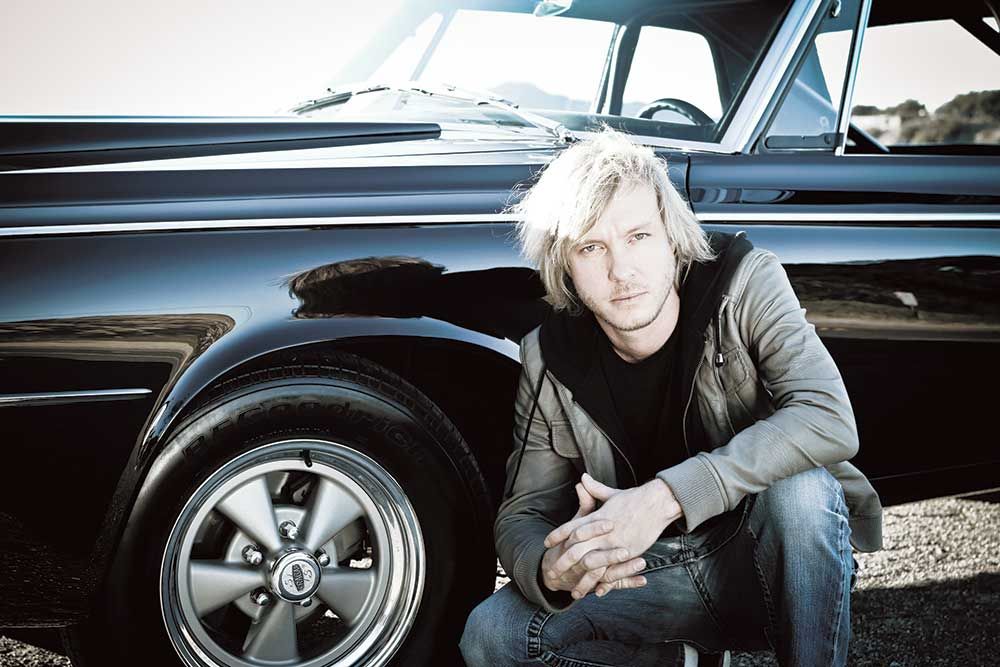 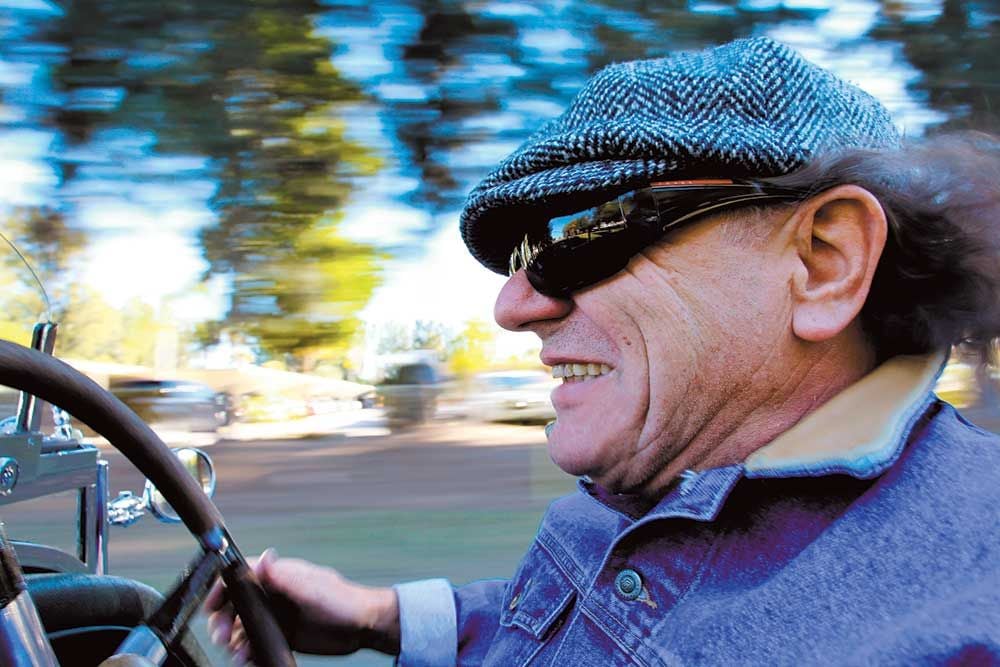 AC/DC’s Brian Johnson has the wind in his face and bugs in his teeth driving his vintage Bentley. 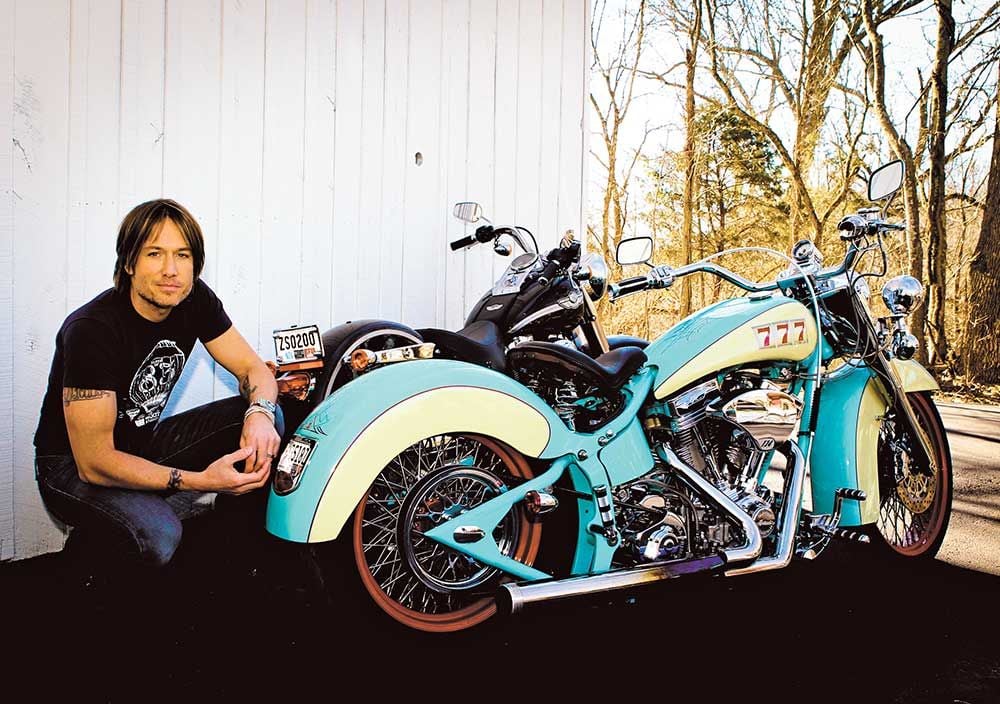 Australian-born and Nashville-based country superstar Keith Urban with his retro-styled Vengeance Drifter, which often accompanies him on tour. His favorite ride, though, is his ’72 Chevy pickup.

Photographer Michael Alan Ross straps into the back of a Mini Cooper in preparation to shoot AC/DC rocker Brian Johnson at the Road Atlanta race in Georgia.

Word came to Michael Alan Ross, as it often does, from a famous musician’s management team. You can have a few hours with Mick Fleetwood, they told him, and you can have it on this particular afternoon.

On the appointed day, Ross threw his cameras, gear and some clothes into a bag and hopped a flight to Maui. He intended to photograph Fleetwood in his natural habitat – at and around his home on the windward side of the Hawaiian Island, with the Fleetwood Mac founder and drummer cruising in his vintage Austin 7, for the book Ross was working on titled Rockin’’ Garages: Collecting, Racing & Riding with Rock’s Great Gearheads. Fleetwood had the Austin since the 1970s and he loved the car the most of any he’d ever owned, even more than the Jags, Ferraris and Porsches.

Fleetwood was a teen when he found the British Racing Green jalopy parked on a street in London; he was so entranced by it then, he left the owner a note saying he wanted to buy it if it was ever for sale. A few years later, when Fleetwood Mac had taken off and Fleetwood was making some real money, the call came that the owner was moving and needed to let the car go.

“The car gene exists in musicians and that’s why we’re susceptible,” Fleetwood writes in the book. “Think of the poetry and the romance of hearing about driving through Italy with your lover. I identified with that notion even when I had no money at all. I would go through hell; I would starve myself to make sure that my car that was burning oil would have oil in it… it was like having a dysfunctional lover.”

So with the clock running, Ross flew to Hawaii for the shoot. When you fly anywhere for a shoot, you’re at the mercy of a few things: the plane departing and landing on time; your bags arriving along with you, for example.

And if you’re shooting outdoors, you’re also at the mercy of the weather.

“I landed and the sky is black and I had this one opportunity, that afternoon, when Mick was going to be available,” Ross says. “I got to his house, punched in the gate code and the sky opens up. It’s a deluge. He literally looked at me and said, ‘You’ve come a long way for this,’ and then he looked at his assistant and said, ‘What do we really have tomorrow?’”

Fleetwood rearranged his schedule, put Ross up overnight and spent the next day with being photographed with the car he calls a part of his family.

Despite the time limits the management team might try to foist on a shoot, the artists featured in Rockin’ Garages understood the creative process and gave themselves over to it.

“Creative artists understood the passion and know how to do this stuff,” Ross says. “And people bent over backwards, they were so cool. To have a cheeseburger with Arlo Guthrie, that’s pretty surreal.”

Ross is a former actor, musician and professional model represented by the prestigious Ford agency (“I was the face of Coke and American Express in the 1970s,” he says). He shows selections of his work during Car Week at the Winfield Gallery on Dolores Street in Carmel and in a show at the Weekly’s Press Club on Fremont and Williams in Seaside.

Ross, a licensed photographer for Porsche, also will show his Bonneville work at the Chubb Insurance Tent at The Quail, A Motorsports Gathering, on Friday. TheWeekly caught up with him from his home in Marin.

Weekly: How did you go from being an actor and model in front of the camera to a photographer behind it?

Ross: As a Ford model, I had the opportunity to work with the best photographers in the world, and while everyone was paying attention to what was for lunch, I paid attention to other things. I started out shooting fragrance bottles and shooting models for composites. Then one day I bought a Porsche from Joan Jett’s old drummer. I saw the ad in the New York Times – I was living on the East Coast – and I went to his house and there was a drum set in every room.

I bought his 911 and joined a Porsche club and shared some of my photographs of the car with the club, and within a few years I married my passion for photography with my passion for automobiles. That’s how I got into it.

What do you do to make someone comfortable as you’re photographing them?

The musicians and professionals in Rockin’ Garage are used to being in front of a camera, but often when you’re not used to it, it’s easier to get a great image out of them. I have a conversation with them and try to communicate with them and find out what their passions are. The most important thing I tell people is, ‘An actor never wins an Academy Award for the way he delivers a line. It’s what’s going on in his face before and after he delivers a line.’ So when I photograph someone, I ask them to think about something different, whatever their passion is, to take their minds off of what’s going on.

But how do you get a car to express itself in that way?

There are some pretty charming shots in Rockin’ Garages, even if you’re not into cars. Some of my favorites are Billy Joel with his Kawasaki W650, which he’s named “Sacred Cow.” I never knew he was so into motorcycles before I saw these pictures, but he looks so serious in some of them too.

The reason he’s so serious is because it was below freezing or close. I wanted to photograph him in front of the railroad station in Oyster Bay. He’s responsible for bringing a lot of Oyster Bay back to life. So we rolled the bike out, and I thought we were going a few blocks to the train station. He had no helmet on, and the next thing I know he’s driving it. ‘Oh my God, he’s on the bike,’ I thought. And I knelt down and fired off three frames.

Of all the weird experiences you had making this book, what’s at the top of the list?

I don’t know if it’s weird, but it’s funny. You go to photograph Keith Urban and it’s another situation where they say, ‘You’ll have 20 minutes. Take three flights, land, rent a car, drive to the bear that looks like a rock, then drive to the rock that looks like a bear, take a right, drive up a dirt road, find the gate.’ So I get there and we’re working and I ask Keith, ‘What’s your favorite vehicle?’ And he says, ‘That’s easy, mate! My pickup, a ’72 Chevy!’

I wanted to photograph him driving it. I was going to jump out of the truck and have him drive past me, and I would do a panning shot. There was a slight embankment and it had rained, and I feel my right leg going out from under me, so I take the camera and protect it and tuck and roll. Everyone is standing there with their mouths open, and I can tell they’re thinking, ‘Oh God, he’s gonna sue, we’re on Keith’s property,’ and then Keith calls out, ‘Are you OK, mate? That was the most unbelievable commando-style tuck and roll I’ve ever seen in my life!”

I knew I had passed the audition when a 20-minute shoot went more than two hours and he asked me, ‘Hey mate, wanna photograph the motorcycles?’ and then starts pulling them out.

Issue November 19, 2020 - How can Monterey County get out of the Purple Tier into the Yellow?