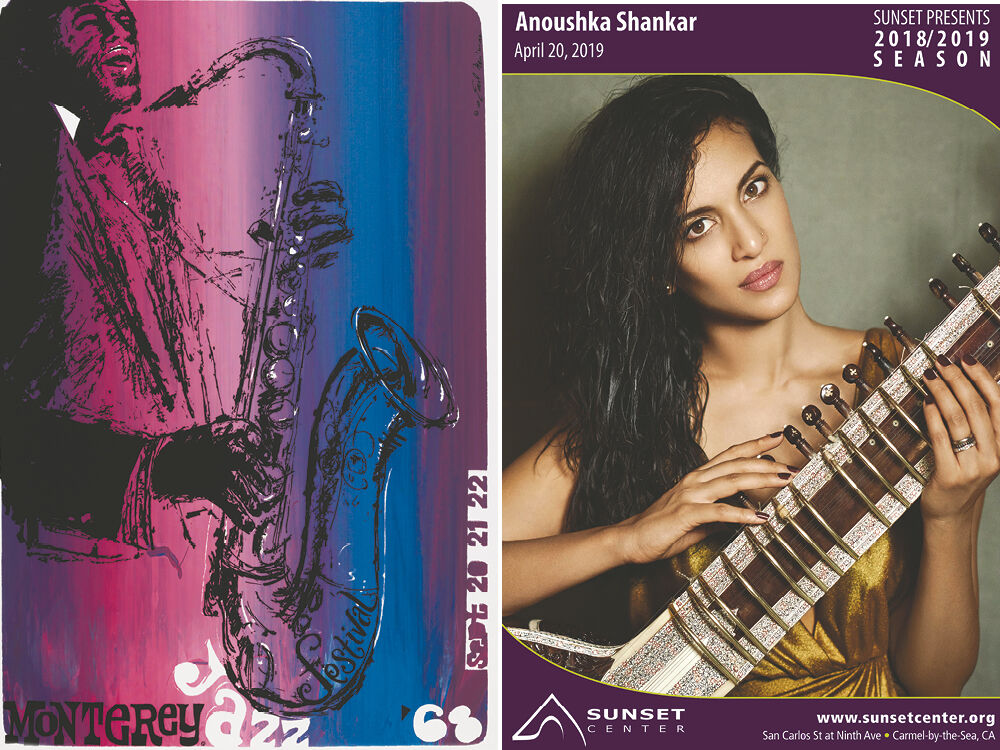 (right) The Monterey Jazz Festival in 1968. (left) Anoushka Shankar performed at Sunset Center in Carmel in 2019. She’s the daughter of Ravi Shankar, who made a splash with his performance at the Monterey Pop Festival in 1967. 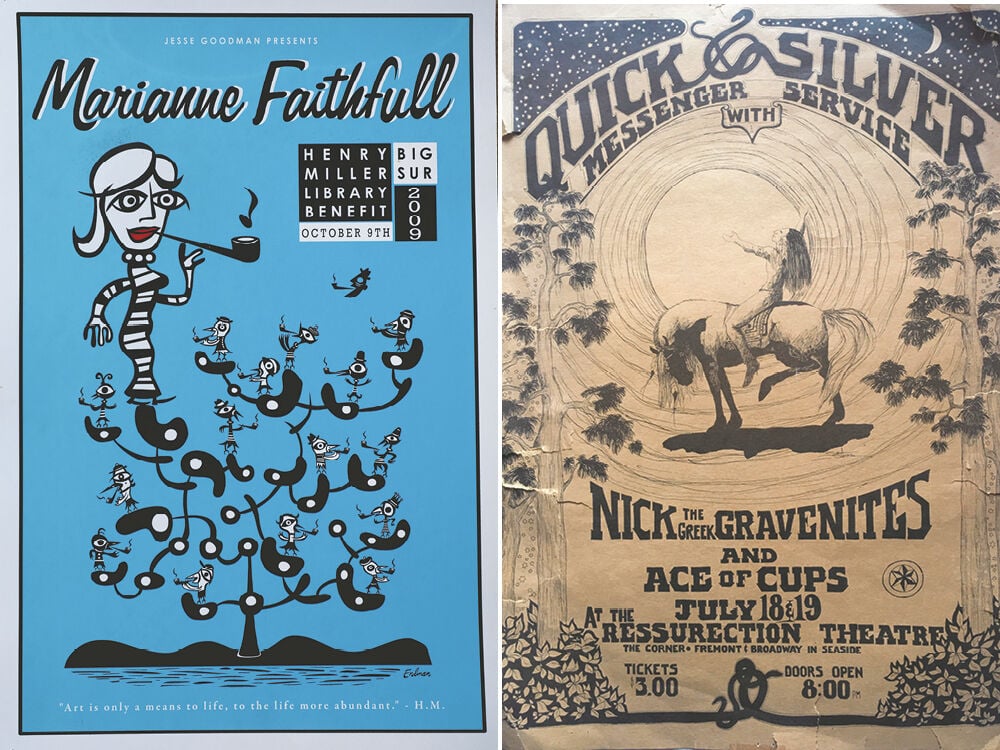 (left) A 2009 poster for Marianne Faithfull’s concert at Henry Miller Memorial Library in Big Sur. (right) The Resurrection Theatre (aka Del Rey Theatre) was home to a lively music scene in Seaside. Quicksilver Messenger Service played there in 1969, for $3 a ticket.

Local stages have been on fire – literally and figuratively. Jimi Hendrix famously lit his guitar on fire. A young Bob Dylan, Sly and the Family Stone, Janis Joplin and Otis Redding all ignited their careers here. Joan Baez and Joni Mitchell played at the Big Sur Folk Festival.

From the Carmel Bach Festival, founded in 1935, to the Monterey Jazz Festival, co-founded in 1958 by Jimmy Lyons and jazz critic Ralph J. Gleason, the institutions now considered major forces in the Central Coast community – and around the world – had modest, community-oriented beginnings.

Even 1967’s famed Monterey Pop Fest – which turned Jimi Hendrix and Janis Joplin into household names and introduced Otis Redding to a crossover audience – was a relatively free-form affair, inspired in part by the gigs the Jefferson Airplane and Paul Butterfield played the year before at the Jazz Festival. (See story, p. 25.)

The Jazz Festival’s Fairgrounds venue, a departure from smoke-filled nightclubs, was modeled on the setting of the Newport Jazz Festival, which was organized in 1954 by legendary promoter George Wein, who just died earlier this year. But the backing was significantly different; Newport was initially financed by tobacco heiress Elaine Lorillard.

The Festival was world-class from the start, though – opening night included Dizzy Gillespie’s rendition of “The Star-Spangled Banner” and performances by timeless greats Louis Armstrong and Billie Holiday. One of Jackson’s favorite memories since joining MJF in 1992 was the Miles Davis tribute with Wayne Shorter, Herbie Hancock and other Davis sidemen, held the same year. But at the beginning, “it was definitely more of a grassroots thing,” Jackson allows.

The Big Sur Folk Festival, organized by Joan Baez’s friend Nancy Carlen, was held at Esalen from 1964 to 1971 (it moved to the Fairgrounds the next to last year, featuring Richard and Mimi Fariña and the Beach Boys.) The movie Celebration at Big Sur, about the concerts held a few months after Woodstock, features Baez, the Fariñas, Joni Mitchell and Crosby, Stills and Nash. Stills got in a memorable fracas with a heckler.

And locals with long memories may recall the time in May 1963 when Baez introduced her young friend Bob Dylan at the Monterey Folk Festival held at the Fairgrounds. (Dylan’s set was not well received until Baez scolded the crowd, joining him for his closing number, “With God On Our Side.’’)

The same spirit of improvisation also marked the early days of the Carmel artistic scene, when artists, musicians and writers fled San Francisco after the 1906 earthquake.

The local music scene would be unalterably changed in 1924, when a talented pianist named Dene Denny and her partner, artist Hazel Watrous, left their Russian Hill apartment in San Francisco for Carmel-by-the-Sea.

This dynamic duo, the local equivalent to Gertrude Stein and Alice B. Toklas, dabbled in theater productions at the Golden Bough Theater before helping to found the Carmel Music Society and, in 1935, the budding Bach Festival (see story, p. 30).

Initial costs of the eight-concert “Summer Series and Bach Festival” were paid from ticket sales, with the remainder picked up by Denny and Watrous, along with a sizable donation from wealthy local arts patron Noel Sullivan, according to Carmel Impresarios: A Cultural Biography of Dene Denny and Hazel Watrous, by James W. Gordon, a former Bach Festival dramaturge.

“At a City Council meeting on July 9, a motion was made to appropriate $100 to help defray the cost of the Bach Festival,’’ Gordon writes. Another note in the book: When they arrived in Carmel, the two were registered Republicans but by 1926, Denny was an avowed Socialist and Watrous a Democrat.

“These are people who clearly loved and treasured the beauty of art in all its configurations,” says Bach Festival Executive Director Scott Friedlander. “If there’s anything we try to preserve, it’s creating or recreating opportunities to come together to experience music joyfully, and enjoy the emotional uplift that comes from that experience.”

“These women were determined that this community should have a music festival,” adds Scott Seward, Bach Festival spokesperson. “The first year was the 250th anniversary of Bach’s birth, so that fell naturally, and had a nice ring to it. But the next year, they actually thought about calling it the Mozart Festival.”

“It’s been a year,’’ Friedlander says. “Our last live concert was in July 2019. This season has been a couple of years in the planning and we’ve been through every scenario from another cancellation to moving the entire festival outdoors. What can I say? We managed to keep the lights on.’’

THE MONTEREY BAY AREA HAS LONG BEEN A RICH SOURCE OF ARTISTIC INSPIRATION.

To name just a few: In 2016, John Wineglass, the Monterey Symphony’s composer-in-residence, collaborated with the Symphony on “Big Sur: The Night Sun,’’ a massive work featuring a drum made from a redwood tree. Wineglass also spent time at Glen Deven Ranch, a property that spans a redwood-lined canyon and a magnificent Big Sur ridgetop owned by the nonprofit Big Sur Land Trust, which in 2012 also co-sponsored a commissioned residency, leading to MJF guitar hero Bill Frisell’s Big Sur composition, an album inspired by his time on the ridgetop.

Saxophonist Charles Lloyd’s 1992 album Notes from Big Sur was inspired by the time he lived down the coast, on pause from the jazz scene after his breakout performance of “Forest Flower” at the Jazz Festival earned him crossover gigs.

“We were young idealists – not thinking about that chilly afternoon, and certainly not about making history. FM radio was much more free-form – they would play my music, Ravi Shankar and maybe the Doors or Dylan in sequence,” Lloyd recalls by email. “Someone said I should play the Fillmore – when I asked who played there, they said Muddy Waters. I said sure. The audience went crazy and wouldn’t let us off the stage.

“I get flashbacks of the wonderful vibes of the audience that day when I drive to the Fairgrounds [for MJF performances],’’ he adds. “But I have ‘beginner’s mind’ and as I walk onstage, I am in the now with a different set of musicians. We are intent on finding those notes that will take us into the stratosphere.”

Minimalist composer Philip Glass has avowed that the natural beauty of the surroundings were key to his decision to set his Days and Nights Festival in Monterey County, which debuted in 2011. The Hidden Valley Music Seminars in Carmel Valley, with a regular rotation of musicians at the height of their careers instructing rising stars, and the Cali Roots Festival, now 11 years old, also offer regular, if very diverse, programs to music lovers. Recently it’s become the centerstage for the new Ballare Carmel dance troupe and its resident artists.

The bohemian spirit, which so attracted those living in San Francisco a century ago, is alive and well in Big Sur at the Henry Miller Memorial Library, which has featured performances by everyone from Patti Smith and the Red Hot Chili Peppers to Father John Misty, Joanna Newsom, and the Fleet Foxes, while equally cool acts routinely play the Fernwood Resort and Bar.

Since 2001, the West End Celebration in Sand City Festival has featured everyone from Maria Muldaur and the Medflies to Salinas-born, Santa Cruz-based Jackie Green, local hero Rushad Eggleston, Johnny Rivers and former Monkees member Michael Nesmith, who made history when he filmed the first rock video in Sand City around the corner from his Videoranch headquarters.

“In the very beginning, the stage was a flatbed truck on the far end of Ortiz Avenue,” longtime West End organizer Stephen Vagnini says. “The Big Sur Natives played,” and their percussionist was dating a woman who ran an international dance troupe. “They came out to perform with nothing but paint on. The last thing I remember is the police chief coming on stage, twirling his baton.”

All these years later, they still keep things funky – the crowds are bigger, but mostly local, as old friends meet and greet each other at the annual homecoming.

“Big is not necessarily better,” Vagnini says. “We may not have the big concerts here, but community events are more intimate. Do you remember that book Small Is Beautiful? I really believe that.”

While the Monterey Blues Festival has had a rocky road, Seaside’s free Blues in the Park’ series has been going strong for the last 33 years.

Another side benefit: No audio or video recording allowed.

Turn off those cell phones, get out there and boogie.

The road goes on forever, with a few meandering turns.

A Short History from Bach to Rock.