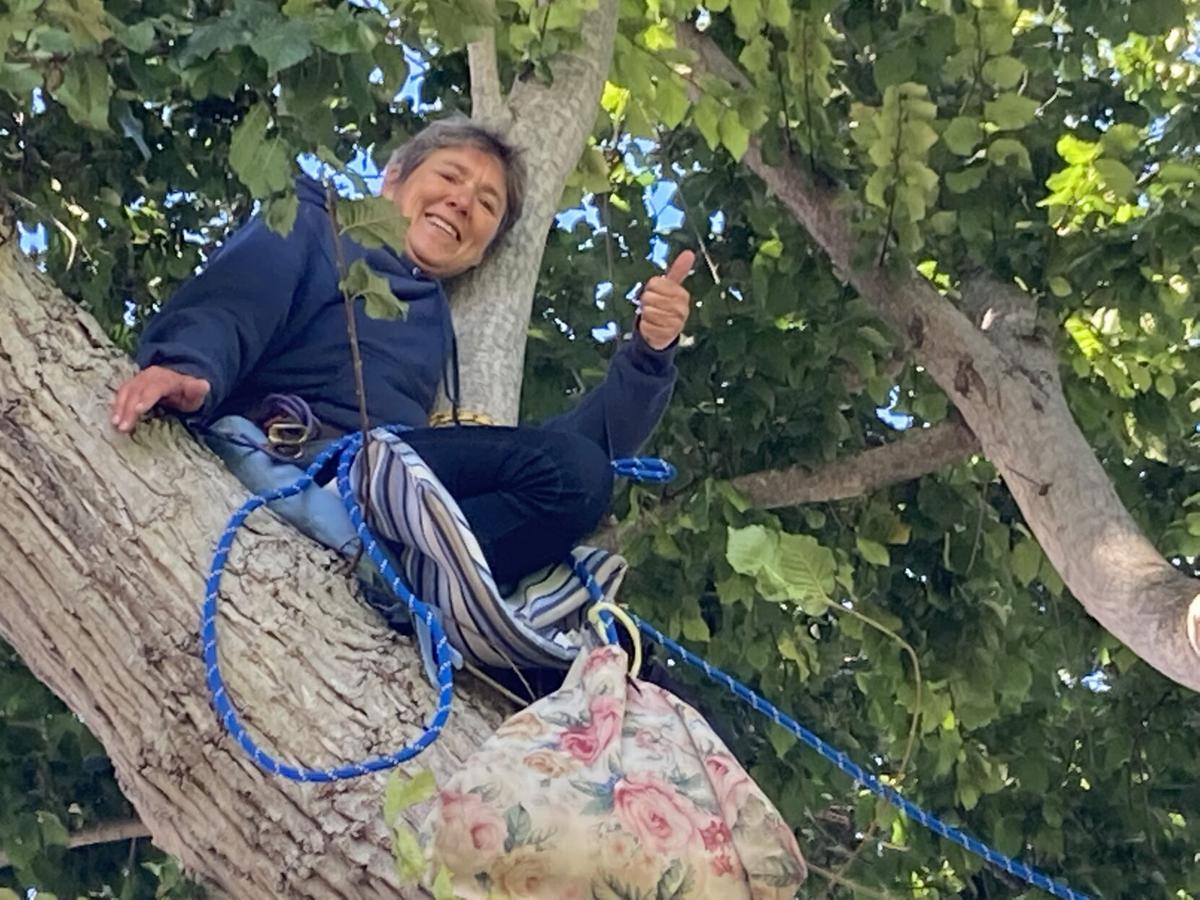 Rebecca Lee sitting about 20 feet up a 40-foot tall American elm tree on Sept. 30, 2021, in Jewell Park in Pacific Grove, in an attempt to stop the city from removing it. 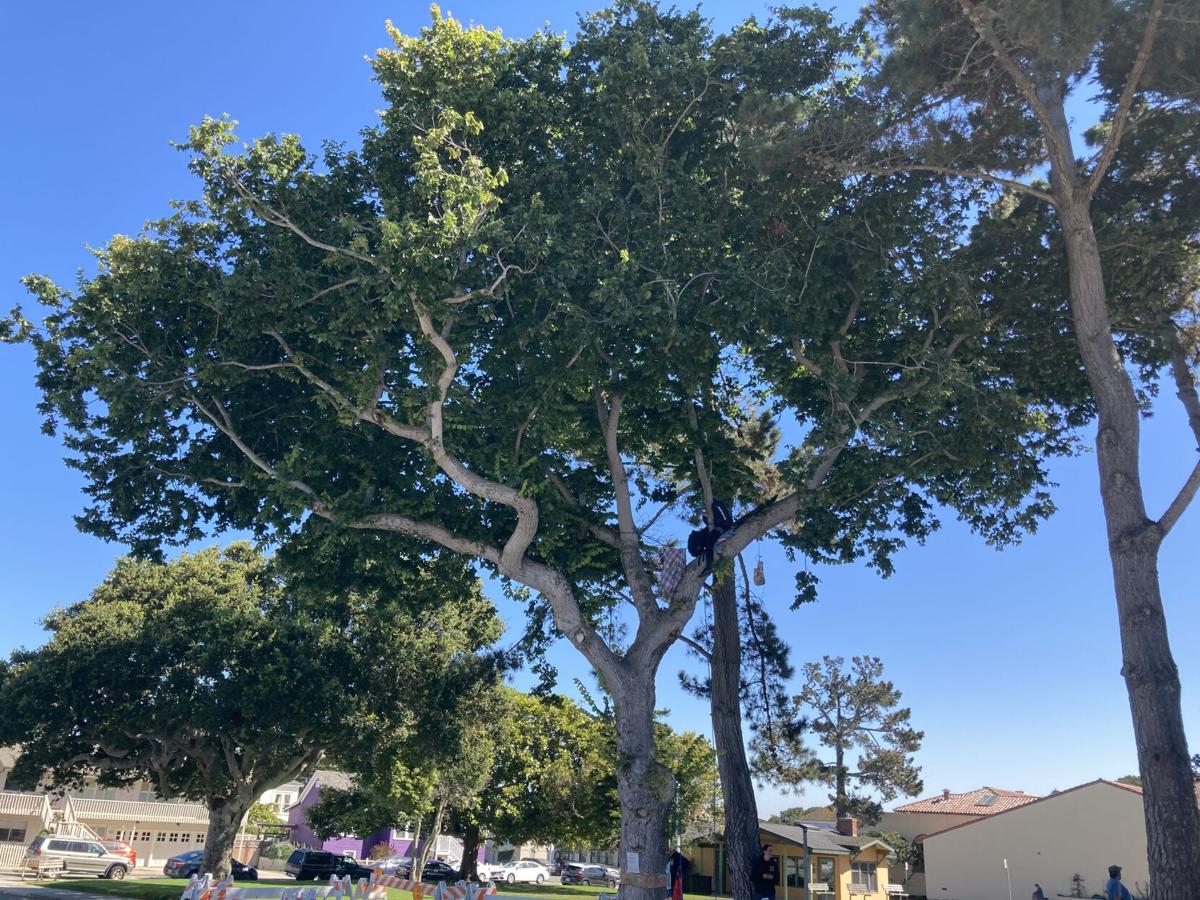 The American elm in Jewell Park in Pacific Grove slated for removal. A city arborist says there is decay below and that the tree is leaning. An arborist hired by protesting residents disagrees.

Rebecca Lee hit her breaking point when the Pacific Grove City Council voted 6-1 on Sept. 15 to deny an appeal of the removal of a 100-year-old American elm tree from Jewell Park. It wasn't the first time the city had opted to remove a tree over the protests of residents.

A contractor was scheduled to arrive at 6:30am this morning to begin removal of the 40-foot-tall tree, deemed a "high risk" by a city arborist. So Lee showed up at 6am and used an extension ladder and ropes to hoist herself up onto a large branch of the tree, approximately 20 feet off the ground. Her goal is to remain in the tree while an attorney hired by residents gets an injunction in Monterey County Superior Court today.

"I just knew I'd feel like crap if I didn't," she says from her perch. It is her very first act of civil disobedience.

Soon after the tree company workers showed up, the Pacific Grove Police and Public Works Department were called. A police officer advised her she was trespassing. All of Forest Avenue was blocked off between Central Avenue and Park Place.

The tree company and city officials left, but a small group of supporters remained, with a steady stream others showing up through the day to wish her well and see if she needed anything. One person offered to pay Lee's bail should she be arrested.

Using the rope Lee brought, they began ferrying up supplies like nylon chair pads to make her seat more comfortable and snacks. At one point she sent down her cell phone so it could be charged and returned back up the tree. A man asked if she wanted any scotch sent up. Lee laughed, and said she doesn't like scotch, but maybe bourbon, adding on second thought it might not be a good idea getting tipsy that high off the ground.

The saga of the elm tree began in July when a construction supervisor requested the tree be removed out of the way of a new sidewalk project. The city brought in its contract arborist, Albert Weisfuss, who reported back that he thought the tree was in decline, suffering from rot, leaning to one side and thus needed to be removed for safety reasons.

That prompted neighbors Patricia Purwin and Charles Schwartz, who live across the street from the tree in an 1895 historic home, to appeal the city's decision. They paid the $216 fee for the appeal. The issue went to the Beautification and Natural Resources Committee on Aug. 17. The appeal was upheld, prompting the city to make its own appeal to the City Council.

On Sept. 15, the council heard two hours of public comment from residents who argued the tree isn't in as dire a condition as Weisfuss reported. Despite their pleas, the council voted 6-1 to deny Purwin's and Schwartz's appeal. Councilmember Luke Coletti was the lone "no" vote

Purwin and others circulated a petition, gathering around 300 signatures in short order. They hired an independent arborist who declared in his opinion the tree was still healthy and didn't need to come down.

Purwin says there are options, including building the sidewalk around the tree, which would remove two parking spaces. (In an agenda report, city staff rejected that option, in part because of the need for parking so close to the Pacific Grove Museum of Natural History, the Pacific Grove Public Library, Lovers Point and downtown.)

The neighbors also contacted attorney David Hollingsworth, who came out to look at the tree and agreed to take the case. He scrambled yesterday and today to get an injunction.

Lee thought the injunction would come quickly, but by mid-morning it became apparent it might not be today. She remained all day and plans to come down tonight. The residents are planning on asking the city council to reconsider their decision.

City Manager Ben Harvey says the city is not taking down the tree at the moment. "We don't have the tree's removal scheduled at this point," he says. The situation will be evaluated on a day-by-day basis. "It's leaning at a good angle but I don't think it's going to fall down today," he says.

Should the residents get an injunction, the city will respond, he says. "We understand there could be some type of legal action, in the meantime we’re not pulling anybody out of the tree."

Another P.G. resident, Bob Oliver, is one of the group racing to save the tree. He's adamant they'll be successful in their quest to save the tree and offers this prediction for City Council if the tree comes down: "These guys won't even be able to run for dog catcher."

So, is she still up there? Did they cut down the tree? What's happened in the week since?