Going into the season finale, the four drivers with mathematical hopes of winning the IndyCar championship know where they need to be when the checkered flag waves.

Josef Newgarden comes into the races with an NTT IndyCar Series-leading 593 points, 41 ahead of Alexander Rossi. Simon Pagenaud sits 42 points down, while Scott Dixon needs a miracle to close his 85-point gap. But the race awards double-points – 100 for the winner – so big swings are possible.

What they don’t know is the race track itself. And that has every team on edge.

“As if the double-points race wasn’t difficult enough, we’re now heading to a circuit where most of us have never raced a single lap,” says Newgarden, driver of Team Penske’s no. 2 Hitachi Chevrolet. “It will be a challenging weekend, no doubt.” 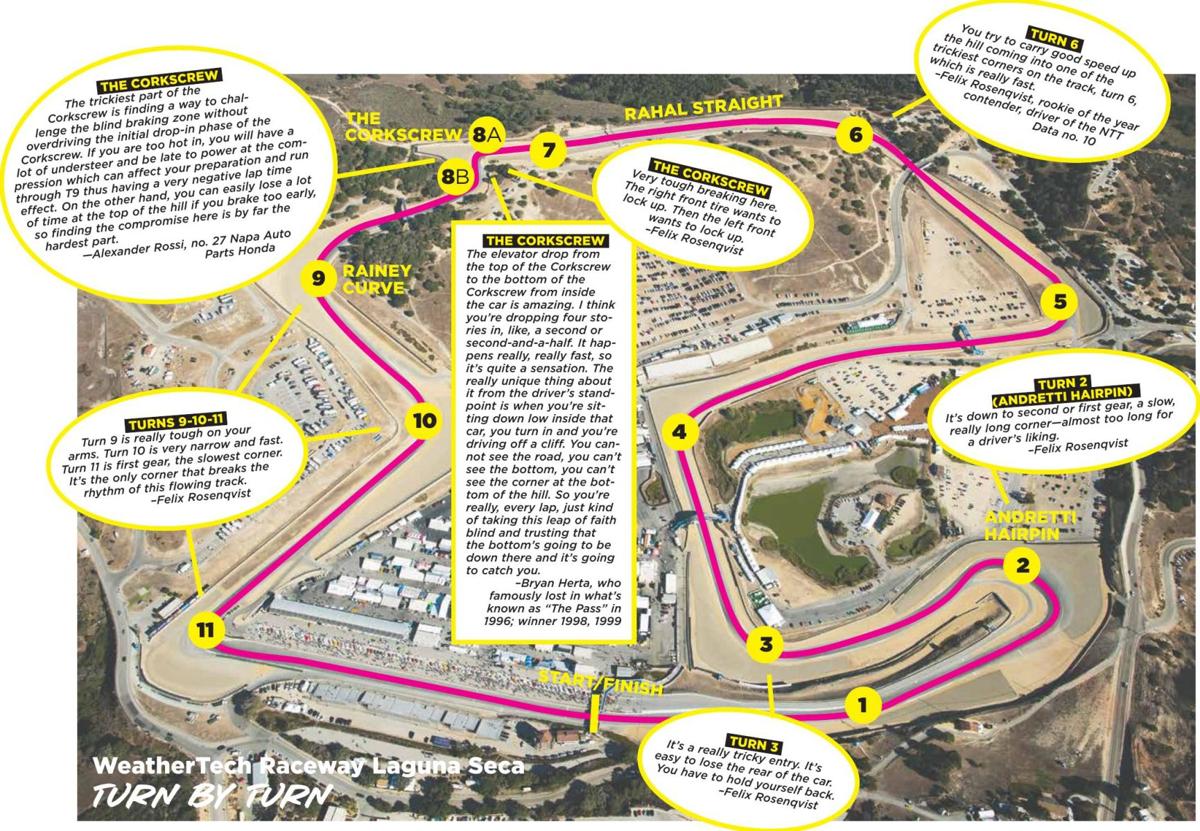 WeatherTech Raceway Laguna Seca was once a regular stop on the IndyCar schedule; America’s top open-wheel series last visited the famed track in 2004. Of the four title hopefuls, only Scott Dixon, who pilots the no. 9 PNC Bank Honda prepared by Chip Ganassi Racing, can draw on some IndyCar experience at Laguna Seca – just two starts more than 15 years ago. Veterans Tony Kanaan (five starts), Ryan Hunter-Reay (two starts) and Sebastien Bourdais (two starts) round out this exclusive group.

The Weekly asked drivers about the defining turns that make up the track (see graphic, right). Most admitted they have no idea what to expect. Newgarden says that after just an hour of testing on a dirty track in February, it was difficult to know.

“You’ll see a lot of mistakes being made,” predicts Felix Rosenqvist, driver of the no. 10 NTT Data Honda and Dixon’s teammate. While Rosenqvist is not in the hunt for the overall title, he is currently tops in the Rookie of the Year chase, ahead of Santino Ferrucci and Colton Herta, who both have a shot.

Rossi dismisses a one-day test session held at the track in February as inconsequential.

“It’s a blank slate for everyone – that’s exciting,” the driver of Andretti Autosport’s no. 27 Napa Auto Parts Honda told reporters in a press conference the week before the Sept. 22 race. “It will definitely reward the team and the drivers that come to grips with everything the quickest. It will probably reward them with a championship.”

Ah, yes – the numbers. The race distance is 90 laps of the famed 2.258-mile course. Should Rossi navigate this ahead of the other 23 cars, he would need Newgarden to cross the line in 6th position or worse.

Rossi says he is “very confident” of the team’s chances for a title, given the double-points on offer. “With that being said, we need to win in order to make our lives easy and that is always a daunting task in this series,” he adds. “If we come out of the gate strong on Thursday with a quick car, then we will be optimistic of what is to come.”

A Pagenaud victory would mean the championship if Newgarden met the same fate. Dixon’s title hopes involve a win, with Pagenaud dropping to 6th or further back, Rossi no closer than 7th and Newgarden suffering something catastrophic.

There are other scenarios – IndyCar complicates matters with bonus points for such things as taking the pole in qualifying, but that’s the gist. If there is a glimmer, it’s that Newgarden’s average finish on road courses this year is 7th. If there is a consensus, it’s that a win on Sunday starts with a solid qualifying lap on Saturday.

“It’s a tough track,” said Michael Andretti, owner of the Andretti Autosport entries and a two-time winner at Laguna Seca. “You know track position is very important so qualifying is going to be really, really important as well for the outcome of the race. There’s going to be a lot of pressure on the guys to put in a good lap.”

If history is a measure of things, the three-round knock-out qualifying format may indeed determine the outcome. In the 22 IndyCar races held at Laguna Seca in the past, 14 were won by the polesitter (the driver who puts in the fastest qualifying time and starts first).

“I’ve been saying for a while this championship could be decided in qualifying at Laguna,” Rossi told reporters. “It’s no secret that we’re expecting it to be a challenging race to pass.”

So it appears the race and the title will come down to each team’s learning curve during testing on Thursday and practice Friday and Saturday.